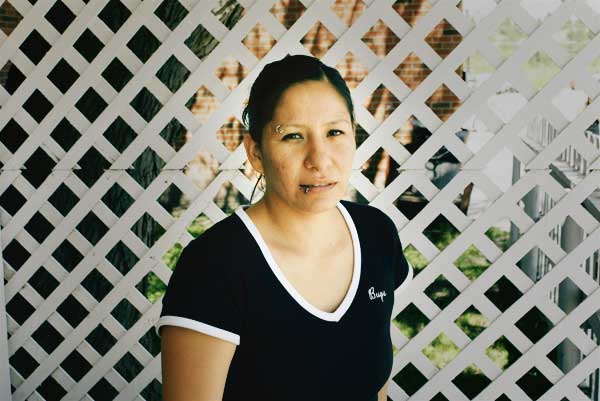 Leondra Little Thunder, a Rosebud Sioux, shares her fractionated land with her sisters and many others. (Photo by: Perry Decory)

This Land Is Our Land

How a 19th-century law that ‘allotted’ reservation lands led to the federal government’s largest-ever lawsuit settlement.

‘We are compelled to settle now by the sobering realization that our class grows smaller every year, every day, as our elders die,’ says Elouise Cobell.

Joseph Reynolds knew that he owned land on the Rosebud Sioux Reservation in South Dakota, but he didn’t know exactly where. Reynolds, who inherited the land from his grandparents, believed as many as 1,000 acres were waiting for him to build a life on. In 1971, when he moved back to South Dakota from California, the then-23-year-old contacted the federal Bureau of Indian Affairs (BIA). They sent him a 12-page document detailing his inheritance.

Reynolds visited the reservation’s BIA office and asked if officials would show him what he owned. One man told him: “I’ll take you out there. And that baseball cap you’re wearing–you can just throw it in the air and wherever it lands, that can be the land you own.”

Reynolds quickly discovered that, thanks to a Byzantine federal system of managing tribal land, he had inherited only a fraction of his grandparents’ property title.

That discovery was the result of “fractionation,” a practice dating back to the 1887 passage of the General Allotment Act, also known as the Dawes Act, which intended to “civilize” Indians by assimilating them into a sedentary, agrarian lifestyle. The legislation divided 138 million acres of communally owned tribal land across the nation into 160-, 80- or 40-acre parcels. The government distributed those parcels to individual tribe members, but at the same time still held the land in trust, believing Indians incapable of managing their own affairs. It was, and to this day remains, a system rooted in the government’s racist assumption that it can manage Indian reservations better than Indians.

Indians cannot sell or lease their trust land without federal approval, and the government is supposed to distribute any revenues earned from the land (through leasing to farmers, railroads, mining companies and other private interests) to the individual landowners. As soon as the first allottees died, the government began dividing property among their descendents. But heirs did not inherit pieces of land with specific boundaries. Instead, they inherited fractions of the title–a title held in trust by the federal government. This system leaves most allotment heirs with tiny, in effect unusable, fractions of ownership.

Today, 30 percent of federally recognized tribes living on reservations across the United States own fractionated land. Fractionation makes land management incredibly complicated for both tribes and individuals. It also costs the federal government a lot of money in administrative and probate court costs. (Many Indians don’t leave wills detailing who should inherit their land because they aren’t aware of what they own.)

The federal government now manages approximately 56 million acres of trust land on behalf of tribes and Indian landowners. As of 2009, those acres were distributed into 153,950 allotments divided into 4.5 million “fractionated interests.”

In December 2010, President Barack Obama signed into law a $3.4 billion settlement to end a 14-year-old class-action suit against the federal government. Cobell v. Salazar accused the government of mismanaging income earned from leasing out 11 million acres of reservation land. Elouise Cobell, a banker from the Blackfeet Nation in Montana, filed suit in 1996 after noticing inconsistencies in paying landowners the lease income they were due. In other words: Indians were getting ripped off.

When announcing the settlement in December 2009, President Obama said, “With this announcement, we take an important step toward a sincere reconciliation between the trust beneficiaries and the federal government, and lay the foundation for more effective management of Indian trust assets in the future.”

Cobell is less sanguine. “This is significantly less than the full benefit to which Indians are entitled,” she said. “We are compelled to settle now by the sobering realization that our class grows smaller every year, every day, as our elders die.”

Approximately 500,000 people around the country–members of more than 150 federally recognized tribes–are eligible to benefit from the settlement, according to Justin Guilder, an attorney for the plaintiffs.

Helmina Makes Him First (the woman whose visage graces the cover of this issue) is a 70-year-old Sioux living in Little Eagle on the Standing Rock Reservation. She owns fractionated interests on four reservations: Fort Peck in Montana, and Pine Ridge, Cheyenne River and Standing Rock in South Dakota.

“Cobell has done the research and brought everything out from under the table,” says Makes Him First. “The native people need the funds. I am happy that some of our people will benefit and be able to buy what they need before they go back into the spirit world.”

But critics say the cash payouts, which will begin no earlier than August 2011, are small comfort to Indians eeking out a living on reservations, where one in four lives below the poverty line and one in two is unemployed.

Supporters say that by buying fractionated interests from individual landowners and turning titles of those properties over to the tribes, the settlement will allow tribes to develop fractionated land, give allotment owners an opportunity to sell their interests and save the government money it would have spent on administering individual trust accounts. Members of the class action suit will receive $1.5 billion, about $1,000 per person if everyone eligible applies. And $60 million is earmarked for a scholarship fund to help Indians attend college or vocational school.

Asay No Braid, who owns land on the Pine Ridge Sioux Reservation in South Dakota, wanted to exchange a 177-acre tract he inherited outright from his grandfather for a slightly smaller tract of tribally-owned land near his sister. The siblings wanted to raise buffalo together. So in 2009, he applied to both the BIA and his tribe for the exchange and waited–but not quietly. “My older sister said ‘Call them and bug the hell out of them.’ So that’s what I did,” No Braid says.

After a few months, the reservation’s land office approved an exchange for a 160-acre tract of land. But when No Braid’s BIA appraisal came back, he found out his allotment land was worth more than the land he would receive. Hoping for an even trade, he tried for a different tract near a highway that he thought would be good for buffalo.

A month later, No Braid found out that his request to the tribe had been rejected because the highway tract was slated for tribal development. He weighed his options for two months before finding out that the BIA had terminated his application.

Indian reservations are full of stories like No Braid’s. Sharon Redthunder of the Nez Perce tribe wanted to buy out her land’s co-owners on the Colville Reservation in Washington. But banks wouldn’t allow her to take out a loan against property that wouldn’t be fully hers until after she received the loan. Redthunder was stuck, unable to leverage her own land.

LeMoine LaPointe’s Lakota Sioux family stopped receiving lease checks from its land in South Dakota in the early ’90s because the federal government bought it without his mother’s or uncle’s consent. LaPointe believes the sale was related to an archaic 1906 law that allowed the land belonging to “incompetent” owners to be put up for sale, but unless he hires a lawyer, he says, he’ll never know what happened to the land or who sold it.

The bureaucratic system birthed from fractionation makes it almost impossible for Indians to actually live on or develop land they officially own. Owners’ options vary, but they are invariably complicated because so many people hold title to the same piece of land. Any tribal or individual decision on land use has to be agreed upon by at least 50 percent of a tract’s owners. (The average allotment has 17 owners, but some have hundreds.) And, as Redthunder discovered, buying out co-owners is complicated by banks’ unwillingness to deal with land held in trust by the government.

Cris Stainbrook is the executive director of the Minnesota-based Indian Land Tenure Foundation, which seeks to put all reservation land back under Indian control and management. “Indian people are smart enough to do this stuff. But the amount of persistence it takes is so far beyond what non-Indians have to go through, you can’t even imagine,” he says.

For example, Pine Ridge’s land exchange program, to which No Braid applied, requires no fewer than 12 back and forth interactions among various tribal and governmental offices.

Alleen Brown is a Minneapolis-based journalist whose work has appeared in the St. Paul Pioneer Press and at MinnPost.com. When she's not writing, she coordinates a community garden and enjoys her city's beautiful bike paths.