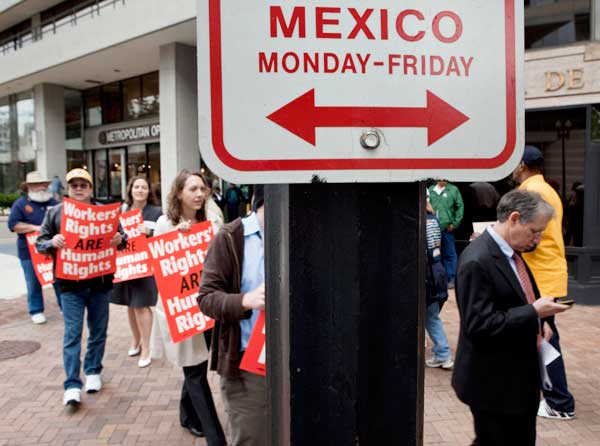 The Steelworkers demonstrate outside the Mexican Embassy on May 19, 2010, in solidarity with mineworkers on strike at Mexico’s Cananea copper mine. (Brendan Smialowski/Getty Images)

Steelworkers in the United States and Canada forge ties with Los Mineros in Mexico.

‘Clearly the Mexican government shares our analysis that if they can bust the Mineworkers union, that will go a long way toward its goal to eliminate union representation in the private sector.’

Despite the hard times befallen local mills and industry in Gary, Ind., the United Steelworkers’ District 7 union office still sits at the end of a dead-end road called Texas Street.

And despite how bitter many Americans have become about the North American Free Trade Agreement (NAFTA) since it was passed in 1994—intensifying outsourcing to Mexico and depressing wages for many remaining U.S. jobs—the United Steelworkers (USW) union has been ramping up relations with the National Miners’ and Metalworkers’ Union of Mexico, aka Los Mineros.

For the past six years, the Steelworkers have been motivated by the idea that fighting for better wages and conditions in Mexico is not only an act of solidarity, but could also protect U.S. jobs by bridging the chasm between labor costs and relieving the pressure for northern migration.

“Between us, Canada and Mexico the relationship is very tangible,” says Jim Robinson, director of USW District 7, which covers Indiana and Illinois. “We have two countries with roughly the same standards and one country with much lower standards. That creates a tremendous drag down on wages and working conditions in the U.S. We need to support Mexican workers so we’ll be on a level playing field.” According to the Bureau of Labor Statistics, in 2009 manufacturing workers in Mexico made only $3.93 an hour on average compared to $23.03 for workers in the United States.

The “current wave of solidarity,” as USW International Affairs Director Ben Davis calls it, was sparked by the Mineros’ support of U.S. Steelworkers who were on strike at Asarco copper mining and smelting operations in Arizona in 2005. Many Mineros members work at mines and other operations owned by the politically-connected company Grupo Mexico, which owns Asarco. A solidarity agreement between the two unions was signed that year. Now, when an employer is hostile to the union on one side of the border, members on the other side can apply pressure through letter-writing, picketing at consulates and public-awareness campaigns.

In June 2010, the two unions went further, announcing the formation of a joint commission charged with exploring how the two unions might create a “unified North American organization” spanning Mexico, the United States and Canada and the Caribbean. If the merger occurs, the new USW-Mineros union would represent more than 1 million workers–the USW has 850,000 members, while the Mineros has 180,000. “It’s really important for us to have strong trade union relationships in the industries and companies that we work in,” Davis says.

USW members from Johnson Controls Inc. and Dana Holding Corp. auto parts factories and the American Steel Foundries in Granite City, Ill., have participated in worker exchanges to visit Mexican workers and Mexican workers have come to the United States.

In April, a large delegation of Steelworkers marched with Mineros in Lazaro Cardenas, in the state of Michoacan, to commemorate the fifth anniversary of a 2006 confrontation that left two workers dead and many injured during a bitter strike at a steel mill at that time co-owned by a politically-connected Mexican corporation and ArcelorMittal (which, also owns a steel mill in East Chicago, a town next to Gary). No one has been arrested for the killing of the two workers, and “numerous crimes against [the Mineros] continue with impunity,” according to an International Labor Organization complaint filed by the International Metalworkers Federation, of which USW is a key affiliate.

In the past few years, Steelworkers-Mineros solidarity has been most prominent around the long-simmering and brutal labor dispute at the massive open-pit copper mine owned by Grupo Mexico in Cananea, south of the Arizona border.

A labor uprising there a century ago helped spark the Mexican Revolution, and miners have been launching various militant actions since. In 2007 they went on strike over atrocious working conditions and other issues, including the company’s closing of the health clinic that had served miners and their families.

In Mexico it is illegal to operate a business where workers are striking, but the Mexican government ruled the Cananea strike “nonexistent,” and Grupo Mexico resumed operations. Meanwhile, the strike continues. Several times police have descended on the town, violently attacking strikers and their families. Striking miners are subject to constant threats, beatings and illegitimate arrests. Delegations of USW members from around the United States have visited Cananea various times, most recently last summer.

The Cananea strike is inextricably linked with Grupo Mexico and the Mexican government’s campaign against Napoleon Gomez Urrutia, the elected leader of the Mineros, who has been living in exile in Canada since fleeing criminal fraud charges that his supporters say are trumped up as part of the government’s campaign against the union. He now works out of a Steelworkers office in British Columbia and often speaks at Steelworkers events.

On an April afternoon, USW’s Robinson chatted with Gomez Urrutia by phone about the celebrated release from prison of Juan Linares–a Mineros leader at a Grupo Mexico-owned mine in San Luis Potosi who had been jailed on spurious charges since December 2008.

“The international pressure exerted by the United Steelworkers has really been a great support,” Gomez Urrutia tells In These Times, noting Linares was released shortly after international days of action in February organized by the Steelworkers and other unions.

The Mineros are one of the few independent unions in Mexico. As a result, major employers and notoriously corrupt government officials who back the companies see them as a direct challenge. Gomez Urrutia notes that in the past five years, 12 Mineros members have been killed and about 100 wounded by gunshots during labor battles.

“We’re probably one of the biggest unions in Mexico. We are very democratic and independent,” says Gomez Urrutia. “So the government targeted us because they want to destroy one of the most democratic unions, and then they will continue with the rest of the unions they don’t like.”

The government began calling for Gomez Urrutia’s arrest after he demanded an investigation of Grupo Mexico and government officials related to the 2006 explosion at the Pasta de Conchos coal mine that killed 65 workers. Gomez Urrutia says the union had been complaining of unsafe conditions at the mine for years.

“Here’s a case of the government simply coming in and saying, ‘We are going to remove the elected leader of this union,’ ” Davis says of Gomez Urrutia. “It’s a direct confrontation, clearly the Mexican government shares our analysis that if it can bust the Mineworkers union, that will go a long way toward its goal of eliminating union representation in the private sector.”

Davis says only about 1 percent of Mexico’s workforce is organized in “something we would recognize as a democratic trade union.” Most Mexican unions, Davis explains, “are labor organizations but not organizations represented by the workers and they don’t fight for higher wages.” These unions are typically called “protection unions”; Grupo Mexico installed one at Cananea after bringing in new workers to replace the striking Mineros.

“The Mexican government has a clear policy of keeping wages down, marketing Mexico internationally as a low-wage country that serves as a cheap export platform to the U.S.,” says Davis. “We think it’s a policy very destructive to Mexican workers and to U.S. and Canadian workers. The only way you can fight back is to build representative unions in Mexico that have the capacity to stand up to companies and the Mexican government.”

In the early 20th century, miners in the southwest would regularly rotate between working at mines in Mexico and the United States. Consequently, there are deep family and cultural ties between miners in Arizona, New Mexico and Mexico. And since Northwest Indiana and the Chicago area have long been destinations for Mexican immigrants, many USW members have close ties to Mineros in Mexico. During the April visit to Lazaro Cardenas in April, one member of the Indiana Steelworkers’ delegation ran into his uncle working in the Mexican mill.

Blanca Morales was born in Monterrey, Mexico, and came to northwest Indiana at age five when her father, a glassblower, got work in the steel mills. Morales worked at Inland Steel–now ArcelorMittal–for 25 years before being laid off in 1997, and later started working as an administrative assistant for the Steelworkers at the union’s Gary office.

In 2008 she and other members of the group Women of Steel went on a delegation to Cananea, where they met with the Women’s Front–Mineros’ wives who have been key to maintaining the strike and struggle. Grupo Mexico controls the town’s water and electricity supply and intermittently cut off these resources as part of their offensive against the Mineros. So women had no way to wash cloth diapers. The Women of Steel raised money for disposable diapers, the beginning of a close relationship between the two groups. Morales and her U.S. colleagues got the idea to sell solidarity T-shirts as a fundraiser, starting at USW’s international convention in 2008 and at countless conferences and events since.

“If it wasn’t for T-shirts, Steelworkers wouldn’t have a wardrobe,” jokes Morales, noting the campaign is about raising both funds and solidarity for Cananea. She exchanges e-mails daily with Maria Rosa Guayane Garcia, the president of the Women’s Front, who was forced to leave her home after an arrest warrant was issued for her last year.

“It’s a sisterhood,” Morales says. “Look at how strong they are. It’s such a beautiful story in so many ways.”