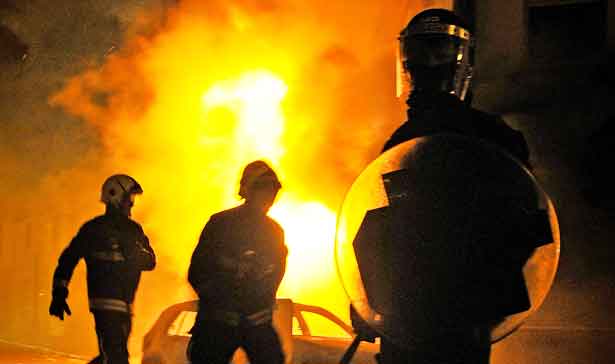 London firefighters work to put the neoliberal order back together after August's riots. (Photo by: Carl de Souza/AFP/Getty Images)

When a Paradigm Falls and Nobody Hears It

The neoliberal status quo is indefensible—yet the public silently accepts its supposed legitimacy.

The neoliberal dream was basically the economic version of what utopian-minded tech prophets call the singularity: the coming near-mystical convergence of forces.

Future historians will be hard-pressed to know what to make of the giddy reveries of the 1990s. It was not merely the age when sage interpreters of the world system declared the end of history, ideology and other assorted curdled leavings of the modern age; it was also the moment when the global economic order was supposed to be reaching its own great moment of singularity under the placid technocratic rubric of “neoliberalism.”

The neoliberal dream was basically the economic version of what utopian-minded tech prophets call the singularity: the coming near-mystical convergence of forces that would sort out the channels of information and production and knowledge work into a seamless, world-conquering whole.

As social paradigms go, that is plenty ambitious. But as Marxist theorist David Harvey notes, the neoliberal market consensus was also devised to shore up the far more brutish goal of restoring “power to economic elites”–a project that ultimately entails punitive top-down measures that tend to give the lie to the “liberal” side of this market-utopian formulation. Neoliberal societies are marked, he writes, by “a strong preference for government by executive order and by judicial decision rather than by democratic … decision-making.”

When we see the squeeze put on the institutions that shore up neoliberal economies, the results can look like a parody of the sort of popular sovereignty that defines plain-old liberal polities. Witness the disastrous agon that Washington conducted this past summer over the elevation of the debt ceiling: The leaders of our most popular branch of government, the House of Representatives, spun well beyond reach of anything like sane deliberation, hewing instead to a brand of market fundamentalism so extreme that it sent the markets themselves shuddering, once Standard and Poor’s downgraded the United States’ credit rating to AA+.

The S&P report on the downgrade insisted on the need to contain the country’s debt by raising taxes–a measure that the report’s authors rightly divined was a third rail in the present American neoliberal consensus. This point, of course, received virtually no serious attention from the major-domos of economic policy.

Meanwhile, in the eurozone–the sprawling economic bloc lovingly fashioned by the free-trade planners of continental neoliberalism–the specter of unstable debt produced a series of legitimation crises. Greek citizens rose up to protest government cuts that shred the social safety net to bolster the bottom lines of global banks. As the conservative government of Silvio Berlusconi in Italy likewise faced an austerity reckoning, the Italian prime minister-cum-media-mogul did the unthinkable and actually approved an increase in capital gains taxes, while enacting a tax surcharge on the nation’s high-income earners.

In England, meanwhile, working-class youth rioted, which led to draconian police crackdowns after the fact–since neoliberalism also thrives on punitive social control aimed at the lower orders. Because the English uprisings were far more generalized than the unrest on the continent, they betokened something profoundly unsettling to the traditional guardians of neoliberal verities. As Nouriel Roubini, the market savant who divined the onset of the global mortgage meltdown, noted in an eye-opening commentary, the summer’s popular uprisings “are all driven by the same issues and tensions: growing inequality, poverty, unemployment, and hopelessness. Even the world’s middle classes are feeling the squeeze of falling incomes and opportunities.”

Roubini stopped short of calling for the workers of the world to throw off their chains–but just barely. He raised an urgent cry for tighter regulation of “a financial system run amok” and even raised the specter of true neoliberal blasphemy: “more progressive taxation.”

When market-seers such as Roubini sound faintly like the reincarnation of Joe Hill, it seems a cause for real hope. But neoliberalism is adept at depoliticizing public discussion of economic policy. So his cri de coeur is likely to meet the same fate that has greeted neoliberalism’s critics on the left for the past three decades: deafening public silence.