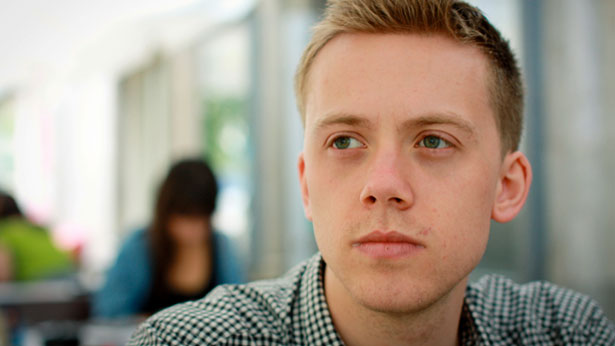 Owen Jones is working to put class back on the Left agenda. (Photo by: Rose Hall)

Chavs: The Demonization of the Working Class (Verso) is the first book of a young writer who is set to go far. Owen Jones grew up in Stockport, England, and received his first degree from Oxford. He worked in Parliament as a trade union lobbyist and parliamentary researcher, supporting the plans of back-bench Labour rebellions on issues from civil liberties to workers’ rights. He is just 27 and in the middle of a Ph.D. on the history of blue-collar America and the rise of the New Right. He lives in London.

Chavs takes its name from a term whose origins and meaning are contested, but which is clearly a class-based slur. The book had attracted considerable attention from the UK press even before the riots had laid waste to whole streets in several English cities during early August. Since then he has been invited to explain some of the background to these disturbances on radio and television in the UK. He has done so–as he does here–cogently, fairly and truthfully.

Chavs is clearly timely. We are in a strange historical moment when people have ceased to talk about class, at least in any of the traditional Marxist ways we were used to. What’s the most important thing you’d want to say about class at this particular moment?

Class has been intentionally shunted out of the way by the political and media establishment, the elites, if you like. So even as inequality and the gap between classes have grown bigger than ever, class was shot down.

Now, class has crept back on the agenda because the economic crisis focuses people’s attention on unjust distributions of wealth and power. In the last year, whilst the average Briton has had the biggest squeeze in their living standards since the ’20s, the pay for the FTSE [an independent company jointly owned by the Financial Times and the London Stock Exchange] 100 chief executives has gone up by a third. So, in a sense, denying class becomes a form of flat-earthism.

Do you feel the riots have been a distraction or have they helped in modifying the discussion about class?

I found the riots troubling. This wasn’t by any stretch of the imagination some great, noble uprising of the oppressed. It’s important to remember the consequences of the riots were most sharply felt by poor or working class communities, many of whom, frankly, felt terrorized. But the important thing to understand is why it happened. When I’ve been on TV talking about this, I’ve been denounced quite savagely as an apologist for mindless violence, mindless thuggery and so on. But to understand isn’t to justify. The reality in Britain today is that one in five young people are out of work. That’s the highest it’s ever been. And in working class communities, it’s even higher. In Tottenham where the riots first started, there are 54 unemployed people chasing every single job vacancy. If you have so many people who feel they don’t have a future to risk, it only takes a very small proportion of them to bring chaos to the streets of Britain.

The riots are a dark foreshadow of much worse to come.

One of your points is that this word “chav” is not only disparaging, but it marks out a particular group of sub-working class people as not part of society at all. You write that what we are looking at is what Michael Young in his 1958 satirical essay The Rise of the Meritocracy called a “meritocracy.”

Young described it as a dystopian vision of a future in which the least able go to the bottom. But today, in our meritocratic society, the idea that your status is based on your ability is a political religion. I find that horrifying: It’s a form of social Darwinism. In a society like ours, with huge, unjust distributions of wealth and power, meritocracy becomes a rubber stamp for inequality, because what it says is that those at the top deserve to be there and those at the bottom also deserve to be there because they’re lazy, because they don’t work hard enough, because they’re feckless.

The perverse offshoot of meritocracy is the idea that people don’t improve their conditions collectively, but individually, by pulling themselves up by their bootstraps. We’ve got this idea that everyone is supposedly middle class apart from those who, because of their own personal, behavioral faults are where they are. And in Britain the caricature of this is “the chav,” which is another way of saying the remnant of the old working class who has become this sort of feckless, antisocial, bigoted rump.

How do you react to the suggestion that people are responsible for their position within the underclass because the working class is no longer organized, militant, solid, proud of itself and so on?

There’s a huge tradition in England, as in Wales and Scotland, of working class militancy. The Chartists in the 1830s and ’40s were probably the world’s first working class movement. But what has changed is that the old working class was based in industry. Communities were sustained by the dock, the mine, the factory. Jobs passed on from generation to generation, and were relatively secure. You all lived and worked together and that provided very natural, organic forms of solidarity. More than 7 million worked in manufacturing in 1979 and just over 2.5 million do now.

What I call the new working class is based in the service sector. There are 1 million call center workers, as many as there were miners at the peak of mining. And supermarkets are the second largest employer in the country now. You don’t have communities based around supermarkets and call centers. And that makes a far more atomized and fragmented working class.

Years ago when I was teaching at university, one of the papers we used to read was by A. Sivanandan, an old socialist who berated feminists, even anti-racists, for dislodging class as the central site for struggle. He was against what came to be called identity politics. To some extent I can’t help feeling that he had a point.

With identity politics, the American New Left in particular dismissed the old working class as no longer a viable vehicle for social change. One of the inspirations was C. Wright Mills, a sociologist who attacked what he called labor “fetishes.” Instead, the New Left looked for new groups to replace labor, which in the case of America were students, African Americans, the urban poor. They were often very antagonistic toward trade unions and that became reciprocated. An infamous example in America was the Hard Hat Riot in New York in 1970 where construction workers beat up antiwar students. Polls showed at the time that blue-collar workers hated the Vietnam War but they hated the antiwar movement even more.

In Britain in the ’80s class seemed to lose its saliency, but history was still blowing in the right direction with the rights of women, gay people, ethnic minorities. You could still be radical and throw yourself into the struggles. The problem was that class was taken out of the equation, and the Tories and their allies in the media were able to deny the existence of class.

If you don’t believe in a class-divided society, then you don’t challenge the people who have all the money and have all the power in the society. But if you talk about class, you accept that people have opposing interests, that there’s a struggle to be waged and that there’s a fight going on.

Look at the position of women. New Labour appropriated elements of radical feminism by attempting to redress the outrageously unjust lack of women in power by making sure women were elected to parliament. But those women were from very narrow professional backgrounds: Lawyers, people like that.

In terms of identity, it’s not to say it’s not relevant, it’s about how you integrate it. Because today the only black women you have in Parliament are cleaning toilets. And that is a damning indictment.

The Left isn’t the Left anymore if you don’t talk about class.

Do you think the Left is beginning to talk about class again?

The Left barely exists as a political force. It was caught up in a perfect storm. The rise of the New Right, the defeat of the labor movement and then the collapse of the Soviet Union–and not because the Left in any way looked at the Soviet Union as any sort of model but because it released a wave of capitalist triumphalism. It is the “end of history,” as Francis Fukuyama put it. We need to look to America and Wisconsin. The American labor movement is on its knees, but you saw a great struggle in Wisconsin, an inspirational struggle. And that is something the people in Britain need to look at and learn from.