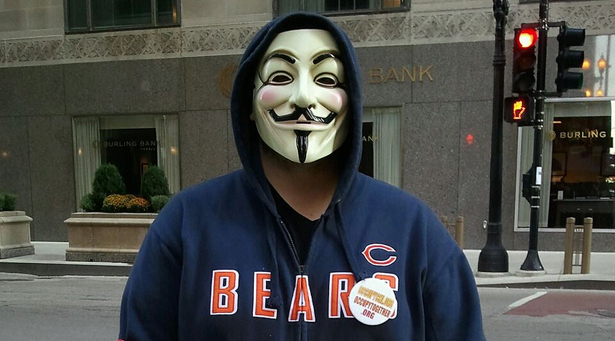 An Occupy Chicago participant at LaSalle and Jackson on October 2, 2011. His sign, which can be seen here, read "Do you feel helpless? Join us." (Photo by Megan Groves.)

Occupy Chicago: No Park, No Sleep, No Problem

Chicago’s answer to Occupy Wall Street doesn’t have a place to sleep, but is still growing.

“There’s a very real possibility that we will be out here while it’s snowing.”

The leaderless Occupy Chicago sit-in continues outside the Federal Reserve Bank at Lasalle and Jackson. Mid-way into its second full week, the peaceful protest spawned from the larger Occupy Wall Street in New York City has grown from less than five ‘occupiers’ at the September 24 start of the event to between 40-50 or more during daylight hours, with a dedicated few that remain overnight.

Occupy Chicago is evolving almost minute by minute. As of yet, the group has no specific goals, although the Occupy Chicago website states that they are “close to reaching a decision on adopting the four grievances from New York.”

Like Occupy Wall Street, the Chicago movement has grown not from one set of demands or one organization. Instead the people occupying Chicago’s financial district share a general, simmering anger over the way that corporate financial institutions derailed the U.S. economy only to be more than fully recovered a little more than two years later while unemployment continues to climb in Chicago, measured at 11.7% for August 2011.

Among the occupiers, Austin McClain is a 24 year-old who works at a treatment center. He has been with the group between shifts at work since Monday, September 26. “Most of the people who come here have jobs,” he said. “Mornings are very rough. Last week it was raining the entire time, and we’re out every single day. We say ‘Good morning’ and put on a happy face, but the majority of people are very straight forward, with a frown on their face. Got cursed at a couple times, got called hippies a few times.” By lunch, Austin says that drummers are out, people are having fun, and more people show up in support.

One of the largest challenges facing the fledgling group is that, unlike the group in New York, Occupy Chicago doesn’t have a place to sleep.

“The first couple of days, the Federal Reserve police told us that as long as we didn’t lean against the wall of the bank, we could sleep there,” said Micah, who volunteers as a press liaison for the group. “Then, they decided they owned the sidewalk up to six feet, and put up barricades to protect their sidewalk.” This created a bottleneck that put the group in conflict with a Chicago city ordinance preventing anyone from blocking a public way (including sleeping or refusing to move). “We decided, since you’re not going to let us sleep there, we’re going to just not sleep,” Micah said. As a result, the group keeps everything on the street light and mobile, using wheeled carts and backpacks. “Until 3 (A.M.) we have about 40 people.”

So now, protestors are working in shifts, staying awake as long as they can, and swapping out to sleep in cars parked nearby or just returning home to rest. So far, the group’s housing committee hasn’t had much luck. “There’s a very real possibility that we will be out here while it’s snowing,” said Michael, a member of the housing committee. “Police allow us to park cars overnight on the street without getting tickets, but during the day we have to move them.”

The occupiers have already been rained on for days at a time, and sat through overnight sessions covered in plastic sheets, with temperatures that are low enough to remind them of Chicago’s brutal winters. With the more stalwart members of the group insisting they plan to sit in either until the end of the year, or until they see some sign of progress, the question of how to house and support the growing group is of primary importance. “We do expect that if the weather stays nice we will keep growing, and if the weather turns inclement before we get a space to occupy we will lose some people,” said Micah. “There’s been a steady presence through the first eight days with off and on rain and cold temperatures,” he said.

Also different from the New York protests is that there have been no arrests made in Chicago, according to Alexandra, a legal committee member who liaisons with New York City members of Occupy Wall Street. “There have been no arrests and we intend to keep it that way. We don’t have a park here, we have a street,” she said, referring again to the lack of sanctuary for occupiers.

Occupy Chicago might not have a place to stay, but they’ve been flooded with support in the form of donations of food, water, personal hygiene items and even tech support for a new mobile Wi-Fi station that has allowed the group to stream video and update social media platforms from laptops since this weekend.

The group, like the one in New York, uses social media and cell phones to reach a wide constituency of supporters. The day the group was forced to relocate because of the Federal Reserve police complaint about blocking the sidewalk, the group voted to pull together the cash to rent a U-Haul. “By the time our General assembly meeting was over, someone called and said that a truck was on the way and would arrive in 20 minutes,” Micah said. “Not everyone can come down here and occupy, but everyone is affected by this, and everyone is fed up. Everyone can help.”

The “General Assembly” is a public forum that drives the makeup and direction of the loosely assembled but diverse group. These daily meetings echo Occupy Chicago’s New York progenitors, as does the method for deciding rules and reasons for the occupation. Voluntary participation comes with a lengthy set of hand gestures and procedures for speaking your mind or addressing the group.

“Human Microphones” are a way to ensure that everyone hears the speaker, no matter how far back in the crowd they may be. If a speaker chooses to address the crowd, the crowd will address them in return, repeating word-for-word what they say. It’s more of a problem in New York, where the protests can swell to 1,000 or more, forcing organizers to adopt a ‘second-wave’ of human microphones (That’s one speaker with two repeats). So far in Chicago, it’s unlikely that anyone has a hard time hearing, but the call-and-response style of discussion forces speakers to slow down and consider carefully what they say to the crowd.

To keep the discussion civil, participants use wiggling fingers in the air (called ‘spirit fingers’) to show approval, or what seem like pantomimed ‘peace guns’ to request to add a point to the discussion. If anyone in the crowd finds a subject to be off topic or inconsequential, they hold their hands together in the shape of a triangle, called the ‘point of process,’ but at the October 2 meeting, nobody was compelled to stop speaking, regardless of the crowd’s reaction.

If there’s a weakness to the Occupy Chicago movement, it’s that these meetings can be long and at times seem pointless, more a platform for individuals who are hungry for an audience then a catalyst for development. At the 3 P.M. general assembly, one of the speakers was recruiting for an anti-war protest next Saturday. The speaker after him discouraged anyone in the group from aligning themselves with any one particular cause.

Although the group skews young and Caucasian, there is a diversity of ages and ethnicities, particular at these public meetings. Two Latina women in their sixties, Christina and Dora, traveled from Oak Park where one is retired and the other teaches Spanish at two daycare centers there.

“I know the movement and I support them. I saw on the Internet what had happened in New York and other places,” Dora said. “I am very enthusiastic about this group. If they are very young, for them to understand what is happening in this country is important. It is their future.”

Next to them, a young mother, Chiara, sat against the concrete wall of the Bank of America building with her twin 12 year-old daughters, listening to the General Assembly meeting. They are Italian but have lived in the United States for the past 10 years. “I’ve been here [at Occupy Chicago] on and off for the past week,” she said. This was the first time she had brought her children with her. “They’re cold and they’re tired. I told them that it was like going to school, but different. In school you learn from books and lectures and worksheets, but it’s removed from what’s going on in society,” she said. “We should come down and learn about what’s going on in society right now in a different way than in the classroom.”

Those who attend the General Assembly may never spend more than a few hours ‘occupying’ the headquarters on LaSalle, and the same is true of those who join the various marches that have taken place to locations including Millenium Park. But while Occupy Chicago could clearly stand to gain from more numbers staying overnight, it is a movement that welcomes different levels of participation.

As Micah put it, “We don’t want to deter anyone from joining us. Our main agenda is that we oppose corporate abuse of the American political system.”

Update, October 4: An emergency General Assembly meeting was called for 10 A.M. today “Due to our ongoing issues with police and housing.” In These Times will post further updates, as and when we get them, to The ITT List.

Ryan Williams is a Columbia College journalism graduate working in Chicago nonprofits. He moonlights as a freelance photographer and writer.