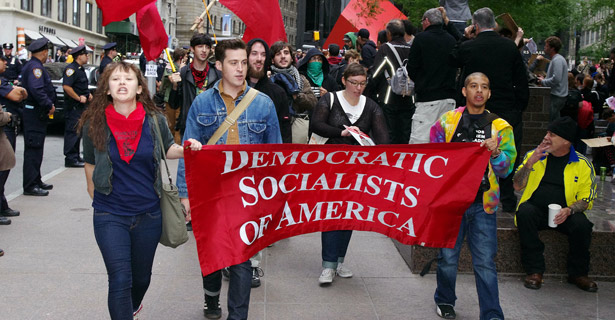 Democratic Socialists of America march on the first day of the Occupy Wall Street protests in New York City. DSA's membership has grown 60 percent since 2003. (Photo by David Shankbone)

After 30 years of failed neoliberalism, we need a real alternative.

“There’s class warfare, all right, but it’s my class, the rich class, that’s making war, and we’re winning.” With all the right-wing hoopla about how President Barack Obama is waging class war, you might be surprised to learn that Warren Buffet said these words in 2006. The billionaire investor was acknowledging 30 years of a widening income gap–but I’ll go a step further. I believe that unfettered capitalism is inherently undemocratic and that human action can significantly democratize our political system. That’s why I’m a socialist.

Corporate America’s assaults on working people–seeking profits through offshoring jobs, busting unions, paying politicians to slash corporate taxes and deregulating the banks–have ruined our economy. Meanwhile, millions of workers have been thrown from their jobs while unions are scapegoated for manufactured budget crises at the state and local levels.

The accident of birth should not determine the course of a person’s life. Government expenditures are an indication of a society’s priorities, and it is both economically and morally imperative to provide a safety net for those who suffer the most in a downturn. Without massive public investment in healthcare, education, infrastructure and green jobs–which could be funded by progressive taxation of income along with a tax on financial transactions–our future is bleak. With high unemployment and anemic demand, the economy will continue to limp forward. Those lucky enough to have work will likely remain afraid to agitate for better conditions.

Right now, we need more jobs and better pay for less work. In the long term, ordinary people need more power–through unions, worker councils and seats on the board in the workplace, and in politics, through a public campaign finance system that provides sufficient exposure to all candidates. We need a political economy that allows everyone space and time for personal growth and thoughtful participation in the decisions that profoundly impact their lives.

I feel so strongly about these values that I recently quit my job as an organizer for SEIU to become the national director of the Democratic Socialists of America (DSA), which has its roots in both the Socialist Party of Eugene Debs, Norman Thomas and Michael Harrington and the New American Movement, a nonsectarian organization that grew out of the American New Left and whose founders were instrumental in establishing In These Times back in 1976.

DSA’s strategy is to push American politics to the left by strengthening social movements such as Occupy Wall Street. Movements are the only force capable of making elites respond to popular demands. That doesn’t mean we ignore elections. Among other races, the organization is looking forward to helping socialist Sen. Bernie Sanders (I-Vt.) win re-election.

I was raised in a union family that directly benefited from the kind of government programs that DSA fights to protect and expand–like the GI Bill. As a bi-racial woman, I experienced oppression and learned that the world isn’t fair, despite what I was taught in school about the American Dream. When I attended a DSA youth section event at the University of Chicago, I realized that the patterns I had seen all my life signal structural problems. Capitalism, patriarchy, white supremacy–they are linked structures of oppression that must be dismantled.

Analyzing these structures is critical to forging a political strategy to challenge corporate power. But doing so is not the only reason I decided to become DSA’s national director. Some may argue that I should work in a more mainstream organization and “get more done,” but without a clear alternative to the Tea Party narrative, national politics will continue to slide to the right. In the current climate, even the most moderate reforms are red-baited. We need a strong socialist organization in the United States to counter Republicans’ (and often Democrats’) dangerous buffoonery.

As 30 years of neoliberal economic destruction come home to roost, more and more people are beginning to question the wisdom of capitalism and becoming open to socialism–DSA’s membership has grown 60 percent since 2003. I believe that someday soon American politicians will stop fearing the s-word, and start enacting systemic change.

Maria Svart, who joined the Democratic Socialists of America in 2004 as an undergrad at the University of Chicago, is now the group's national director.