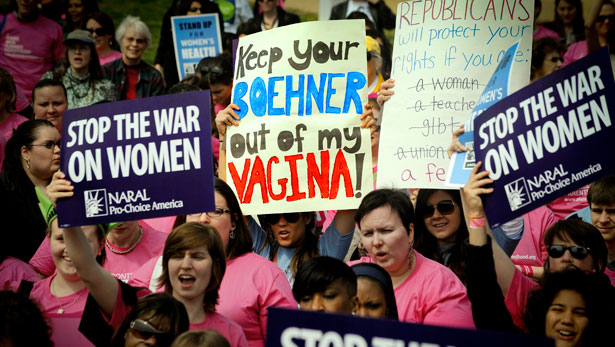 Activists attend the Stand Up for Women's Health Rally at the National Mall in Washington, D.C., on April 7, 2011. (Jewel Samad/AFP/Getty Images)

AUL’s model legislation insists: “Minors who obtain ‘secret’ abortions often do so at the behest of the older men who impregnated them, and then return to abusive situations.”

WHEREAS, any given person might, through no fault of her own, find herself in possession of a uterus, and

WHEREAS, this uterus, being located within one’s body, fits the commonly used definition of an “internal organ,” and also the definition of “personal property,” and

IT SEEMS CLEAR that every rational adult in America should regard anti-abortion advocates with the same level of respect they have for people who think it’s not technically stealing if they only borrow your car, without permission, for the next nine months, or people whose ethics mandate knocking you out in a hotel bathtub and stealing one of your kidneys.

HOWEVER, this is not the case. Which is why this reporter has had the chance to peruse several pieces of “model legislation” drafted by Americans United for Life (AUL), all of which are aimed at making abortion impossible or near-impossible at the state level, and many of which are written in a format that looks

LIKE THIS, which is annoying, because although they attempt to look very official and reasonable by so doing, they are actually written by people who would like to potentially

USE THIS REPORTER’S UTERUS without her permission.

All right. Let’s drop the conceit, shall we? The model legislation in hand consists of six pieces: the “Abortion Patients’ Enhanced Safety Act,” the “Abortion-Inducing Drugs Safety Act,” the “Planned Parenthood Joint Resolution,” the “Abortion Subsidy Prohibition Act,” the “Personhood Preamble,” and, the most repugnant of all in practice, the “Parental Involvement Enhancement Act.” In December, AUL shared its legislation with lawmakers at the American Legislative Exchange Council’s three-day policy retreat. When taken as a whole, they present a surprisingly comprehensive plan for banning abortion at the state level in 2012.

Drafting model legislation is not an uncommon practice for the AUL: The organization has had substantial success in getting lawmakers to introduce its model legislation. As Nick Baumann of Mother Jones reported last year, AUL’s “Pregnant Woman’s Protection Act,” which apparently extended the definitions of “justifiable homicide” so that a pregnant woman could claim self-defense for killing anyone who presented a threat to her fetus, was responsible for Nebraska’s LB 232, which did the same.

Most of its new model legislation is not surprising; the “Planned Parenthood Joint Resolution” aims to defund Planned Parenthood, which six states did in 2011. “Fetal personhood” measures, such as the one proposed in Mississippi, have already drawn a great deal of coverage this year for their remarkably radical implications – aside from effectively banning abortion in the state, they also stand to ban hormonal contraception and emergency contraception, and could open miscarriages to criminal investigation. Although they have been unsuccessful, opponents of the right to choose have not surprisingly kept this option on the table.

Several of the other bills are aimed at shutting down abortion providers by requiring them to take on unnecessary costs or meet unreasonable standards: The “Abortion Patients’ Enhanced Safety Act” would require any facility that provides five or more first-trimester abortions per month, or any second- or third-trimester abortions, to be licensed as “ambulatory surgical clinics.” This would require them to invest in getting such a license annually, and potentially sink money into providing unnecessary services and clinic features. This is not new, either, which is why we know about the unnecessary features: In Kansas, where a similar law was passed, the state regulations for ambulatory surgical centers included investing in rooms far larger than those required for the procedures being offered, installing separate dressing rooms, and putting in extra toilets, presumably so that the abortion providers would be better able to flush money down them. Meanwhile, the “Abortion Inducing Drugs Safety Act” expresses shock that all doctors are not mandating extensive physical exams and multiple supervised appointments for patients when prescribing abortifacients.

The most alarming of these acts is the “Abortion Subsidy Prohibition Act,” which would (among other things) ban public entities from leasing a building to an abortion provider, ban public schools from providing abortion information or emergency contraception, and ensure that “monies paid by students as a form of tuition or fees to a state university or a community college shall [not] be used in any way for, to assist in, or to provide facilities for an abortion, or for training to perform an abortion,” potentially meaning that state medical schools would not be allowed to teach the procedure, thus restricting access to abortion by attempting to ensure that there simply are no qualified doctors to provide it.

If this all seems a bit totalitarian, bad news: No agency that receives state funding to provide legal services may provide those services “with respect to any proceeding or litigation which seeks to procure any abortion, or to procure public funding for any abortion.” Nor may they “advocate for a ‘right’ to abortion.” Yes, you read that right: The word “right” is put in scare quotes.

‘… the death of her unborn child.’

However, nothing matches the sheer gall of the “Parental Involvement Enhancement Act,” which starts off feigning concern for sexually abused children, insisting without any apparent evidence that “minors who obtain ‘secret’ abortions often do so at the behest of the older men who impregnated them, and then return to abusive situations.” It not only requires that the minor in question notify her parents and get consent for the abortion – which is not at all uncommon currently – it also requires that both the parent and the minor sign a form indicating that they “understand” that the procedure will, and I quote, “result in the death of her unborn child.” And then they must pay to have the form notarized. It applies these same restrictions to disabled people with legal guardians.

Those seeking a judicial bypass must either prove in court that they have been physically or sexually abused by their parent or guardian, or undergo an evaluation in which the court may consider “what steps the pregnant woman took to assess her options and the extent to which she considered and weighed the potential consequences of each option,” and “the pregnant woman’s conduct since learning of her pregnancy.” Put simply: The court can deny you a judicial bypass because it doesn’t like you.

Again: Much of this is not new. But taken together, these measures provide a comprehensive game plan: First, penalize doctors and facilities for providing abortion and other reproductive health services, in the hopes of shutting them down. Next, restrict the education of future doctors so that the medical procedure itself will not be available. Whenever possible, strip personal autonomy from pregnant people and assault their ability to choose. To eliminate any resistance to this assault, defund advocates for reproductive health or justice, and penalize the act of “advocating for a ‘right’ to abortion.” And, at the end of the road, ban abortion and contraception at the state level.

Therefore it is resolved

WHEREAS, any given person might, through no fault of her own, find herself in possession of a uterus, and

THIS PROPOSED LEGISLATION aims to penalize the act of having a uterus, and to deprive necessary healthcare and personhood to those who possess them,

THIS PLAN cannot, under any circumstances, be tolerated.