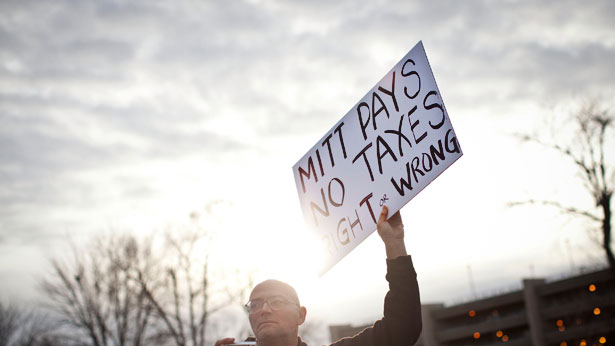 A member of the Occupy movement demonstrates outside the Iowa Democratic Party Headquarters on Dc. 29, 2011, in Des Moines, Iowa. (Andrew Burton/Getty Images)

How we the people can fight back against plans to cut the social safety net.

The oft-heard claim that Republicans are fiscal conservatives is nonsense that is utterly inconsistent with the historical record.

When the economic and financial crisis erupted in 2008, progressives hoped that it would trigger a popular revulsion against the right-wing economic policies that caused the crisis. It is now clear that these expectations are not being met. Moderate progressive policy moves have been overwhelmed

by public-sector layoffs and budget cuts as Republicans, too many Democrats and even President Barack Obama himself, have chosen austerity or “belt-tightening” as a main policy objective.

But how did the dogma of these “Austerians” – inspired by the Austrian School of economics – come to dominate public policy?

Progressives were not the only ones hoping to seize the opportunity of the economic crisis. A right-wing coalition of ideologues and industrialists saw it as a chance to achieve final victory in the war they have waged since the 1930s to destroy the New Deal institutions built under President Franklin Delano Roosevelt and extended through the late 1970s.

Those of us who believe in an economy designed to meet the needs of the majority can still win the war that the Austerians are waging against us. Our commitment to those who are suffering the most during the Great Recession does not need to be sacrificed on the altar of a balanced budget achieved not by taxing corporations and the very rich but by savagely cutting the social safety net. The Left’s vision of a government that serves human needs is entirely compatible with moderate sustainable deficits and a shrinking public debt burden.

How is it that a right-wing coalition is closer to destroying social democracy in America than at any time since its emergence in the 1930s? Because the Right succeeded in creating a dominant media narrative that blames deficits on an American public that demands more government social spending than it’s willing to pay for. In fact, deficit problems were actually created by the Right’s neoliberal economic model imposed on the country after 1980, which involved the radical deregulation of the financial market, regressive tax cuts, rising inequality and unfunded war spending.

To fully understand how we got to this point, we have to go back to the 1920s. This historical context makes the solutions to today’s deficit “crisis,” offered below, even more obvious and compelling.

The boom of the second half of the 1920s was marked by little regulation of business, very low taxes on corporations and rich households, a crippled union movement, a powerful financial sector that rained money on the wealthy, and a political system dominated by economic elites. From 1923 to 1929, 70 percent of the growth in income went to the richest 1 percent and only 15 percent went to the bottom 90 percent of the income distribution. This was the Right’s dream world.

The out-of-control capitalism of the period led to a financial crisis in late 1929. The ensuing financial collapse was accompanied by a severe depression.

The terrible economic costs of the Great Depression led to powerful political movements in the United States and Europe that demanded both an end to uncontrolled capitalism and its replacement with a new system designed to meet the needs of the people. The Western economic models that evolved from these movements are variants of social democracy, democratic capitalism, regulated capitalism or the mixed economy.

In 1933, Roosevelt and the Democratic Party took control of the government and began to implement a series of social-democratic programs that became known as the New Deal.

U.S. elites were split on whether to accommodate some aspects of the New Deal in the early 1930s, but the strength of the Right’s resistance increased in the late 1930s as the danger of mass rebellion against capitalism ebbed. The right-wing coalition tried to undermine all aspects of the New Deal, including:

• the regulation of industry

• the reduction of economic inequality

• the commitment to full employment, which weakened business control over labor

• the diminution of elite control over the government.

In other words the Right wanted to restore the 1920s regime.

Much of the opposition to the New Deal was based on economic self-interest, but ideological forces were at play as well. Kim Phillips-Fein in Invisible Hands: The Businessmen’s Crusade Against the New Deal writes that, motivated by a deep-seated “antipathy toward social democracy,” the Right:

elieved that at the heart of the New Deal and the labor movement was an excess of democracy – that the organization of working-class people into labor unions led to the rise of the welfare state and the perversion of the market economy. … For them, the turning back of the New Deal was a question not only of the bottom line but of the deepest social principles.

The problem for the right-wing coalition was that the ever-expanding role of government in the economy was extremely popular because it created widespread prosperity from WWII through the mid-1970s – the so-called “Golden Age” of modern capitalism. The rate of economic growth was high, unemployment was low, real wages and family incomes rose rapidly, and inequality plummeted. Much of the business sector distanced itself from coalition efforts to overthrow the New Deal in the 1950s and 1960s because profits were so high.

The mid- to late-1970s marked a turning point. In the wake of the first oil price hike in 1973, the U.S. government was faced with two choices: It could stimulate spending to sustain growth at the expense of higher inflation, or it could restrict spending to stop inflation at the expense of higher unemployment and slower growth. It chose the latter course, which caused the unemployment rate to rise from 4.9 percent in 1973 to 8.5 percent in 1975. Slower growth, higher inflation and unemployment, and falling profits and stock prices created growing discontent with the economic status quo. Meanwhile, social unrest was stirred by conflict over racial integration, the anti-war movement, the women’s movement, pro-choice struggles, the so-called culture wars, student radicalism and a youth rebellion.

These developments led to a political alliance between resurgent right-wing economic forces and the rapidly increasing ranks of cultural conservatives. As a result, business and other conservative forces saw a dramatic increase in their ability to raise money to elect friendly politicians, organize grassroots pressure on all politicians, and spend money on an expanding right-wing ideological infrastructure of think tanks and university influence. They also used their control of the media to interpret economic and political events for the public through a conservative prism.

By 1980, the country had come to a crossroads. The existing set of government institutions and policies, in combination with changes in economic conditions – including the increasing globalization of production and investment that led to rising foreign competition – were no longer generating the widespread prosperity the public had come to expect. Either we had to reconstruct and reinvigorate our social democratic model or replace it. Right-wing forces, which had vastly increased their political clout, had a clear vision of the alternative model they wanted – a modern version of the 1920s economy situated in a globalized economic system.

For their part, supporters of the basic New Deal philosophy were confused about how to restructure the government-economy nexus in the face of economic adversity. In addition, a large and growing percentage of Democrats had lost their commitment to the New Deal.

Progressive economists did offer various policy proposals that, in the spirit of the New Deal, were designed to support egalitarian growth. For example, a combination of stronger unions, a rising minimum wage, tougher regulation of financial markets and a more progressive tax policy could have sustained the relatively low economic inequality of the Golden Age.

But right-wing forces were now dominant.

So under President Ronald Reagan, the Right delivered a rapid rise in inequality through financial market deregulation, high unemployment, regressive tax cuts and attacks on unions. Increased capital mobility in a globalized economy also facilitated a “race to the bottom,” in which transnational firms threatened to invest only in those countries with the lower wages and corporate taxes, and with the least effective regulatory regimes. Since Reagan not only enacted large regressive tax cuts but also increased defense spending by about 1.5 percent of GDP, he created by far the largest federal budget deficits since the end of World War II. Both the tax cuts and slow economic growth under the new right-wing economic policies helped create the rise in deficits and debt that took place after 1980.

The economy grew much faster than government debt during the early post-war decades – so the debt-to-GDP ratio became smaller over time. The ratio was at a post-war low of 26 percent in the year before Reagan became president. In other words, there was no deficit or debt problem before the Reagan presidency.

The oft-heard claim that Republicans are fiscal conservatives is nonsense that is utterly inconsistent with the historical record.

In the first year of President Obama’s term, the debt-to-GDP ratio hit 53.5 percent. In 2010 it was just over 62 percent. The deficit was projected to hit 75.1 percent in 2012, in part due to the two-year extension of the Bush tax cuts agreed to by President Obama and congressional Republicans in 2010 at an estimated two-year revenue loss of $850 billion.

Rapidly rising deficits at the federal, state and local levels, along with prospective long-term financing problems in the Social Security and Medicare programs, intensified the ongoing one-sided class war waged by the right-wing coalition against the rest of us. As billionaire Warren Buffet famously remarked in 2006, “There’s class warfare, all right, but it’s my class, the rich class, that’s making war, and we’re winning.”

Because of these deficits the right-wing coalition of rich households, large corporations, smaller businesses, ideological conservatives (such as the Religious Right and, more recently, the Tea Party) and conservative politicians is demanding severe cuts in spending that supports the poor and the middle class, or that funds public investment in education, healthcare, infrastructure and technology.

At the same time, this coalition has demanded tax cuts (for the wealthy and corporations) that are larger than the proposed spending cuts, which would increase government deficits and thereby sustain political and economic pressure to further decimate government spending – what the Right publicly refers to as its “starve the beast” strategy.

The Republican Party, with the assistance of a significant number of Democratic politicians, supports core post-Reagan policies of unrelenting regressive tax cuts, major reductions in nondefense government spending and serious cutbacks to – or privatization of – Social Security and Medicare.

The adoption of new austerity programs across the globe, particularly in Europe, threatens to sink economies deeper into recession, perhaps triggering another global financial crisis. Deep cuts in government spending will reduce the income of public-sector workers and private-sector employees who work under government contract, as well as the income of families who receive payments from Social Security and other social programs. This means reduced purchasing power, less production and more unemployment. Here in the United States we need a serious jobs-creation program over the next several years, but it cannot be built on the deep cuts in public spending and regressive tax cuts demanded by the right-wing coalition.

James Crotty teaches economics at the University of Massachusetts, Amherst, and is a research associate at the Political Economy Research Institute.