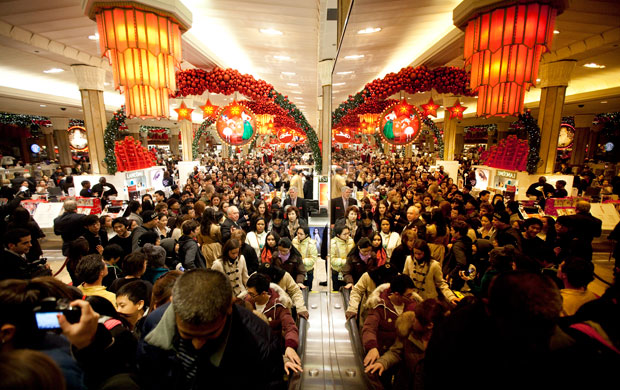 Even in a time of financial crisis, our culture consumes as if there were no tomorrow.

In 1977, two Boeing 747s collided on an airstrip in the Canary Islands. According to accident investigators, those who survived the initial blast in one plane had time to escape before a fire consumed the wreckage. But eyewitnesses reported that many remained in their seat looking perfectly content–as if nothing was wrong.

Not surprisingly, dozens of these dazed victims were burned to death, and the episode became a reminder of the so-called normalcy bias–a cognitive phenomenon whereby many who are faced with imminent disaster instantly convince themselves that everything is normal and that they don’t have to modify their behavior.

Unpleasant as this anecdote is to recount, it exemplifies the psychology at the root of one of America’s most destructive traits: our obsession with materialism and consumerism. To extrapolate the metaphor, if our damaged economy, record-low savings rate and sky-high personal debt levels are that smoldering plane about to explode, then America’s “shop till you drop” normalcy bias may be engineering yet another avoidable tragedy.

A glance at new data from the holiday season tells this story. After Black Friday’s now-annual melee of hyper-aggressive shoppers, the Washington Post reported that Christmas saw credit card purchases jump 7 percent over last year. Meanwhile, the Federal Reserve bank reported that consumer borrowing surged to pre-recession levels; Forbes reported that online holiday spending hit a record; and the Los Angeles Times reported that “consumer spending “grew faster than people’s take-home incomes” as households “cut their savings rate (to) support their purchases of cars and other goods and services.”

In the face of such self-destructive behavior, it’s worth asking: Why is overconsumption still the preferred “normal” in America? The flippant answer is that it’s simply hard for shopaholics to break old habits. But while that’s certainly true, it’s not the whole story when enablers are everywhere.

Turn on the television, and you’ll inevitably face a bevy of ads telling you to buy something – a cellphone, a television, a car, anything!–even if you don’t actually need the product. Look around at the economy and you’ll see growing industries that are based not on fulfilling customers’ basic needs, but on satiating consumers’ materialist impulses. Tune into politics and you’ll hear policies touted for how they will prompt even more consumer spending.

Of course, that latter enabler–politics–is the most powerful of all, as our national leaders regularly tout consumption for its own sake.

Recall that in the face of the planet’s climate change and resource crises, then-Vice President Dick Cheney denigrated the notion of frugality, saying, “Conservation may be a sign of personal virtue, but it is not a sufficient basis for a sound, comprehensive energy policy.” Likewise, Rudy “America’s Mayor” Giuliani told everyone not to sacrifice after 9/11 but instead to “go shopping.” And last month, Bloomberg News headlined a dispatch “Bernanke Prods Savers to Become Consumers,” highlighting how the “easy money” lending policies of the nation’s chief banker was reinvigorating the culture of gluttony.

Just five years ago, this same Fed chairman was rightly imploring Americans to “forgo consumption or leisure” in order to start reshaping our economy around sustainability and thrift. But after the financial crisis, he, like so many politicians, became just another passenger on that burning plane.

Paralyzed by the normalcy bias, Bernanke and other leaders keep calmly imploring us to go about our business … move along … and that’s what we keep doing, even though the fuselage may soon go up in flames.