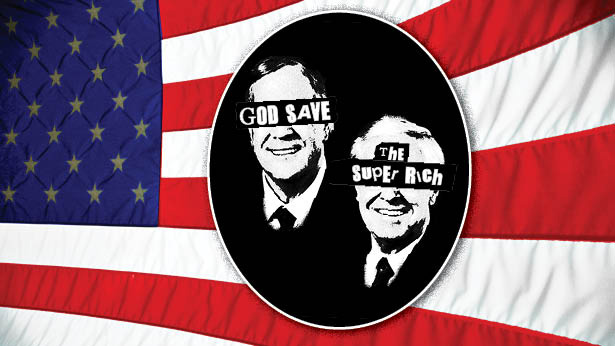 Oligarchy in the U.S.A.

The wealth defense industry protects the richest of the rich.

Oligarchic theory requires no conspiracies or backroom deals. It is the minions oligarchs hire who provide structure to America's civil oligarchy.

Who are the oligarchs?

How much wealth does it take to make someone an oligarch in the United States?

Not just any rich person is an oligarch. Oligarchs are those rich enough to buy the professional firepower of the WDI to defend their wealth. Pulitzer Prize-winning economics reporter David Cay Johnston says that "this can sometimes be an outlay of $10 million to avoid $30 million in taxes, and other times spending only $1 million to save the same amount."

For some perspective, look at the income chart above, which breaks down the extent of material inequality in the United States. Pay special attention to the last column, the Material Power Index (MPI), which defines each income level as a multiple of the average income among the bottom 90 percent of American taxpayers.

Even at more than 30 times the average income of the bottom 90 percent of Americans, an average annual income of $1 million for those in the top one-half of one percent is still too modest to make them oligarchs. These citizens are certainly rich. But they don't have enough material power to hire anything beyond the cheapest foot soldiers of the WDI.

Starting with the next threshold, however -- the top one-tenth of 1 percent of incomes -- the MPI suddenly quadruples from 32 to 124, and then leaps another six-fold to 819 for those with incomes in the top one-one-hundredth of one percent. In 2007, about 150,000 Americans had average annual incomes of $4 million and above. This is the threshold at which oligarchs begin to dominate the landscape.

In 2005, Citigroup offered its high net-worth clients in the United States a concise statement of the threats they and their money faced.

The report told them they were the leaders of a “plutonomy,” an economy driven by the spending of its ultra-rich citizens. “At the heart of plutonomy is income inequality,” which is made possible by “capitalist-friendly governments and tax regimes.”

The danger, according to Citigroup’s analysts, is that “personal taxation rates could rise – dividends, capital gains, and inheritance taxes would hurt the plutonomy.”

But the ultra-rich already knew that. In fact, even as America’s income distribution has skewed to favor the upper classes, the very richest have successfully managed to reduce their overall tax burden. Look no further than Republican presidential contender Mitt Romney, who in 2010 paid 13.9 percent of his $21.6 million income in taxes that year, the same tax rate as an individual who earned a mere $8,500 to $34,500.

How is that possible? How can a country make so much progress toward equality on other fronts – race, gender, sexual orientation and disability – but run the opposite way in its policy on taxing the rich?

In 2004, the American Political Science Association (APSA) tried to answer that very question. The explanation they came up with viewed the problem as a classic case of democratic participation: While the poor have overwhelming numbers, the wealthy have higher rates of political participation, more advanced skills and greater access to resources and information. In short, APSA said, the wealthy use their social capital to offset their minority status at the ballot box.

But this explanation has one major flaw. Regardless of the Occupy movement’s rhetoric, most of the growth in the wealth gap has actually gone to a tiny sliver of the 1% – one-tenth of it, or even one-one-hundredth.

Even more shockingly, that 1 percent of the 1% has shifted its tax burden not to the middle class or poor, but to rich households in the 85th to 99th percentile range. In 2007, the effective income tax rate for the richest 400 Americans was below 17 percent, while the “mass affluent” 1% paid nearly 24 percent. Disparities in Social Security taxes were even greater, with the merely rich paying 12.4 percent of their income, while the super-rich paid only one-one-thousandth of a percent.

It’s one thing for the poor to lose the democratic participation game, but APSA has no explanation for why the majority of the upper class – which has no shortage of government-influencing social capital – should fall so far behind the very top earners. (Of course, relative to middle- and lower-class earners, they’ve done just fine.)

For a better explanation, we need to look more closely at the relationship between wealth and political power. I propose an updated theory of “oligarchy,” the same lens developed by Plato and Aristotle when they studied the same problem in their own times.

First, let’s review what we think we know about power in America.

We begin with a theory of “democratic pluralism,” which posits that democracy is basically a tug-of-war with different interest groups trying to pull government policy toward an outcome. In this framework, the rich are just one group among many competing “special interests.”

Of course, it’s hard not to notice that some groups can tug better than others. So in the 1950s, social scientists, like C. Wright Mills, author of The Power Elite, developed another theory of “elites” – those who wield more pull thanks to factors like education, social networks and ethnicity. In this view, wealth is just one of many factors that might help someone become the leader of a major business or gain a government position, thereby joining the elite.

But neither theory explains how the super-rich are turning public policy to their benefit even at the expense of the moderately rich. The mass affluent vastly outnumber the super-rich, and the super-rich aren’t necessarily better-educated, more skilled or more able to participate in politics; nor do the super-rich dominate the top posts of American government – our representatives tend to be among the slightly lower rungs of the upper class who are losing the tax battle.

Also, neither theory takes into account the unique power that comes with enormous wealth – the kind found in that one-tenth of the 1%. Whether or not the super-rich hold any official position in business or government, they remain powerful.

Only when we separate wealth from all other kinds of power can we begin to understand why our tax system looks the way it does – and, by extension, how the top one-tenth of 1% of the income distribution has distorted American democracy.

Enormous wealth is the heart of oligarchy.

So what’s an oligarchy?

Across all political spectrums, oligarchs are people (never corporations or other organizations) who command massive concentrations of material resources (that is, wealth) that can be deployed to defend or enhance their own property and interests, even if they don’t own those resources personally. Without this massive concentration of wealth, there are no oligarchs.

In any society, of course, an extremely unequal wealth distribution provokes conflict. Oligarchy is the politics of the defense of this wealth, propagated by the richest members of society.

Wealth defense can take many forms. In ancient Greece and Rome, the wealthiest citizens cooperated to run institutionalized states that defended their property rights. In Suharto’s Indonesia, a single oligarch led a despotic regime that mostly used state power to support other oligarchs. In medieval Europe, the rich built castles and raised private armies to defend themselves against each other and deter peasants tempted by their masters’ vaults. In all of these cases oligarchs are directly engaged in rule. They literally embody the law and play an active role in coercion as part of their wealth defense strategy.

Contemporary America (along with other capitalist states) instead houses a kind of “civil oligarchy.” The big difference is that property rights are now guaranteed by the impersonal laws of an armed state. Even oligarchs, who can be disarmed for the first time in history and no longer need to rule directly, must submit to the rule of law for this modern “civil” arrangement to work. When oligarchs do enter government, it is more for vanity than to rule as or for oligarchs. Good examples are New York City Mayor Michael Bloomberg, former presidential candidate Ross Perot and former Massachusetts Governor Mitt Romney.

Another feature of American oligarchy is that it allows oligarchs to hire skilled professionals, middle- and upper-class worker bees, to labor year-round as salaried, full-time political advocates and defenders of the oligarchy. Unlike those backing ordinary politicians, the oligarchs’ professional forces require no ideological invigoration to keep going. In other words, they function as a very well-paid mercenary army.

Whatever views and interests may divide the very rich, they are united in being materially focused and materially empowered. The social and political tensions associated with extreme wealth bond oligarchs together even if they never meet, and sets in motion the complex dynamics of wealth defense. Oligarchs do overlap with each other in certain social circles that theorists of the elite worked hard to map. But such networks are not vital to their power and effectiveness. Oligarchic theory requires no conspiracies or backroom deals. It is the minions oligarchs hire who provide structure and continuity to America’s civil oligarchy.

Jeffrey A. Winters is an associate professor of political science at Northwestern University. For a more extensive explanation of his theory of oligarchy, read Oligarchy (Cambridge University Press, 2011).