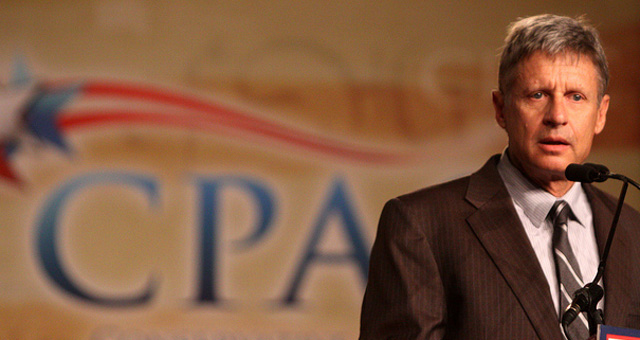 Why Gary Johnson Should Terrify the Democrats

The Libertarian’s presidential candidacy poses a problem for Barack Obama.

In a normal election cycle, the paradox that plagues every Libertarian candidate--too right-leaning for the left and too left-leaning for the right--would doom Johnson. But there's a wild card this year that could make things interesting: Americans Elect.

Do you value the independent journalism you find at In These Times? Please donate today to help us continue publishing articles like this.

Gary Johnson is, in some important ways, the candidate that the Left once hoped Barack Obama would be. He vocally opposes the death penalty, the use of torture by the U.S. military, and the indefinite detention of people charged with a crime–even suspects charged with terrorism.

He’s pro-choice. He calls for deep cuts in the defense budget and an immediate withdrawal of U.S. troops from Afghanistan and from many of our military bases around the world. He unequivocally supports marriage rights for gays and believes that legalizing marijuana–rather than building a wall–is the key to solving illegal immigration. He also favors a two-year grace period for immigrants who are in the U.S. illegally, so that they can obtain work visas and continue living and working here.

Johnson is a former two-term governor of New Mexico. He’s also a Republican–or was, until recently. He dropped out of the GOP presidential primaries in December and is mounting a campaign to become the Libertarian Party’s candidate this fall. The nominating convention will be held in May.

What’s striking about Johnson isn’t just the fact that he’s to the left of Obama and most other elected Democrats on many issues. It’s also his boldness in comparison with the Democrats’ timidity. He’s been a fierce critic, for example, of the warmongering and civil-liberties abuses by both major parties over the past decade. In January, when he spoke the ACLU’s National Staff Conference, he called for repeal of the Patriot Act.

“Ten years ago,” he said, “we learned that the fastest way to pass a bad law is to call it the ‘Patriot Act’ and force Congress to vote on it in the immediate wake of a horrible attack on the United States. The irony is that there is really very little about the Patriot Act that is patriotic. Instead, it has turned out to be yet another tool the government is using to erode privacy, individual freedom and the Constitution itself.”

Of course, most of Johnson’s other positions on domestic policy are outrageous to progressives. He wants an end to stimulus spending on “transportation, energy, housing, and all other special interests.” He’s no friend of organized labor (he supports so-called “right to work” laws) and favors relaxing child labor laws. He calls for abolishing the IRS, along with business taxes. He believes that the Affordable Care Act (i.e., “Obamacare”) should be repealed, and that the federal government should play no role in public education.

In a normal election cycle, the paradox that plagues every Libertarian candidate–too right-leaning for the left and too left-leaning for the right–would doom Johnson to being just a footnote. That’s still the most likely the outcome of his presidential bid. But there is a wild card this year that could make things interesting: Americans Elect.

Americans Elect, which bills itself as the “first national online primary,” is a nominating process, not a third party. But it opens up the best possibility of a serious challenge to the two major parties since Ross Perot’s campaign two decades ago. This spring, the Internet-based organization will conduct a series of votes to determine its field of candidates. In June, it will hold an online convention, and the winner of that vote will become a candidate for the presidency. Americans Elect believes that its nominee will appear on the ballot in every state.

(It’s worth noting that Americans Elect has been challenged as a secretive astroturf organization backed by billionaires with “some serious hedge-fund money.” Critics are raising questions about that money, and the fact that the bipartisan ticket—containing one person from the Democratic and Republican parties, or a major-party candidate and an independent—that will emerge from the online voting process must be approved by a committee appointed by Americans Elect’s board members.)

Ron Paul is attracting the most support among AE’s “delegates,” and in theory the organization is perfectly suited to his campaign. But Paul has said that he won’t run as an outside challenger if his bid for the Republican nomination fails. This is where things get interesting.

Johnson is the logical inheritor of the enthusiasm that Paul has generated, and he has much less baggage than Paul. There are no racist newsletters in his past; his foreign policy is less rigid than Paul’s but still solidly noninterventionist; and he doesn’t come across like a crank.

AE voters have taken notice. Johnson is among their top 10 choices so far, and he’s one of only two or three plausible candidates. The others are either already well known and engaged in major-party campaigns (Mitt Romney and Barack Obama) or else have no intention of running for the presidency (Bernie Sanders and Al Franken).

So there might be a plausible route for Johnson to make a serious contribution in this year’s presidential election. Even with AE’s backing, his odds of winning the general election would be slim. A candidate with a platform that appeals to deeply held convictions on both the left and the right, though, could shape the debate and possibly affect the outcome of the election.

The conventional wisdom is that a challenge by a strong Libertarian candidate would hurt the Republican more than the Democrat. But that seems unlikely. Democrats are usually critiqued from the right and pulled toward the center. The pressure coming from the GOP is always in the direction of more defense spending, a more hawkish foreign policy and fewer civil liberties. But what if Democrats are seriously challenged from the left on social and foreign policy–by a self-styled conservative?

The danger for Democrats isn’t that Johnson will win a significant percentage of the Left’s vote. The danger is that he’ll peel away a sizable share of the much-prized independent voters, who tend to be fiscal conservatives and social liberals, and who might feel, understandably, that Obama hasn’t played it straight with them. He backed away from his early-career support for gay marriage rights, for example, and endorsed civil unions when he became president. His position is now reported to be “evolving.” Does anyone know where it has evolved to, or when he might come to a definite conclusion? Or where he’s at on immigration reform? Or on the drug war?

There’s no uncertainty about where Gary Johnson stands on those issues. On every one of them, his position is both clear and deeply offensive to the GOP base, which is why he never had a chance of winning the Party’s nomination and has very little chance of winning the presidency. But it’s exactly why he appeals to independents.

By having the courage of his convictions, Johnson exposes both the GOP’s fraudulence on civil liberties and the Democrats’ perpetual timidity and hedging. Ironically, it’s by being extreme–by rejecting the pressures that keep serious presidential contenders from saying anything too blunt or honest–that Johnson can appeal to the center.

Uncomfortable truths are, after all, the last things we expect to hear from the man who wants to be our president. When it happens, it’s oddly inspiring. Democrats should be very worried.

This article was updated on February 24 to detail Americans Elect’s funders and nominating process, and note Johnson’s labor positions.