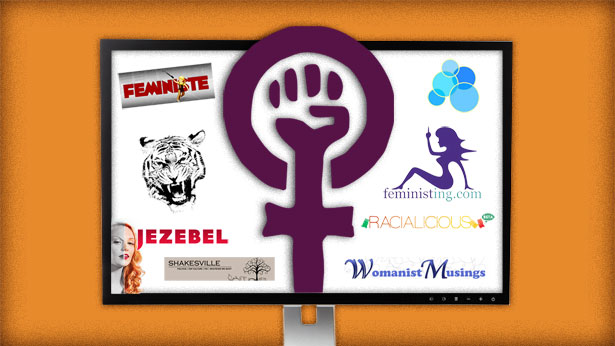 How feminist blogs saved my life.

A movement can hardly encourage women to reach their untapped potential if it doesn't recognize and value potential that has been, you know, untapped.

Feminist blogs saved my life. They gave me a community when I felt alone. They gave me hope, provided me with a free education and raised my expectations for myself. They helped me overcome a writer’s block that had lasted since college. They radically changed my conception of writing. And then I started one, thereby shooting myself in the foot as a writer. Feminist blogs, many people will allow, are inspirational. They may even be somewhat educational. But they are not, absolutely not, real writing, apparently.

Turner’s essay, titled “As Many Pairs of Shoes as She Likes,” is too complex to summarize in just one line; it aims to be a review of contemporary feminism itself. And it is a good review – it’s intellectually engaged, radical in many of its conclusions and says very mean things about radical feminist Andrea Dworkin, which I like. Turner even name-checks a feminist blog or two. But the casual dismissiveness of that sentence stands out. Feminist bloggers are hobbyists. Other feminists are writers. This mirrors much of the criticism I’ve received while writing at Tiger Beatdown (the blog I founded), or that I’ve seen other women receive online: Feminist bloggers whine, vent, rant, have tantrums. The one thing that we never do, seemingly, is write.

To be fair, I was once a hobbyist, with no real plans to be anything else. My reasons for entering the blogosphere were not grand, noble or artistic. I was in my mid-twenties, living mostly alone in a big city while navigating a sexual and social landscape that felt frighteningly unfair. I looked for answers in dating books and conversations, and found none. So, eventually I got out my old women’s studies textbooks. When I’d exhausted those, I started scouring the Women’s Issues sections of local bookstores. Several of the books I read were by people who ran blogs; I started reading them. I read Feministing. I also read Jezebel, Feministe, Shakesville, Womanist Musings, I Blame The Patriarchy, Racialicious, Feminists With Disabilities, Hoyden About Town and (sooner or later) several dozen Tumblrs. Their writing felt vital and rare.

These blogs woke me up politically. I suddenly saw more than just dating problems and wardrobe issues: I saw double standards, beauty standards, sexual policing, gender roles. And I began to understand, too, how small those concerns were, and how my obsessive focus on them was intrinsically tied to my privilege. The blogs transformed me from an anxiously navel-gazing private person into a… well, into an anxiously navel-gazing political person. But a political person!

I had been interested in feminist theory as a college student, but it had always seemed like an academic concern (probably because I only encountered it within the academy). Feminist blogs gave me that theory in a voice that was urgent – alive, contemporary, emotive. I wasn’t merely discovering new subjects and ideas when I started to read these blogs; I was discovering a new form of writing.

The feminist blogosphere is, of course, a blogosphere – meaning it prioritizes quick expression and conversational slanginess. But that’s not to say it precludes elegance. Consider this sentence from Melissa McEwan:

[Romney] tells stories in which the misfortunes of people who do not share his privilege are the punchline, and he doesn’t understand why the commoners do not laugh, because he has never lived among them or served beside them.

I don’t know how quickly this sentence was composed, but I know that it comes from one of 14 posts McEwan published at Shakesville on March 28. Such output isn’t rare in the feminist blogosphere, a fact that ought to put to rest the idea that these blogs are amateurish.

But suppose that they are? Why, in the long run, would being amateurish be a bad thing for feminist blogs? Why couldn’t it be a choice – even an implicitly political choice – and not a weakness? If Judy Chicago’s installation artwork “The Dinner Party” is any indication, feminists have no problem with craftiness. We have celebrated amateurism in music – what else was the riot grrrl punk rock movement? – and in publishing. The zines of Third Wave feminism were self-published; so were the mimeographed newsletters of the Second Wave. The ungroomed, the untrained and the unprofessional are celebrated in feminist writing. As they should be: A movement can hardly encourage women to reach their untapped potential if it doesn’t recognize and value potential that has been, you know, untapped.

There’s also the fact that feminist blogs reward voices for being what more polite or formal writers would call “ugly.” The pressure of the community, the cycle of instant reward (you will always know what your readers want from you) and instant condemnation (you will always know if you haven’t given your readers what they want) eggs us on to be louder, more confrontational, more provocative.

No target is unacceptable. It’s a literature of confrontation and conflict, and it’s not kind – rebelling directly against the supposed sweetness and niceness of girls. But it’s also, strangely, a literature of inclusion. The most intense conflicts are waged in the name of a more caring world. It can feel paradoxical. But, as much as the feminist blogosphere encourages people to find and voice their anger, it also encourages them to assume a moral seriousness based out of lived experience.

All of this is hard to parse for an eye trained toward well-groomed writing. The blogosphere is anti-hierarchy, anti-professionalism and anti-politeness. It’s fast; it’s loud; it’s rough; it’s provocative. It rewards the experimental and polarizing over the safe and crowd-pleasing. Reading feminist blogs is like listening to punk rock. It isn’t a utopia. Like the rest of the world, acceptance – being cited by influential mainstream publications, or published elsewhere, or invited onto talk shows, or having your picture in a magazine, just like all those Real Writers – can and does depend on privilege. A fact that trans bloggers, disability bloggers and women of color have repeatedly pointed out.

On feminist blogs you will read things that make you rage; you will probably get hurt. But it’s worth it because the power you feel is drawn from real, live writing. That is not the kind of empowerment you get from a freshly knitted sweater.