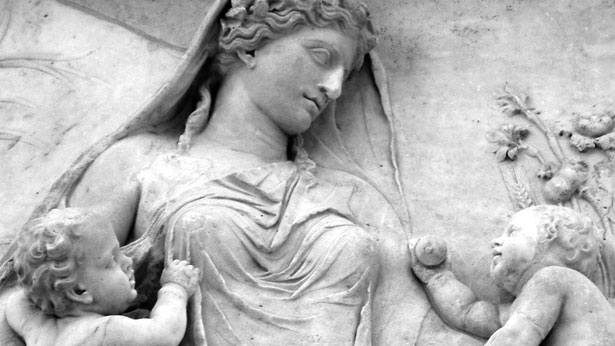 "The mother of him who is called her child is not the creator... ." —Aeschylus

The Impossibilities of Motherhood

For thousands of years, our culture has simultaneously venerated and insulted mothers.

We may have received offerings of chocolates and daffodils on Mother's Day, but we're not forgiven for chronic dissatisfactions and emotional failures.

Nearly 30 years ago, I was trying to write a book about women novelists and the men in their books. Partly inspired by Adrienne Rich, the poet and essayist who died on March 27, and her Of Woman Born: Motherhood As Institution and Experience, I began with a memory:

A young mother is suckling her son. As he wriggles from her into sudden, heavy sleep, milk spurts from her breast and on to the pages of Volume 7 of Proust’s À la Recherche du Temps Perdu. She dabs the book with a muslin napkin, buttons herself, reads on, while her son sleeps. She is an obedient woman, a mother, a cleaner, an androgynous reader.

I was also a smoker in those far-off days, who hadn’t quite got the face to admit that I might easily have flicked ash into my baby’s adorable ear. Even then I was grappling with the impossibilities of motherhood; I still am. That cornucopia of love and sustenance and approval, selfless and adoring, was also a transgressor, set to be the disappointment all mothers must inevitably be given, the promise they embody and the dangers they are bound to deliver.

The version of motherhood that Aeschylus expressed in 458 B.C. and which most societies have adopted – that “the mother of him who is called her child is not the creator, but merely the nurse of the young life which is sown in her” – downgrades the importance of women in the process, while reminding us of our duties as caretakers, teachers, feeders.

Opponents of contraception and abortion can seem to believe that conception and pregnancy are hardly women’s business and should certainly not be left to them. Their job comes later. And they’d better be careful. Those words of Aeschylus were uttered, after all, in justification of a son’s murdering his mother. And if we survived the breastfeeding there was no reason to suppose we’d be any good at the next bits: the teenage years, let alone our children’s adulthood and marriage and the moment when they become parents themselves.

There is no end to public discussion of what constitutes a good mother and what makes for a bad one. Most mothers – neglectful or oppressive or pushy, ambitious or needy or depressed – portrayed in their sons’ and daughters’ novels and autobiographies, for instance, get pretty low marks. Jane Austen’s mothers are tearful or silly or snobbish or dead. The critic Lionel Trilling didn’t hesitate to remind us that women generally, in real life as well as in novels, only “exist in a moon-like way, shining by the reflected moral life of men. … They seldom exist as men exist – as genuine moral destinies.” Motherhood doesn’t, it seems, confer a soul or a destiny, or, necessarily, a viable living.

We may have received offerings of chocolates and daffodils on Mother’s Day, but we’re not forgiven for chronic dissatisfactions and emotional failures. Mothers (and absent fathers) were thought responsible for last summer’s London rioters, as they are for school truants. Recently in the British press, and on radio and TV, there have been furious exchanges between women who can’t have children and those who can and do. Mothers are accused by women who haven’t got children of being smug, complaining a lot and not being much good at it.

Women of all kinds, but especially mothers, are by a long way the losers from the current cuts in social services and public-sector work and from alterations to the tax system in Britain. It is the poorest women who have lost their jobs, the cleaners and lunch ladies. Female unemployment has increased 19 percent since 2009. There are some local governments where 100 percent of those who have been sacked are women. A survey conducted by Workingmums.co.uk found that almost a quarter of all working women had left employment last year and that 16 percent had reduced their hours in order to look after their children, because child care costs have become exorbitant.

The memory I began with is 55 years old. Women have come a long way since then, so it is all the more shocking to see that intensifying economic and social inequalities are restoring mothers to their old double bind: the source of everything we need and the source of trouble.