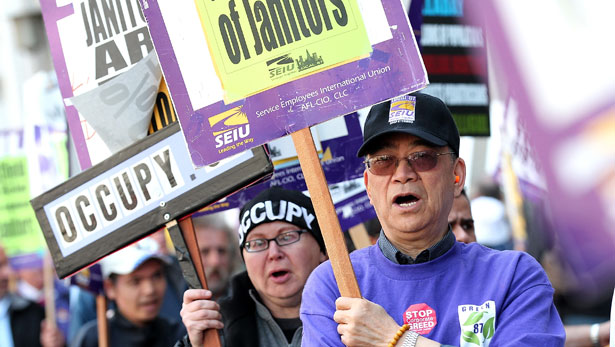 Can Labor Strike Back?

Circumventing the law is a provocative tactic, but it may just be the Hail Mary we've been looking for.

On May Day, tens of thousands of Americans took to the streets. Invoking labor’s militant past, Occupiers in many cities called it a “general strike.” But few have asked why even the traditional strike has become almost an anachronism for America’s labor movement. In 1974, there were 424 major work stoppages, each involving at least 1,000 workers. By 2009, only five such stoppages occurred.

It’s easy to see this trend as damning evidence of labor’s irrelevance and the need to find a fresh wellspring of social and economic change. It’s even easier to place the blame squarely at the feet of conservative union leaders. Both these views lack nuance. Labor unions face a legal framework stacked against them. Laws can’t be casually broken: Unions have an important responsibility to their members and the financial assets they safeguard. Yet it’s worth remembering that past labor leaders believed in industrial action on a scale that would seem revolutionary even to radicals in the movement today. Figures like Samuel Gompers, Dave Beck, George Meany and Walter Reuther thought the strike was the most effective weapon of the working class. The decline of this venerable tactic has been devastating to our unions.

Wider economic trends have worked against labor for decades. Internationally, the 1970s saw the intersection of weak growth and persistent inflation. This structural crisis was resolved against the interests of working people, with the aftermath especially stark in America. Real wages have declined and our social safety net has eroded, while hyper-mobile corporations are glossier and equipped with slick public-relations departments, but just as exploitative as ever.

The response from reformers within the labor movement hasn’t helped matters. As Joe Burns writes in Reviving the Strike: How Working People Can Regain Power and Transform America, “Adapting their own ideas to match this new conservative reality, these activists created the one-day strike, the corporate campaign and social unionism – tactics that functioned comfortably within the existing structures imposed by management and the legal system.”

If unions need to strike like they used to, but can’t because they’re justifiably afraid of the legal repercussions, what can be done?

Circumventing the law is a provocative tactic, but it may just be the Hail Mary we’ve been looking for.

Burns argues for the erection of independent worker organizations without assets or property that would be able to get around laws that make it difficult for unions to legally strike. Though this idea was endorsed by the American Federation of Teachers in a 2005 memo on possible future labor strategies, it’s considerably more militant than most unions are ready for now.

But in a sense, the Occupy movement may be a positive influence. Labor lends its numbers, discipline and organization, while Occupy invokes a rich history of American civil disobedience.

During the past 30 years the U.S. union movement has become more progressive on issues of immigration, foreign policy and the environment, but union membership continues to fall. Yet the return of mass demonstrations offers a new climate for labor. Now is the perfect time to remember how to fight.