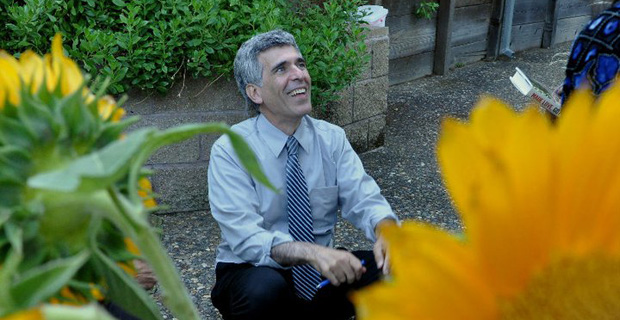 The veteran activist and writer may become one of the most progressive people on Capitol Hill.

Solomon decided that, at this point, running for Woolsey’s vacant seat was the best way to advance the movement.

Norman Solomon isn't the typical candidate for Congress. And that's a compliment – he might actually be one of the most promising candidates ever, from a progressive standpoint.

Solomon is running for the House seat currently held by Rep. Lynn Woolsey, a reliable progressive who represents California's Second Congressional District. Woolsey is retiring. The district, recently redrawn, now consists of a narrow strip of land that extends along the coast from the Golden Gate Bridge to Oregon's southern border.

The Second District is among the most left-leaning in the nation, so there's no doubt that a Democrat will replace Woolsey. The question is: What kind of Democrat?

Solomon became an activist for progressive causes in his early teens and has stayed true to that path for nearly half a century. His policy positions include support for legalizing marijuana, for single-payer healthcare, for public financing of elections, and for ending corporate personhood by constitutional amendment. But the most unusual fact about him, given the current political context, is that he doesn't accept money from political action committees or lobbyists. Instead, his campaign is funded solely by relatively small donations – about $100, on average – from thousands of individuals.

The frontrunner in the race, Jared Huffman, bills himself as “one of the state's top environmental leaders” and has served three terms in the California State Assembly. His great advantage is name recognition. As an Assembly member, he represents more than half the population of the redrawn district. He also has the endorsement of the state's political and media establishments, including Sen. Dianne Feinstein and the San Francisco Chronicle.

But the sources of his funding have become a liability for Huffman, who accepts money from both lobbyists and corporations. The Anderson Valley Advertiser, a legendary Mendocino County weekly newspaper, reports that “Jared Huffman's donor base reflects the realities of a decades-long class war waged by the top 1-5% against the bottom half of America. Huffman's biggest and most well-organized donors are wealthy Marin County lawyers, real estate investors, bankers, and executives of major corporations. Some of them are liberals, but many are conservatives. Most of the liberals seem to make their money by representing the interests of conservative corporations.”

Solomon, for his part, is a Democrat who works within the party – he was an Obama delegate at the 2008 Democratic National Convention – while spending most of his time and energy trying to building the progressive movement. A former director of Fairness and Accuracy in Media, a media watchdog organization, Solomon founded the Institute for Public Accuracy in 1997, and has published several books on the subject of media bias, including War Made Easy: How Presidents and Pundits Keep Spinning Us to Death. (He's also contributed articles to In These Times since the 1970s.) He was a strong voice of dissent in the months before the war in Iraq, and he's a popular teacher and speaker – in California and across the nation – on behalf of progressive causes. Most recently, he has been deeply involved with the Occupy protests in California.

Solomon decided that, at this point, running for Woolsey's vacant seat was the best way to advance the movement. “His thinking was, instead of just speaking truth to power, let's take power,” said Jeff Cohen, Solomon's longtime friend and writing collaborator, “without in any way surrendering the progressive values and ideals.” Last year, in explaining why he was thinking about running for the seat, Solomon wrote that “dysfunctional relationships between liberals in Congress and progressive social movements serve as enablers for endless war, massive giveaways to Wall Street, widening gaps between the rich and the rest of us, erosion of civil liberties, outrageous inaction on global warming, and so much more.”

Solomon has been endorsed by several of the district's weekly newspapers as well as the International Longshore and Warehouse Union and Democracy for America. He finished second of nearly 200 candidates in the latter group's online “Grassroots All-Stars” competition.

The primary election will be June 5. According to California's new open primary rules, the top two vote-getters, regardless of party, will move on to the general election. Recent polling by the Solomon campaign puts him second among the dozen candidates who are running.