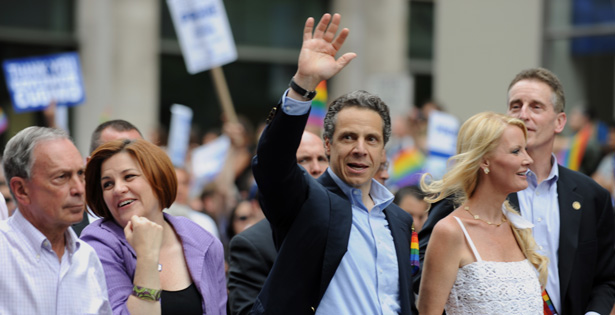 A Rare Admission That Money Trumps Everything Else

The governor is acknowledging that professional politicians will champion initiatives that don't challenge corporate power, but will avoid promoting those that do.

Headlines transmit information in its rawest form – and the best of headlines crystallize indelible truths. Such was the case this week when the New York Daily News blared this simple but iconic headline: “Cuomo: Minimum Wage Harder to Get Than Gay Marriage.”

The story quoted New York Gov. Andrew Cuomo (D) claiming that the effort to raise wages for the poorest of his constituents represents a “broader and deeper” divide than the recent successful fight to legalize same-sex matrimony in the Empire State. Though the piece quickly dissolved into the ether, it should have received more attention because it is an important Rosetta Stone—one that translates this era’s inscrutable political rhetoric into a clear admission that money trumps everything else.

Decoding this Rosetta Stone requires just a bit of contextual information from Siena College. According to the school’s surveys, only 58 percent of New Yorkers support legalizing gay marriage, while a whopping 78 percent support raising the minimum wage from $7.25 to $8.50.

Put Cuomo’s declaration next to those numbers, and the revelation emerges: in a political arena dominated by corporate money, the governor is acknowledging that politicians will champion initiatives that don’t challenge corporate power, but will avoid promoting those that do. Not only that, Cuomo is admitting this is the case regardless of public opinion.

Events in New York illustrate the larger dynamic at work. As the New York Times reported, despite lukewarm public support, Cuomo was able to get the state legislature to legalize gay marriage after Wall Street financiers dumped cash into the campaign for equal rights. Knowing that marriage doesn’t threaten their profits, these moneyed interests opted to help their ally Cuomo notch a strategic win—one that allows the governor to preen as a great liberal champion to the state’s left-leaning voters, all while he simultaneously presses an anti-union, economically conservative agenda that moneyed interests support.

Now, of course, the situation is reversed. With New York’s recession-battered voters supporting a minimum wage hike, the greed-is-good crowd is firmly aligned against the initiative. Why? Because unlike gay marriage, which requires no corporate sacrifice, the modest minimum wage boost may slightly reduce corporate profits—and that’s something the fat cats in the executive suites never permit without a fight.

Knowing this, a hack like Cuomo—a guy who asks “how high?” when his campaign contributors say “jump”—is using his power to undermine the popular minimum wage initiative. In this case, he is cooking up a self-fulfilling prophecy about the measure being a political non-starter.

Not surprisingly, this sleight of hand is not limited to one locale. In Colorado, Democratic activists have cast Gov. John Hickenlooper as a great liberal for supporting same-sex civil unions, all while he loyally shills for oil and gas corporations. At the federal level, the Obama reelection campaign is doing the same, trumpeting the president as a progressive hero for endorsing gay marriage, all while he slow-walks tougher bank regulations.

Even on Wall Street itself, Goldman Sachs CEO Lloyd Blankfein has lately portrayed himself as a great humanitarian. As proof, he doesn’t cite any willingness to acknowledge financial-sector crimes. Instead, he cites his decision to become the Human Rights Campaign’s national spokesman for gay marriage.

Noting all this isn’t to disparage the push for same sex marriage (I’m a strong supporter!)—it is merely to spotlight a bait and switch whereby social issues are increasingly used to perpetuate the economic status quo.

Obviously, it’s possible to simultaneously guarantee equal rights and fix the economy. But as New York most recently proves, it’s much harder to do both when money dictates political outcomes, and when bought-off politicians employ social issues as an excuse to ignore economic justice.