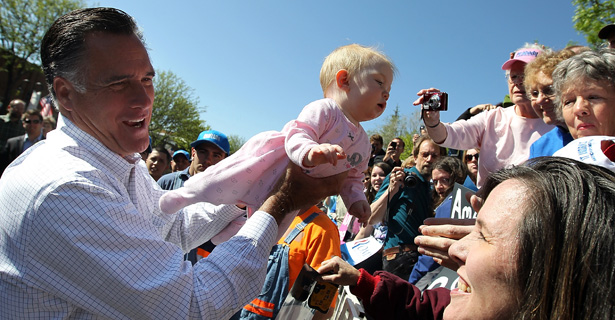 Shiny Objects Are People, Too

Why the Romney campaign’s distinction between “economic” and “social” issues is false.

Economic violence is real violence. It impacts people. It changes lives. And it's what conservative fiscal policies enact.

You know, feminism has been around for quite a while now. We’ve gone through at least three waves, countless publications, more backlashes than you can count, and the invention of the automobile, the long-playing record and the iPhone. And in that time, if we’ve learned anything at all, we’ve learned this: Women respond really, really well to being called “objects.” Also, to being told that “their” issues are separate from “real” ones.

Last week, it was “shiny objects,” and the more important issues were “economic.” Such were the words of senior campaign adviser Eric Fehrnstrom, on ABC’s “This Week,” participating in a panel on the famed “women’s vote.” George Stephanopoulos read aloud a quote from an Obama adviser, listing an ominous array of social changes that might occur, should Romney be elected: “Potentially abortion will be criminalized. Women will be denied contraceptive services. He’s far right on immigration. He supports efforts to amend the Constitution to ban gay marriage.”

Now, it’s true that putting all this together makes Romney sound particularly evil. But not nearly as evil as Fehrnstrom did, blandly and calmly replying, “good luck with that.”

“Mitt Romney is pro-life,” Fehrnstrom said. “He’ll govern as a pro-life president, but you’re going to see the Democrats use all sorts of shiny objects to distract people’s attention from the Obama performance on the economy. This is not a social issue election.”

For those keeping track, that’s not just women and people who need abortions or contraceptives, but also immigrants and LGBT people being deemed shiny. One imagines that those who happen to fall into the intersections of those three groups gleam especially brightly in Fehrnstrom’s and/or Romney’s eyes.

But the distinction between “economic” issues and “social” ones is inherently false, particularly as it pertains to reproductive choice. The economy isn’t separate from issues of choice, nor is it separate from any issue we might refer to as a “woman’s issue.” (Which, one hopes, extends beyond the simple matter of whether to have a baby.)

“Poor women are more likely to terminate unintended pregnancies than their more well-to-do counterparts,” explains one study.” As more women and families fall below the poverty line and are otherwise constrained by financial circumstances, abortion rates can be expected to rise.”

But then, people don’t have abortions unless they can afford them, either. In 2009, USA Today quoted Stephanie Poggo of the National Network of Abortion Funds, who said she’d spoken to women who’d “cut down on food” and put off paying bills in order to afford abortions, but still couldn’t work up the necessary funding.

These stories speak to one larger fact: Well-off, socially privileged women will always be able to have abortions, or children, if they want them. Since there has been a relatively safe, sterile medical procedure to terminate a pregnancy, doctors of good conscience have been performing it for their patients. Before Roe v. Wade, the people who died from botched, unsafe or self-administered abortions were usually poor, young or lacking in the social connections necessary to find a real doctor who could provide a discreet D&C. And those, not coincidentally, are the same people targeted by economic attacks on reproductive health care, such as banning insurance coverage for contraception or abortion, or by measures such as H.R.3, which aimed for the reproductive rights of people on Medicaid.

Economic violence is real violence. It impacts people. It changes lives. And it’s what conservative fiscal policies enact. Cutting social programs such as domestic violence shelters (which are actually needed more often during times of economic strain), denying necessary insurance coverage for reasons of personal religious belief, or attacking institutions like Planned Parenthood that provide affordable reproductive health care, doesn’t strengthen the economy in any way. What it does is penalize the poor, making them less able to access contraception, and more likely, if they are pregnant, to need the abortions that Romney, as a potential “pro-life President,” would claim to abhor.

And yes, they potentially make those abortions less accessible. But no matter what laws we may pass against abortion, the existence of the technology means that abortions can, do, and always will happen—particularly among the rich, privileged and connected. Basically, even if Mitt Romney did criminalize abortion, he’d criminalize it for everyone except for the wives and daughters of men like Mitt Romney.

Economic issues are social issues. There is no election that does not depend on both. And in both cases, a policy that privileges only the richest is harmful. If Romney wants to make this an “economic” fight, and to do so on fiscally conservative grounds, well, he can. But in either case, he can’t do so without betraying how very wrong he is about women.