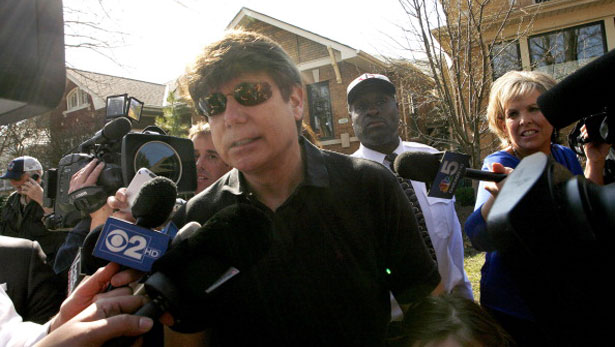 Former Illinois governor Rod Blagojevich holds a news conference outside his Chicago home on March 14, 2012, the day before he reported to federal prison. (Photo by Frank Polich/Getty Images)

“Chicago-Style Politics” Is Simply Business As Usual in D.C.

It took a while, but Republicans finally put two and two together.

Chicago is known for political corruption. President Obama’s home base is Chicago. So accusing him of “Chicago-style politics” is a surefire winner, right?

Not really, as it turns out. Republicans have thrown the insult around a lot over the past few months, but it hasn’t added up to much of an advantage. That’s in part because Obama doesn’t have any significant scandals in his record. It’s also because Republicans’ use of the phrase doesn’t make any sense.

When Clint Eastwood appeared in a Super Bowl ad for Chrysler, for example, and talked about Detroit’s comeback, Republicans complained that the ad had a thinly veiled pro-Obama slant. It was Obama, after all, who pressed ahead with the successful government bailouts of GM and Chrysler.

GOP strategist Karl Rove pretended to be “frankly offended” by the ad and called it “a sign of what happens when you have Chicago-style politics.”

It got even rougher. When Senate Republicans filibustered Obama’s nomination of Richard Cordray to lead the Consumer Financial Protection Bureau, Obama bypassed the GOP and made Cordray a recess appointment. Mitt Romney said this was “Chicago-style politics at its worst.”

Has Chicago’s reputation as a cesspool of corruption really fallen so far, so fast? It must be an embarrassment to actual practitioners of Chicago-style politics.

For the record, here are some real examples of that art. During Prohibition in the 1920s, Mayor William “Big Bill” Thompson – who couldn’t be “bought, bossed, or bluffed,” according to one of his campaign posters – made re-opening the city’s speakeasies one of his priorities. The mobster Al Capone, who stood to benefit from that plan, donated a quarter of a million dollars to his campaign. When Thompson won the election, Capone set up a gambling operation near the mayor’s office.

In 2009, Chicago Alderwoman Arenda Troutman was convicted and sentenced to four years in prison for tax and mail fraud. During her “five-year crime spree,” as the prosecution put it, she demanded payoffs for everything from zoning changes to land-use requests to alley access.

“The thing is,” she once explained in a secretly taped conversation, “most aldermen, most politicians, are hos.”

“Most” might be an exaggeration. But 31 aldermen in Chicago have been convicted of corruption since 1973. In addition to bribery, their crimes include embezzlement, tax evasion, extortion, racketeering, insurance fraud, and mail and wire fraud.

Corruption is no less a problem at the state level. You’ve heard of Rod Blagojevich? The former governor of Illinois is now serving the first year of a 14-year prison sentence, having been convicted last year on 18 counts of corruption. He tried to sell the U.S. Senate seat vacated by Barack Obama, most notably, but that was just the beginning. If the campaign contribution was large enough, nearly everything was up for sale in his administration – state jobs, contracts and appointments.

As a result, Blagojevich became the fourth governor of Illinois since the 1970s to spend time in prison. His predecessor, George Ryan, is still serving a sentence for corruption during his tenure as Secretary of State, when unqualified truckers could pay a bribe to get a license. Eventually, one of the drivers was involved in a horrific accident in which six children, all from the same family, burned to death in a minivan.

Blagojevich actually won his first election in the immediate wake of Ryan’s disgrace, promising to be a reformer. He obviously didn’t live up to his promise.

But here’s an interesting twist. The embarrassments of the Ryan and Blagojevich administrations have actually inspired the passage of serious reform legislation in Illinois. In 2009 the current governor, Pat Quinn, signed into law a bill that sets limits on contributions and unions.

That legislation goes to the heart of Chicago-style politics, which isn’t really about hardball tactics and ruthlessness, as Karl Rove and Mitt Romney seem to suggest. What connects virtually all of the corruption cases in Chicago and Illinois is money – “the mother’s milk of politics,” as Jesse “Big Daddy” Unruh famously put it.

Politicians and government officials have the power to grant favors and tilt the playing field this way or that. Individuals and corporations trade money in return for these favors and unfair advantages. Politicians take the money and pocket it, or use it to advance their careers. The more money in play, the more corruption there will be. It isn’t that complicated.

All the rest of it – the ruthlessness and sleaziness that Chicago and Illinois are famous for – is just a symptom of the money disease at the heart of system.

So it’s curious that, while Illinois has been embarrassed into action and is actually trying to reduce the influence of money in its politics, we’ve embarked as a nation on an experiment in virtually uncontrolled political spending. And the people who stand to benefit know a good investment when they see one.

An analysis of the American Jobs Creation Act, passed in 2004, found that corporations saved $220 in taxes for every dollar they spent on lobbying for the bill. That return on investment may be exceptionally high, but there’s a good reason that the lobbying expenses of politically active organizations by one estimate from nearly $1.5 billion to nearly $3.5 billion between 1999 and 2009. The reason is that lobbying works. It’s a classic win-win.

Special interests get their tax breaks and other favors. Politicians get their campaign contributions and whatever under-the-table payoffs they can wangle. The only loser is the American public.

The Supreme Court’s Citizens United ruling takes that process of corruption to a whole new level. Unaccountable super PACs, funded largely by corporations and the wealthy, will invest hundreds of millions of dollars in the election process over the next several months. You can bet that the returns on their investments will be substantial.

That’s what “Chicago-style politics at its worst” actually looks like. Except that in Chicago and Illinois, corruption is still illegal. People are actually put on trial and convicted for it. Then they go to prison.

In Washington, D.C., the corruption is called free speech, and it’s business as usual. And business these days is very, very good.