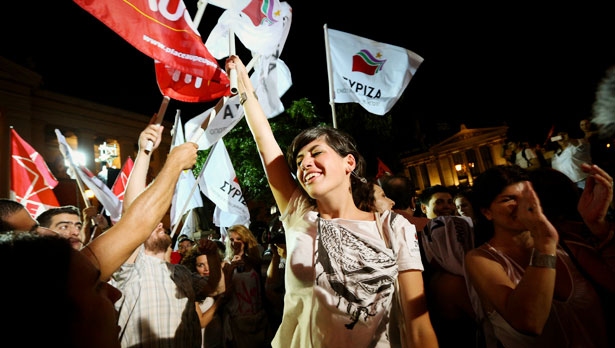 In Greece, social democracy is cadaverous, but as yet the social struggles have not produced organs of popular power. Syriza offers a mediating factor between the two.

After a period of worrying decline, some of Europe’s Left parties, formed to contest social democracy from the Left, are on the rebound. The remarkable surge of Syriza in Greece is the latest indication of this, emerging in the May 6th elections as the main contender to consolidate the Left. With 16.8 percent of the total, Syriza finished second, only two points behind the center-right New Democracy.

What made this possible is the imposition of “austerity” policies that cut public spending, reduce wages and redistribute the burden of taxes to the working class. Greece’s debts have been used as a pretext for a series of assaults on the public sector. In order to secure funds from the European Union to pay off debts to Europe’s major banks, Greece had to sign on to the Memorandum of Understanding, which imposed cutbacks and mandated the sell-off of $66 billion worth of public assets at fire-sale prices.

Proclaiming a radical agenda—tearing up the Memorandum, nationalizing banks, raising the minimum wage, restoring lost benefits for workers, and ending cuts to public-sector jobs—Syriza surprised everyone, coming closer to taking office than any other left-of-social-democracy formation in Europe. It has displaced the traditional social democratic party, Pasok (Panhellenic Socialist Movement), as the main party of the Greek working class, beating Pasok in many of its traditional urban strongholds (above all, in Athens). Among blue-collar public-sector workers, Syriza won 27 percent, compared to 10.6 percent for Pasok. Among blue-collar private-sector workers, it won 21 percent, compared to 7 percent for Pasok.

The significance of this is obvious. The stakes in Greece’s struggle are graver than any situation in Europe since the Portuguese Revolution in 1974.

Roots of the crisis

Historically, Greek capitalism has been built on the basis of shipping and finance. These two sectors have led Greece’s political power bloc, have never paid taxes to support a welfare state, and don’t to this day. As such, the Greek welfare state, constructed by Pasok after the dictatorship collapsed in 1974, was funded by the taxes of workers, and extensive borrowing. The result was accumulating budget deficits.

But the strategy of the power bloc was to fully integrate into the European Union, where such deficits were taboo. They were to be suppressed through spending cuts and restructuring, with the remainder concealed by Goldman Sachs. The trouble, though, was that Greece’s role in the Eurozone was to act as an export market for Europe’s core economies—above all, Germany. This escalated public and private debt in Greece. If the illusion was that growth—spurred by financialization—would eventually pay the bills, the “credit crunch” was a merciless reality check.

When Pasok was elected in 2009 to reverse a series of cutbacks, the country’s debts were four times the EU limit. Unwilling to tax the rich, the party’s solution was fiscal “credibility”—meaning austerity, soaring unemployment and people dying due to lack of medicine.

This began a cycle of protest that recalls the aftermath of Greece’s military junta. From the student movement to the Indignados, from the first to the last of 17 general strikes, the tempo has varied, but the trend is one of intense polarization, largely favoring the Left. The problem for Pasok, and the “technocratic” coalition that briefly succeeded it, was that the Greek working class had not suffered a serious defeat of the sort that had been dealt to other groups of workers—airline workers in the U.S., for example, or miners in the U.K.

Nor had Greek communism been vanquished. In addition to a number of organizations of the radical Left, major factions were present in the Greek Communist Party and Syriza, both of which contributed to radicalization. Five years of recession, social struggle and escalating austerity have produced a situation in which one faction came close to leading a government of the radical Left. This crisis is not just of an economy or a state, but of a whole social compact, and the systems of political and ideological representation that have bound it together.

There is little agreement among the European Left about what kind of organization Syriza is. From one perspective, it is a typical reformist group with a pro-European strategy that (radical rhetoric aside) will tend toward conciliation with European elites. Those who take this view note the dominance of the ex-Eurocommunist formation Synaspismós (Coalition of Left Movements and Ecology), which makes up about 85 percent of the membership.

A few factors complicate this picture. First, while the radical fringe in Syriza is far from dominant, it is not negligible. Among Syriza’s constituents are the Communist Organization of Greece, a Maoist organization and the second-largest group in the coalition, and the International Workers Left, a Trotskyist party. Though the dominant forces in Syriza are indeed relatively moderate, the other forces are not a mere appendage. The stances that emerge are the result of complex forces within the organization as well as from external pressures.

Second, Synaspismós has its Right and Left currents internally. Its very structure, seeking to form a “canopy” of the Left, encourages platforms and internal differentiation. Its participation in social movements drew in leftist youth, and the old right-wing leadership that once pursued a (brief, disastrous) alliance with New Democracy was defeated in 2004. Synaspismós has since pursued alliances with the radical Left rather than simply seeking favor with Pasok, and many of its right-wing leaders eventually defected to form the Democratic Left, now a partner in the coalition government.

Third, Syriza’s pro-European stance has not been static. While Syriza still favors remaining in the Eurozone, there is growing dissent internally, led by its Left leaders such as Panagiotis Lafazanis. The slogan before May was “not one sacrifice for the euro,” reflecting a much more ambiguous, critical stance (though in practice, this slogan was dropped some time before the May election).

Syriza answers the need for a mediating factor between complicit social democracy, which offers at best timid resistance to the worst aspects of austerity, and an abstract maximalism, which poses revolutionary demands in a situation that is not revolutionary. In Greece, social democracy is cadaverous, but as yet the social struggles have not produced organs of popular power. The majority of Greek workers are looking for a Left government to stop austerity, and this was the slogan that Syriza raised before the May elections.

Syriza’s proposals are not especially radical—and are even to the right of where Pasok once stood—but they pose an intolerable dilemma to European capital. The main plank of Syriza’s agenda was to revoke the laws implementing the Memorandum, and force a renegotiation. In the course of fighting the subsequent election in June, Syriza’s leaders tried to soften the unilateral element of this policy. But notably, they stuck with it. When Syriza leader Alexis Tsipras held his final election rally on June 14, he was clear that if Syriza won, the Memorandum would be dead.

For Europe’s leaders, this meant either renegotiating the Memorandum (thus accepting a political defeat and setting a dangerous precedent), or forcing Greece out of the EU (at the risk of destabilizing the Eurozone). Syriza’s plan would have relieved some of the burden from Greek shoulders, putting the crisis back in the heart of Europe.

In the June 17 elections, Syriza advanced to 26.8 percent of the vote. However, this was not enough to win, due to the consolidation of the right-wing vote around New Democracy, which garnered 29.6 percent. A major factor in New Democracy’s increase was the intimidation campaign mounted against Syriza. European leaders let it be known they would not renegotiate; if Greece voted the wrong way, it would be forced to withdraw from the euro, and be cast into destitution. In the last week, a panic campaign led to savings being withdrawn from Greece, which shifted the advantage away from Syriza. The result was a relief for EU leaders, and a defeat for Greek workers.

But the new government is only as stable as Greek society is, or as the EU is. We may yet see Syriza’s strategy put to the test.

Richard Seymour is a Northern Irish writer and owner of the popular blog Lenin's Tomb. He has written for The Guardian, London Review of Books, and Al Jazeera and is the author of several books, most recently Corbyn: The Strange Rebirth of Radical Politics (Verso).