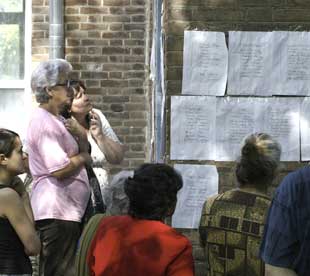 The people of Beslan read lists of those killed in the hostage crisis.

Citing a summer wave of terrorist attacks that killed 430 people, President Vladimir Putin last month ordered sweeping changes to the country’s political system that will effectively abolish regional gubernatorial elections, sharply reduce the space for independent politics and accelerate the pro-Kremlin United Russia Party’s merger with the state bureaucracy to create a single party-state behemoth reminiscent of the former Communist Party of the Soviet Union. “After these changes I am in a state of shock,” says Yevgeny Yasin, a former Russian Economics Minister, now head of research at the Higher School of Economics in Moscow. “This is directed against the democratization of the country and can only lead to an authoritarian regime.”

Boris Yeltsin destroyed Russia’s first freely elected parliament in a violent confrontation 11 years ago and used his victory to write a new constitution that granted the lion’s share of power to the Kremlin while reducing the legislature to little more than ornamental status. Since coming to power about 5 years ago, Putin has further shrunk the role of elected representatives, reimposed state control over much of the media, cracked down on politically active nongovernmental organizations (NGOs) and beefed-up security services. Each turn of the screw has been rationalized by increasingly severe terrorist attacks, from a wave of still-unexplained apartment bombings in 1999, to the seizure of 800 hostages in a Moscow theater two years ago, to the horrific siege of a North Caucasus school last month that killed 330 people, mostly children (see “The Bloodiest Chapter,” October 11).

A raft of Kremlin-authored bills are currently before the State Duma, where United Russia’s two-thirds majority is expected to deliver them with few amendments into law before year’s end. The most controversial ones will claw back the right of Russia’s 89 regions to directly elect their governors—won after considerable struggle a decade ago. Instead, the Kremlin will propose its own candidate to be “endorsed” by each local legislature.

If regional lawmakers should reject the president’s nominee, the draft law empowers the Kremlin to dissolve the uncooperative legislature and appoint an “interim governor” entitled to serve for five years. Putin argues the measures are needed to restore central authority and curb abuses by governors, some of whom have been in thrall to local oligarchs or crime bosses. But critics see the move as a cynical power grab.

“Putin wants to use this opportunity to destroy the last vestiges of Yeltsin-era democracy,” says Alexander Golts, a national security expert with the weekly Yezhenedelny Zhurnal. “Instead of attacking terrorists, he’s attacking our electoral system.”

Another draft law would truncate Russia’s mixed electoral process, under which half of the State Duma’s 450 seats were chosen proportionally through voting for centrally compiled party lists, and the other half through first-past-the-post local constituency races. Under the new system all deputies will be elected from party lists, a change that will crush regional independents and strengthen the hand of big Moscow-based parties, especially the state-backed United Russia.

“Putin [says he] wants to create an American-style two party system, which would increase stability in a huge and volatile country like Russia,” says Sergei Strokan, a political expert who writes for the liberal daily Kommersant. “But the problem is that Russia lacks any developed, independent political parties. The state already dominates the political field, and therefore these measures could just end up enhancing the bureaucracy.”

Another, less-noticed bill would lift the Yeltsin-era ban on senior civil servants joining a political party. That can only benefit the Kremlin’s creature, United Russia, which has burgeoned to 700,000 members in the past year—about twice the size of its nearest conceivable rival, Russia’s post-Soviet Communist Party. Nearly half of all regional governors, eager to curry favor with the Kremlin, have joined United Russia, most in the past month.

“As soon as bureaucrats see that a tightly centralized power system is returning into force in Russia, there is no doubt they will rush to join the party of power,” says Sergei Kolmakov, vice president of the independent Foundation for the Development of Parliamentarism in Moscow. “When the bureaucratic chain-of-command becomes consolidated into a single party, that party will dominate the state and the nation. People from all sections of the elite will also want to join, to get closer to the sources of power.”

The public culture of fear and suspicion that marked the last century’s Stalinist experiment in central state-building also is creeping back. “In our besieged country there has emerged a fifth column of left and right radicals,” said Vladislav Surkov, deputy head of the Kremlin administration, in a recent interview with the daily Komsomolskaya Pravda, in which he hammered at “enemies” inside and outside the country. “False liberals and real fascists have more and more in common, the same foreign sponsors, the same hatred toward Putin’s Russia, as they say, but in fact toward Russia as such.”

Fred Weir is a Moscow correspondent for In These Times and regular contributor to the Christian Science Monitor, the London Independent, Canadian Press and the South China Morning Post. He is the co-author of Revolution from Above: The Demise of the Soviet System.