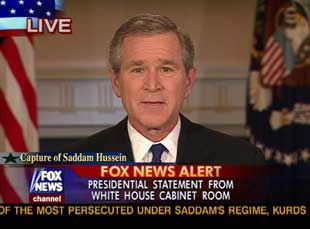 The joint rise of the conservative media and creeping authoritarianism is no coincidence.

This article was adapted from the author's book, Secrecy and Privilege: Rise of the Bush Dynasty from Watergate to Iraq.

The terrorist attacks on September 11, 2001, may have ignited the fire that has driven the United States in the direction of a more authoritarian system. But the kindling was put in place over three decades.

The conservatives who set the United States off in this political direction in the ’70s had no idea where the journey would end. Their original thinking was more defensive than offensive. The elder George Bush started out as a kind of Mr. Fix-it with gold-plated connections in both the Eastern Establishment and the Texas Oil World. He knew how to defuse a scandal and hide the incriminating evidence. He worked diligently, though ultimately unsuccessfully, to protect Richard Nixon from Watergate. He was more successful in getting the CIA off the front pages for Gerald Ford in 1976. Bush’s cover-up skills enhanced his own power during the Reagan-Bush era of 1981 to 1993 and saved the family name so his sons could build their own political careers.

In the ’90s, the younger George Bush entered a political world where the conservatives were already in the ascendancy and the liberals were on the run. His contribution was an intuitive grasp of how hardball Republican strategies, aggressive conservative news outlets and mystical Christian fundamentalism could blend into a potent political coalition and consolidate the Right’s dominance of U.S. government power.

Indeed, Bush picked up useful lessons during his father’s 1988 presidential campaign against Michael Dukakis. Doug Wead taught Bush how to signal to the Christian fundamentalists. Lee Atwater passed on the tricks for turning a decent opponent into a national laughingstock.

Some liberal activists wonder why Democratic leaders are often so circumspect. Why, they ask, don’t the Democrats just let it fly like the Republicans do? The cautious tone turns off much of the Democratic base while leaving many independent voters questioning whether the Democrats really know what they stand for.

The Democratic-defensive dynamic, however, is a consequence of the media-political infrastructure that Republicans and conservatives have spent three decades—and billions of dollars—creating. This conservative infrastructure has helped the Republicans achieve a unity that often has been lacking on the Democratic side. Conservatives can consult dozens of well-financed media outlets to hear the latest pro-Republican “themes,” often coordinated with the Republican National Committee or Bush’s White House.

Liberals lack any comparable media apparatus, having failed to match the investment and dedication of the right. Those committed liberal outlets that do exist are almost always under funded and often part-time. The Republicans’ right-wing media has given them a powerful advantage—and one that does not seem likely to go away.

This media deficit puts the Bush critics at a particular disadvantage because their arguments require explanation of historical context and acceptance of the frustrating work of diplomacy. On the other hand, Bush’s argument is easier to grasp: Kill the bad guys.

In the 2000 election, Bush’s simple, easygoing style, which conceals a fierce competitiveness, made Bush a sellable commodity to the American people (especially to white men), a darling of the conservative news media and a favorite of many mainstream journalists.

Add the fear and the sense of victimization from the 9/11 attacks and a new political model suddenly lay open as a possibility for the United States. It would be a post-modern authoritarian system that would rely less on traditional repression of political opponents than on a sophisticated media operation to intimidate and marginalize dissidents.

The new system would be the sum of the parts gradually arising out of the ruins of Watergate. At its core would be the intelligence concept of “perception management” not so much Orwellian as post-Orwellian. While Orwell’s 1984 envisioned sophisticated torture to extract confessions and mass speeches to stir up ethnic hatreds, this new system would rely on ridicule to make those who get in the way objects of derision, outcasts whose very names draw eye-rolling chuckles and knee-slapping guffaws. Think of Dukakis wearing a helmet, Bill Clinton and a semen-stained dress and Al Gore inventing the Internet, not to mention any number of lesser-known public figures who were so foolish as to object to the rush to war in Iraq.

George W. Bush was the perfect candidate for exploiting this transformation. Lacking a deep appreciation for the American constitutional system of checks and balances, Bush wasn’t personally repulsed by the notion of shifting to a more authoritarian structure of governance and silencing meaningful dissent. Indeed, he was attracted to the idea.

After claiming the presidency in December 2000, Bush once joked, “If this were a dictatorship, it would be a heck of a lot easier—so long as I’m the dictator.” It is hard to imagine that any other American president would have said such a thing.