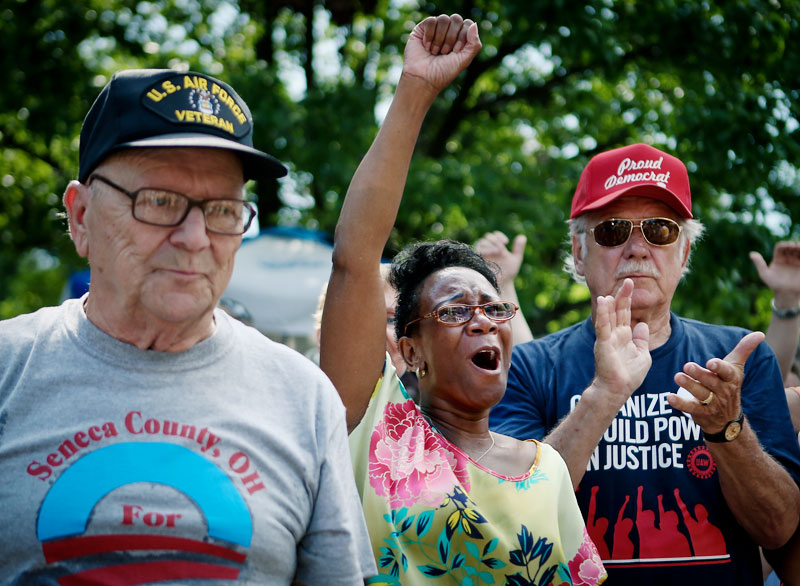 Whose Election Is This Anyway?

It’s not about Obama or Romney. It’s about us.

Without Occupy, without women, without the young, no progress would have been made. And it is these forces that the Right is working to defeat.

Something strange is occurring in America. While right-wing Republicans—oligarchs and dirt-poor fundamentalists alike—are marshalling money and troops for the coming presidential elections, progressives seem stuck in some kind of existential dilemma. Not only does the latest Washington Post poll show Republican enthusiasm for the election outpacing Democratic, at a recent dinner of long-time progressive women activists, I heard it argued that the re-election of Obama really wasn’t that important and perhaps it would be better if Romney won—so that a target of Republican ire would be removed from debate about the real issues. On Sunday, as usual, I listened on NPR to the tirades of Tavis Smiley and Cornel West, who spend more time fulminating about what Obama hasn’t done than focusing on an intransigent and reactionary Republican congressional bloc. And when fundraising among folks who contributed time and money in the last election, I am too often met with, “I think I’ll sit this one out.”

These facts and comments are disturbing both because they portend poor outcomes for Obama and because they indicate a fundamental misunderstanding of what this election is about.

While on the surface the election—like all elections—is a contest between Romney and Obama, in fact this election, as in 2008, is not about “them” but about us—what we fought for, what we’ve gained and what we stand to win or lose.

Obama ascended to the presidency on the aspirations, energy and efforts of millions of women, minorities, peace advocates and labor activists, who saw in an Obama victory the hope for a completion of the unrealized promise of America. Coming from the anti-war movement, environmental action groups, students, unions, churches, synagogues, mosques and our homes, we coalesced around the Obama presidential effort and built one of the most extraordinary grassroots electoral campaigns in U.S. history.

And it is this movement, its agenda—as well as the man—that the Right has worked to impede and disempower from the very first moment.

While the Right’s pundits distract the nation by bashing Obama and belittling every one of his accomplishments, their financers and strategists have worked feverishly—both in Congress and, as importantly, in the states—to thwart the agenda and the movement.

In 2011 alone, more than 1,100 bills related to reproductive rights were introduced in state legislatures, and 92 laws restricting abortion access were passed in 24 states. Eighteen states enacted legislation restricting the right of workers to unionize. Working people are now not only faced with off-shoring but also with “off-stating”: corporations moving jobs to states with more “business-friendly” policies.

And most tellingly, under the subterfuge of “preventing voter fraud,” this year alone 38 states have introduced legislation to restrict voting rights and 14 states have passed such laws—all aimed at minorities, seniors and the young.
Progressives, on the other hand, have waited on the sidelines (with the exception of the battle of Wisconsin), mostly watching to see what the president did and how he fared—as if the issues, struggles and victories were not ours.

Although our reticence is certainly the result of many things—high unemployment, the disconnection of the Administration with the grass roots movement that brought Obama to the White House—I believe that the sense of disengagement and disappointment is an indication of the success that Karl Rove and other Republican strategists have had in infecting our thinking.

Each day the Right’s pundits, from Ann Coulter to Rush Limbaugh to the entire Fox News lineup, spend countless hours not only pooh-poohing Obama but also telling the nation that we were fools to believe in “hope and change.” With an incessant drumbeat of negativity, they insist that Obama is a fraud, that nothing has changed, nor can it, nor should it ever.

And we have been lulled into complacency. When, for the first time ever, a national healthcare law was passed that provided critical benefits for young people, women and those with “pre-existing conditions,” we let the pundits lament what we didn’t get rather than celebrate what we did.

When investment in the auto industry actually worked and saved millions of jobs, we said little to laud it. When the stimulus bill yielded billions of dollars and jobs for our cities, we did little to press for its continuation.

When the Republican attempt to impose a “balanced budget” was defeated (in great part thanks to the Occupy movement), we greeted it with a yawn, although the victory was one of the clearest indications of our power and influence.

When the last troops left Iraq, we let the Right define the moment as a loss for the United States rather than the culmination of the anti-war movement’s eight-year campaign for withdrawal and the president’s making good on his commitment.

These were not only serious mistakes, but indicators of how much we have been affected by the narrative of those who would destroy both the man and the movement.

History is made by those who claim it, and we have let the Right write the history of these past four years—to our detriment and our peril. Every victory that has been won these past years is a reflection of the forces that were in play in 2008. Without Occupy, without women, without the young, no progress would have been made. And it is these forces that the Right is working—through their mantras, through the media and through state laws—to defeat.

Our dissatisfaction with the slow pace of progress plays straight into Republican hands. The message from a well-financed opposition echoes in our ears: that hope is an illusion and change is not possible.

The truth is that hope is essential. The tension between what is and what should be has always been the springboard for real change. What we do matters. The choices are ours. We need to make the right ones.