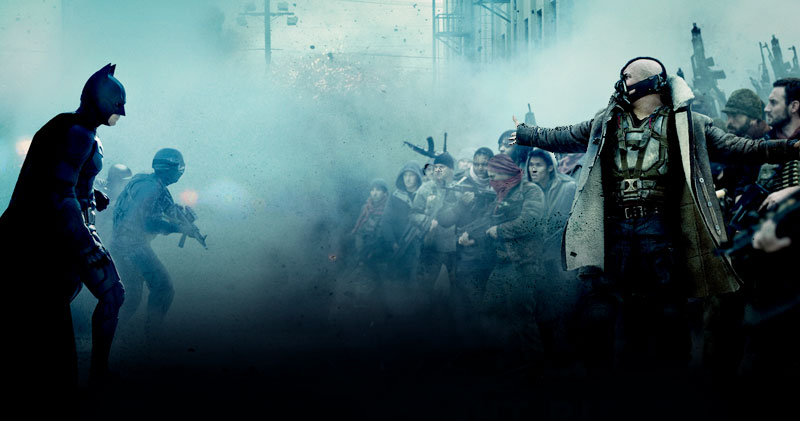 The Dark Knight Rises, as do other indicators of cultural dysfunction.

There Will Be Blood … and Movies

The evolution of our interaction with film

The mass homicide in an Aurora, Colo., movie theater this July had a predictable arc in the media voicebox. Fervently ricocheting, on TV and online, opinionators tried to one-up each other about What’s Really Wrong with, well, just about everything.

That the arguments settled on the matter of assault munitions being as easily purchasable as tennis balls is both inevitable and proper.

But other cultural factors are entangled with James Holmes’ pathologies, including, obviously, movies. The discussion about the shooting’s relationship with violent films and The Dark Knight Rises appeared immediately and was quickly vanquished. Critics, editors and columnists barked en masse—don’t blame the movie!—as if their very industries depended upon it. Which they do, to some degree. And, yes, the vast majority of ticket-buyers for The Dark Knight Rises did not, in fact, hurt anyone.

But so? Amid the dread of having a cause-and-effect line drawn between viewership and berserk action, one reality has been overlooked: Our mass entertainment culture has changed, and we have changed with it. In her new book In Broad Daylight: Movies and Spectators After the Cinema (Verso), Gabriele Pedullà, an Italian professor of literature, builds a cogent and alarming argument about how much change we’re talking about. Pedullà’s concern is with how we watch cinema, and the ways cinema was and is produced to accommodate that process.

In the beginning, movies shared space in vaudeville houses with all manner of ephemeral entertainment, plus drinking, eating and conversation, and so the earliest films are brief, simple, purely sensational. Eventually, by the mid-teens, the “black box” of dedicated movie theaters established film, like classical theater, as something we partake in conscientiously, with patience and silence, in similarly reverent company, and with interference from the outside world reduced to nil. Cinema-going was a kind of willful hostage status, and helplessness was an integral part of the dynamic. After all, we cannot stop or alter a publicly projected movie. “We can care about Ophelia or Juliet,” Pedullà writes. “But we will never be able to save them.”

That’s how narrative art works. But with today’s proliferation of TV channel surfing, Internet connectivity, smart-phone convenience and so on, we are no longer paralyzed, and our control over what we see and how long we see it means the connectedness we once had to the dramatic experience, and what it means, is dissipating, dissolving.

The movies everyone sees today—“blockbusters,” now a genre unto itself—are fragmented, frantic, deafeningly loud, clogged with CGI (computer-generated imagery), and, significantly, always committed to resolving their narrative problems with protracted, consequence-free violence (which eats up 30 to 50 percent of their running time). No empathy is required, just awe. More often than not they’re consumed on personal screens, where the priority is to sustain a constant cataract of sensation, lest we change the channel or hit fast-forward.

Films have also gotten—predictably—stupider, more preadolescent in their reflexes, more atavistic. Violence per se is not the issue, if it is realistic violence that reflects cost and pain and matters to the story. Instead we have acres of gargantuan, city-destroying violence that has all the conviction of a cartoon “KA-Pow!” Multiply this principle by dozens of movies and hundreds of millions of viewings over 25 years, and you have the degree to which this dynamic has overshadowed all other forms of moviewatching. Then add in the rise of first-person-shooter games (sales in the hundreds of millions), the decline in reading actual books, and a new generation that doesn’t know any other cultural life.

We don’t need less “violence,” we need smarter, more substantive movies. But it can be no surprise that with all of that brutish input, outputs like Holmes would begin appearing. What happened in Aurora—not a John Hinckley one-off but a preplanned and deliberate act of armed engagement with the movie and its audience—is a first in the 117-year history of cinema.

The least we can do is wonder, why is it happening now?