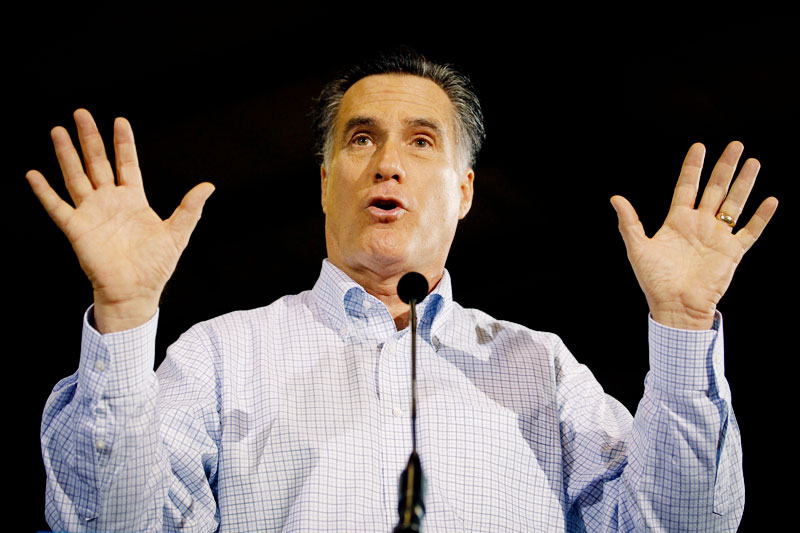 How did Mitt Romney 'retroactively retire'? Is he paranormally gifted? (Photo by Chip Somodevilla/Getty Images)

GOP Time Travelers and Other Hucksters

The misguided semantics paving the way to November’s election

As the rough beast known as the 2012 presidential campaign slouches toward the candidate-coronation phase of things at the end of August, it’s also entered the high-baroque phase of language manipulation.

In July, Romney campaign hands deftly altered the video of a campaign speech about the economy by President Obama in Roanoke, Va., making it sound as though the president denies the role of individual human agency in determining the fate of any small business. “If you’ve got a business, you didn’t build that,” our perversely anti-free-enterprise leader is heard peremptorily announcing—minus the bit of anodyne rhetoric that led into that remark, which the attack-ad impresarios pointedly edited out: “There are a whole bunch of hardworking people out there. If you were successful, somebody along the line gave you some help. There
was a great teacher somewhere in your life. Somebody helped to create this unbelievable American system that we have that allowed you to thrive. Somebody invested in roads and bridges.”

Voters can be forgiven for seeing something less than the soul of the Republic at stake in these matters—and yet, when you pan back from the trench warfare of the editing console, there’s very little else on offer for the electorate to hang on to. The Romney spot, after all, followed former Republican National Committee head Ed Gillespie’s attempt to dispel media reports that Romney had in fact misrepresented the length of his tenure in command of Bain Capital so as to decouple it from the most damaging run of Bain-orchestrated outsourcing in the early aughts. Gillespie’s ingenious, time-bending claim was that the presumptive GOP nominee had “retroactively retired” as Bain CEO—evidently he climbed into Doc’s DeLorean and gunned it with a lightning-bolt charge.

Just a few days after the Gillespie misfire, yet another Romney surrogate, John Sununu, told reporters that he wished Obama would “learn how to be an American”—an unsightly lurch into McCarthy-era insinuations about a political opponent’s shadowy origins and deficient love of country. Sununu was later forced to “clarify” his remarks, but the point was made: The nation’s first African-American president was something shy of truly “American.”

Yet these are lower-order distortions of words and their putative meanings. Indeed, we exist in a Wonderland, in the Lewis Carroll sense, where conservatives descry “class warfare” in any threatened marginal increase in taxes and vigilantly warn against an “epidemic” of voter fraud, when the number of verified cases is smaller than the number of people killed by lightning strikes. The Obama team, too, has indulged in linguistic fancies, most famously with the misleading tallies of the jobs “created or saved” under the 2009 stimulus law—a category that the Office of Management and Budget was forced to retire on the grounds that it made little sense. And to get around legal strictures against the assassination of U.S. citizens, the White House has introduced “targeted killing” into the sprawling lexicon of national-security euphemisms.

There is certainly nothing new in the rote political debasement of words and their meaning. George Orwell famously anatomized the whole ugly process in his 1946 essay “Politics and the English Language.” What has shifted, however, is the way that such deliberately non-signifying expressions now actively shape the making of policy.

While meeting with a group of historians in 2011, Obama asked them to spell out just how he could address the subject of spiraling inequality without inviting the “class warfare” line of attack. The obvious response here is to tell the world’s most powerful man to stop whining—to affirm plainly that the presidency is committed to serving the interests of the ordinary working Americans dispossessed by the predations of the American oligarchy. The great architect of the modern Democratic consensus Franklin Roosevelt did just that in 1936, by affirming that the nation’s banking and investment interests were “unanimous in their hatred for me—and I welcome their hatred.” But that is plain talk from a chapter in our national politics that now seems scarcely imaginable. Don’t look for it to be retroactively unretired any time soon.