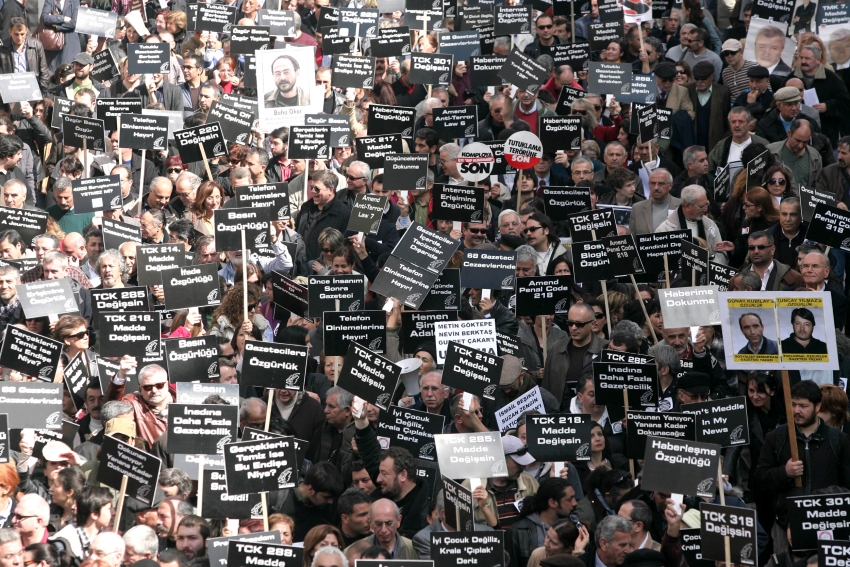 In 2011, journalists and activists rallied in the streets of Ankara to demand greater freedom of the press. (Adem Altan/AFP/Getty Images)

Freedom of the Press Remains Elusive in Turkey

Though the government denies targeting journalists, more than 90 Turkish journalists have spent most of the last year behind bars

ISTANBUL—Necati Abay is not afraid to speak his mind.

“If I were afraid, I would not be talking to you,” he says, after listing all the woes he and other Turkish journalists have faced.

But he is cautious, and for good reasons.

“There are many innocent people in prisons,” says Abay, sitting in a café in Istanbul’s Kadikoy section, looking like an anonymous small businessman with a heap of things to do on his mind.

He is busy, indeed.

A leftist journalist, who has seen his share of prisons, Abay, 56, is the spokesman for the Platform for Solidarity with Arrested Journalists. It’s a tiny organization with no funds but the enormous goal of keeping Turks informed on the fate of what journalists say is the record number of their ranks in prison. By journalists’ count, more than 90 journalists have been in prison for most of the last year—many in high security prisons’ isolation cells. And nearly all are there for nothing more than their reporting, says Abay.

Turkish officials strongly deny what they consider “the myth” of imprisoned journalists. They say the journalists either committed crimes or were carrying out propaganda on behalf of outlawed organizations. They have rejected criticism from groups like the Committee to Protect Journalists and Reporters Without Borders, which have condemned the attacks on freedom of expression in Turkey.

Yet the government has sought to blunt criticism from European human rights groups by changing some practices and vowing to carry out legal reforms. Turkey has long waited to join the European Community and the criticism is one obstacle to that.

Frustrated by their colleague’s treatment, many Turkish journalists are cynical, however, about the government’s promises.

The majority of journalists in prison or facing trials work for the news media that serves the large Kurdish minority. There's a small of number of leftists and a few from the mainstream news media, who are also in prison or have been released and face trials.

“Turkey’s overbroad definition of terrorism still allows for arbitrary imposition of the harshest terrorism charges against individuals about whom there is little evidence of logical or material support for terrorism or of involvement in plotting violent activities,” Human Rights Watch noted in a recent report.

Since Abay helped form the organization several years ago, out of frustration from the lack of support for journalists, Abay has honed to the same theme.

“In Turkey there is no press freedom,” he says with a furious wave of his hand. “Before they used to kill journalists, now they put them in prison.”

His group sends out cards to the journalists, helps coordinate visits, keeps up a website and seeks any chance to speak up. He claims journalists suffer greatly from psychological torture and deprivation in the prisons.

Nobody has died while in prison but at least one journalist lost his wife, according to Turkish journalist organizations. Another journalist, facing serious emotional and physical problems, was recently released awaiting trial.

The reality that Abay tries to publicize is one that he too might face soon.

That is because of an 18-year prison term that is hanging over his head.

He was arrested in 2003 amid a series of bombings in Istanbul, but released and then rearrested on charges of belonging to an illegal underground organization. The case dragged on for years until a court in 2011 gave him the 18-year prison term, which he is appealing.  He has a court date in September.

He has already paid a heavy price, as he sees it, for his writings and thoughts.

He was given an eight-and-a-half-year prison term in the 1980s for promoting Communist propaganda. But he served only 20 months.

He was arrested again with six others in February 1997 on charges of belonging to an illegal armed organization. The group claimed they had suffered the kind of torture once described by human rights groups as rampant in Turkey. They said they had been blindfolded, forced to stand or sit for long periods, deprived of sleep, beaten, stripped and forced to lie in cold water, according to the case they brought to the European Court of Human Rights. The two women in the group said they were sexually harassed.

A prosecutor filed charges against eight police officers for the torture allegedly carried out against the group. But nothing ever came of the charges as the case dragged out in the courts. Abay was held for eight months, released and, along with the others, began a long legal battle over their treatment by security officials.

Thirteen years after their arrests, the European Court of Human Rights ruled in favor of six arrestees and ordered Turkey to pay €34,200 to each. One of the arrested, who had been arrested again, later died in police custody. The Court ruled against Turkey in favor of his survivors.

As he waits now for the appeal’s courts ruling, Abay has scraped together some editorial work. “It’s difficult, but we can get by.”

He has no doubt that he is innocent and repeatedly insists that the prosecutor has nothing against him.

“They are punishing me for my thoughts. There’s no evidence. Nothing.”