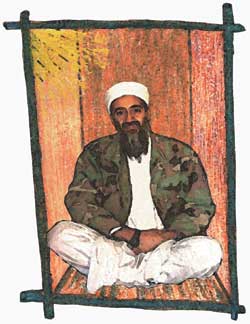 BY Naomi Klein
Share TweetReddit0 EmailPrint
Since the release of The Video, Osama bin Laden’s every gesture, chuckle and word has been dissected. But with all the attention on bin Laden, his co-star in the video, identified in the official transcript only as “Shaykh,” has received little scrutiny. Too bad, since no matter who he is (he is most commonly identified as the mujahedin Khaled al-Harbi), Saudi he offers a rare window into the psychology of men who think of mass murder as a great game.

A theme that comes up repeatedly in bin Laden’s guest’s monologues is the idea that they are living in times as grand as those described in the Quran. This war, he observes, is like “in the days of the prophet Muhammad. Exactly like what’s happening right now.” He goes on to say “it will be similar to the early days of Al-Mujahedeen and Al-Ansar (similar to the early days of Islam).” And just in case we didn’t get the picture: “It is the same, like the old days, such as Abu Bakr an Othman and Ali and others. In these days, in our times.”

It’s easy to chalk up this nostalgia to the usual theory about bin Laden’s followers being stuck in the Middle Ages. But the comments seem to reflect something more. Bin Laden doesn’t long for some ascetic medieval lifestyle, but the idea of living in mythic times—when men were godlike, battles were epic and history was spelled with a capital H. “Screw you, Francis Fukuyama,” he seems to be saying, “History hasn’t ended yet. We are making it, right here, right now!”

We’ve heard this idea from many quarters since September 11, a return of the great narrative: chosen men, evil empires, master plans and great battles. All are ferociously back in style. The Bible, the Quran, The Clash of Civilizations, Lord of the Rings—all of them suddenly playing out “in these days, in our times.”

This grand redemption narrative is our most persistent myth, and it has a dangerous flip-side. When a few men decide to live their myths, to be larger than life, it can’t help but have an impact on all the lives that unfold in regular sizes. People suddenly look insignificant by comparison, easy to sacrifice in the name of some greater purpose.

When the Berlin Wall fell, it was supposed to have buried this epic narrative in its rubble. This was capitalism’s decisive victory. Ideology is dead—let’s go shopping. The end-of-history theory was understandably infuriating to those whose sweeping ideas lost the gladiatorial battles, whether it was global communism, or, in bin Laden’s case, an imperialist version of Islam. What is becoming clear post-September 11, however, is that history’s end also turned out to be a hollow victory for the U.S. cold warriors. Since 1989, many of them have missed their epic narrative as if it were a lost limb. Without ideology, shopping was just shopping.

During the Cold War, consumption in America wasn’t only about personal gratification; it was the economic front of the great battle. shopping, they were participating in the lifestyle that the Commies supposedly wanted to crush. When kaleidoscopic outlet malls were contrasted with Moscow’s gray and barren shops, the point wasn’t just that we in the West had easy access to Levi’s 501s. In this narrative, our malls stood for freedom and democracy, while their empty shelves were metaphors for control and repression.

But when this ideological backdrop was yanked away, the grander meaning behind the shopping evaporated. The response from the corporate world was “lifestyle branding”: an attempt to restore consumerism as a philosophical or political pursuit by selling powerful ideas instead of mere products. Ad campaigns began equating Benetton sweaters with fighting racism, Ikea furniture with democracy and computers with revolution.

But post-September 11, History is back. Shoppers are once again foot soldiers in a battle between good and evil, wearing new stars-and-stripes bras by Elita and popping special-edition red, white and blue M&Ms. When U.S. politicians urge their citizens to fight terrorism by shopping, it is about more than feeding an ailing economy. It’s about once again wrapping the day-to-day in the mythic, just in time for Christmas.