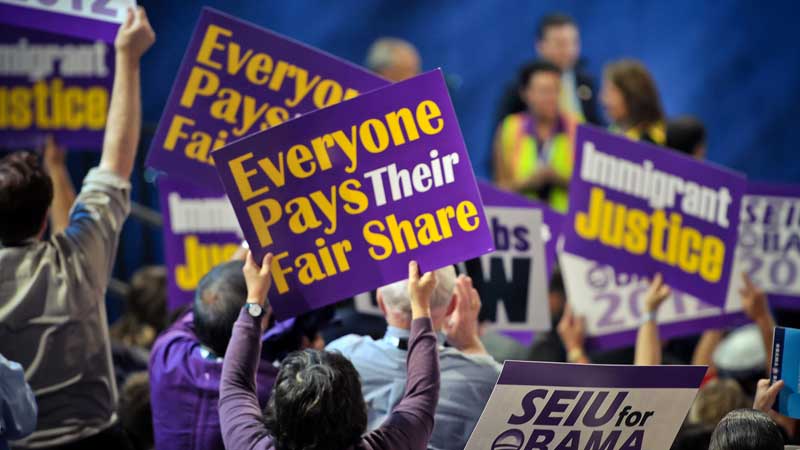 Delegates wave signs at the DNC on September 4. (Photo by Mladen Antonov/AFP/Getty Images)

Democrats have scored political points on Romney’s wealth in tax havens and Bain’s frequent destruction of American jobs, but they have so far failed to make class issues central to the election debate.

As the closely contested presidential race enters the home stretch, both campaigns are trying to sway the few undecided voters and boost key, if uncertain, bases of support: white retirees or working class men for Mitt Romney, women and better-educated voters for Barack Obama.
The contest may hinge on the success of such narrow appeals, but, jousting aside, the core issues at stake in this election involve questions of class. Driven for decades by rich donors, big corporations and “movement conservatives” (like the Tea Partiers), the Republican Party has increasingly committed itself to an extreme anti-government, raw capitalist ideology. In reaction against Obama’s moderate liberalism—a return to pre-Bush tax rates for the rich and modest regulations of an out-of-control financial sector—Republicans want to consolidate the power of rich individuals and corporations while escalating the redistribution of wealth from the 99% to the 1%.
All elections revolve around class interests, but some—like Franklin Roosevelt’s Depression-era victories—do so more than others. In contrast, in the 1950s and 1960s, many big corporations and the mainstream of the Republican Party (but not Goldwater) grudgingly acquiesced to the New Deal legacy, making the elections less about class than about the Cold War, race and how much to expand the New Deal.
By the early 1970s, corporations—complemented by rich right-wing ideologues—began to organize in a more class-conscious way against the threat to their profits posed by unions and the movements of the ’60s. They built think tanks, lobbying operations and media organizations to advance both short-term policy goals and, in the long run, to politically “roll back the 20th century,” in the words of journalist William Greider. The conservative movement focused on the Republicans, but corporations and their PACs donated as well to Democrats, buying access and ultimately influencing policy.
Reagan’s 1980 election marked a turning point, with his overt anti-union actions (breaking the air traffic controllers strike) and his declaration that government is the problem, not the solution. Since then, forces such as Americans for Tax Reform, the Club for Growth and the Tea Party have pushed Republican candidates ever rightward. The party’s goal became cutting taxes and government without any regard to fiscal caution. Between 2000 and 2008, during what the Pew Research Center recently described as “the lost decade of the middle class,” the Republican agenda favoring the rich reached its apex with George W. Bush’s deregulation and tax-slashing that led to slow job growth, record inequality and financial collapse.
Despite that failure, Romney supports an intensification of the class war that Bush waged. Pro-Obama Super PAC strategist Paul Begala described the vice-presidential choice of Paul Ryan, long a strident advocate of cutting or privatizing most federal social programs, as “going nuclear” on class.
Jane Mayer reports in The New Yorker that rich donors who heavily backed Obama in 2008, especially those in the financial sector, have shifted to Romney. And they will get a return on their investment should the Republicans enact their agenda, which includes cutting income tax rates for individuals to 20 percent below Bush-era rates, and by reducing or eliminating taxes on corporations, large inherited estates and investments. Contrary to his deficit hawk image, Romney did not explain how he would “broaden the tax base” to pay for a projected revenue shortfall of $5 trillion to $7 trillion over a decade caused by these and other proposals—which include spending more on defense while “protecting” Social Security. As it stands, one of four things would happen:

Households with incomes under $200,000 would pay significantly higher taxes.

Government would deeply slash investment on such long-term needs as education, research and infrastructure.

All of the above.

In short, Romney and the Republicans would fundamentally reshape government to reduce, eliminate or privatize (and cripple) most programs that redistribute income, however modestly, or provide economic security and opportunity to the 99%. Obama and the Democrats do not have a comparably strong class-oriented counterstrategy to expand the role of government for long-term growth, equality, opportunity and security. But Obama will at least defend public programs for social welfare, from economic security to healthcare (which he greatly expanded). He also favors more progressive taxation and supports regulation of corporations and the financial services industry. He sticks by the argument that public investment is central to private business success.
Democrats have scored political points on Romney’s wealth in tax havens and Bain’s frequent destruction of American jobs, but they have so far failed to make class issues central to the election debate. Romney—who did not endear himself with workers when he explained how much he likes to fire people—is vulnerable on this issue. An August NBC/Wall Street Journal poll found that Romney’s tax returns and Bain Capital’s past made registered voters view him more negatively. According to an ABC/Washington Post poll, by a 58 to 32 margin, registered voters see Romney as favoring the rich over the middle class. And registered voters resoundingly reject Romney’s plan for turning Medicare into a voucher program.
Yet support for Obama does not follow class lines. Overwhelmingly, African-Americans and Latinos, who are disproportionately working class, say they will vote for Obama. But in the NBC poll, only 34 percent of white registered voters without a college degree say they will vote for Obama, which would be—if it holds—the lowest percentage for that group of voters for a Democratic presidential candidate since George McGovern’s 1972 loss.
Those white working-class voters would personally benefit from a more progressive tax system, more support for education and protection of the Social Security system. And should Obama lose because many white working-class voters failed to cast ballots in their own interests, it would raise the urgent question of why the Democrats have failed to make their case to the white working class, especially when polls on issues show strong majorities open to a progressive economic message that is relevant to their lives. It’s not too late for Obama, even now, especially against Romney and Ryan, the candidates of the 1%.