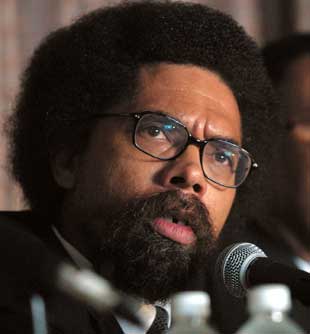 Cornel West may be America’s best-known public intellectual. He’s a professor of religion at Princeton University, where he has taught since a very public exit from Harvard in 2002. He is the author and co-author of several books, including Democracy Matters, his most recent, which is a sequel to his 1993 Race Matters, which won the American Book Award.

It’s not likely that West’s book would change the mind of anyone already committed to the reelection of President George W. Bush. But its appearance at this time provides yet another indictment of the administration’s foreign and domestic policies. West argues that American democracy is being distorted in the Bush era by three dominating dogmas: free-market fundamentalism, aggressive militarism and escalating authoritarianism.

Although many of his works are aimed at popular audience, West has published a host of scholarly texts, including Prophetic Fragments, The American Evasion of Philosophy and Post-Analytic Philosophy. While he is a prolific academic, that’s not the reason for his wide appeal. He’s appeared in two of the three Matrix films and created two spoken-word CDs: Sketches of My Culture and the two-CD set Street Knowledge. West’s Harvard classes were so popular, he sometimes had to take them off campus to find a large enough venue.

Students, just like audiences at his public performances, no doubt are dazzled by West’s torrents of words and thematic virtuosity. He crosses boundaries of discipline and genre to link disparate notions, dropping names and eccentric references as he riffs.

During a West performance, you’re likely to hear names like Soren Kierkegaard and KRS-One mentioned in the same sentence. I wouldn’t be surprised if he found some way to link jazz saxophonist John Coltrane’s “Naima” solo to some forgotten rhetorical flourish of Benjamin Franklin or to some passage in a novel by Ralph Waldo Emerson or James Baldwin. West regularly limns Western cultural history for unlikely juxtapositions. No allusion is too far-flung.

In Democracy Matters, for example, West cites characters in Plato’s Republic and Fyodor Dostoyevsky’s The Brothers Kararmazov to illustrate some of “deadening nihilisms” he says are suffocating the “deep democratic energies” in America today. He goes to the novels of Herman Melville for what he calls “an unprecedented and unmatched meditation on the imperialist and racist impediments to democracy in American life.”

West also believes the musical genre of the blues is a philosophical lodestone for successful democracy. The blues aesthetic placed stress “on dialogue, resistance and hope,” which, he writes, “is the very lifeblood for a vital democratic citizenry.” For West, novelist Toni Morrison’s “magisterial corpus” best exemplifies this blues aesthetic.

“Morrison’s fundamental democratic insight,” he writes, “is that there can be democratic dialogue only when one is open to the humanity of individuals and to the intensity of their personalities.”

Democracy Matters also includes a very well-argued chapter on the conflict in the Middle East and the overarching problem of Muslims and Jews. He makes common cause with progressive Jews as he excoriates the policies of Israeli Prime Minister Ariel Sharon. He urges a more complex understanding of Islam, but forthrightly condemns “Islamic fundamentalist gangsters” and “the anti-Semitism of autocratic Islamic states.”

Critics often cite his wide-ranging concerns as proof of their charge he is miles wide and inches deep, favoring style over substance. And, to be frank, West gives these critics plenty of ammunition.

There is something excessive about him. He chronically overdresses. He is verbose, occasionally even grandiloquent. His histrionic oratorical style sometimes distracts from his message. At times his eclectic “multicontextualism” periodically veers into a maze of incoherence. That seeming incoherence is what prompted the dust-up between him and Lawrence H. Summers, then the newly installed president of Harvard.

Although West authored more than 10 books and is heavily cited in scholarly references, Summers questioned his commitment to Harvard-caliber scholarship. At the time West was a part of Harvard’s vaunted dream team of Black Studies stars, assembled by Henry Louis Gates Jr. Summers’ behavior insulted West and he bounced to Princeton, where he had taught before joining Gates’ team.

“Weaving a web of interconnections between the academy, mass media, prisons, churches and the streets … did not fit into the narrow field of his technocratic vision,” he writes explaining his exit.

Those interconnections are laudable and make him the very definition of a public intellectual. But sometimes those connections get clogged: This imaginative aesthetic can render him politically inconsequential—as in 2000 when he backed Ralph Nader over Al Gore.

But that obdurate romanticism just might be the price we have to pay for West’s manifest brilliance.