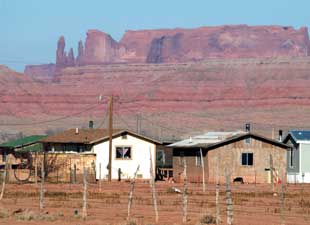 The open lands of the Navajo Nation play host to a rising number of clandestine meth labs.

A Navajo town deals with the ravages of the latest addictive drug, crystal meth.

Dr. Thomas Drouhard remembers the first time he stared the drug dead in its eye five years ago.

He was on duty at the only hospital in Tuba City, Arizona, a dusty town of some 9,000 deep inside the Navajo reservation, when a woman was rushed into the emergency room with nine stab wounds to the chest.

“I’d never seen anything like it,” says Drouhard, a warm, easygoing man who has worked as a surgeon on Navajo land for nearly three decades. “Looking back on that level of violence, I now know exactly what it was.”

Meth, a highly addictive white powder made from over-the-counter ingredients like iodine, Drano and ephedrine, gives users a rush that can last eight hours. According to the National Institute on Drug Abuse, it also causes a propensity toward psychotic behavior.

It was the effects of crystal methamphetamine that began wreaking havoc on rural, overwhelmingly white Midwest towns in the early ’90s. Between 1995 and 2002, meth-related emergency room visits nationwide jumped 54 percent, according to the U.S. Department of Health and Human Services, and cities from New York to San Francisco all have experienced recent outbreaks.

Tuba City might be getting it worse. There were 14 meth-related deaths here last year, a staggering number for a town this size. A local health department study found that 12 percent of Tuba’s teens were using meth, as were 17 percent of residents between the age of 27 and 45. A third of the patients screened at the emergency room now test positive for the drug.

Among the reasons the drug has hit the area so hard, local police say, is that the reservation’s vast frontier lends itself to the clandestine labs used to produce meth (the Navajo Nation is about the size of West Virginia). It’s also cheap—a quarter of a gram, enough to get a person high for a few days, runs $20 to $40.

Further, crystal meth is not yet prohibited under Navajo law, preventing law enforcement from prosecuting cases in tribal court, which has jurisdiction over most crimes on tribal lands. This forces Navajo police to trek 79 miles to Flagstaff to arraign meth suspects in federal court.

Compounding all of this, the Navajo long have been vulnerable to addiction—almost one quarter of the reservation’s 190,000 residents are unemployed and the rate of alcoholism is six times that of the entire United States.

Levon Hatathlie, a drug and alcohol counselor for the Tuba City Department of Behavioral Health Sciences, says she rarely saw anyone on meth until two years ago. Now, Hatathlie works with 13 users. Most are young adults, but a 15-year-old recently walked into her office. “It was shocking,” she said.

With meth use becoming so widespread, the drug has caught the eye of a FBI task force in Flagstaff, working violent crimes on the western half of Navajo land as part of a cooperative agreement with the Navajo tribal government.

Though actual numbers are hard to come by, the rate of violence is greater than ever, says Agent McDonald Rominger.

“Instead of just one violent act, which is what we see with alcohol, it becomes five random acts of violence when someone is on a meth run,” Rominger said.

Greg Adair, a Navajo police investigator in Tuba City, says meth-induced crimes like that of a 24-year-old Navajo man stabbed 21 times last year—both he and his assailant were thought to be on meth—are of a brutality rarely seen before in Tuba City. Recent signs indicate meth-related crimes are worsening. On September 24, for instance, Navajo police seized 5 pounds of meth from a car pulled over outside Tuba City. Three days later, an 18-month-old baby was found dead near Tuba City. His parents were high on meth and had abandoned him.

FBI Agent Nick Manns, who works the eastern half of the Navajo reservation 240 miles from Tuba City, says that 40 percent of the crimes he now deals with are meth-related.

But because of the oversight in tribal law, arresting someone for possessing meth on Navajo land is difficult.

Last year, the U.S. Attorney’s office in Flagstaff agreed to let police bring meth suspects arrested on Navajo land to federal court, even though the federal system is typically designed for larger interstate drug trafficking cases. Since then, Navajo police, working with the FBI, have brought 16 meth cases to Flagstaff, but law enforcement officials say the numbers would be far higher if they could move meth cases through the considerably less burdened tribal court system.

Deanna Jackson, spokeswoman for Navajo Nation President Joe Shirley, says a Navajo law prohibiting meth on tribal land is coming soon. “President Shirley is working towards drafting legislation we hope will be introduced during the next legislative session in October.”

“We’re trying to improve the wellness of this community from a native perspective by including entire Navajo families and also Navajo spiritual philosophies in our outreach,” Archuleta said.

Such localized efforts are clearly having an impact: There were only three meth-related deaths this year, although the drug now is spreading beyond Tuba City disturbingly fast.

And the losses remain painfully personal. Yvonne Hoosava, a secretary in the Tuba City Regional Health Care Corporation and lieutenant governor of the Upper Village of Moenkopi, a nearby town on the Hopi reservation, cries quietly when discussing her meth-addicted son.

“If you’ve seen the movie The Exorcist, that’s exactly how he sounded,” Hoosava said as she talked of the meth binge her son went on last year. “It was like the devil was talking.”

Dennis Bowen, a counselor at Tuba City’s alternative high school, has faith that these new demons can be combated using cultural ties. By reinforcing Navajo culture in some and introducing it to others, Bowen is hoping to reaffirm an identity that he believes is strong enough to overcome the meth problem.

“We have protective factors that other places don’t—our elders, our language, our traditions,” Bowen said. “And because of who we are, we have the potential to get this thing under control. … We’re not helpless.”

Dan Frosch is an award-winning journalist based in New York whose work has appeared in the Los Angeles Times, The Source and the Santa Fe Reporter.