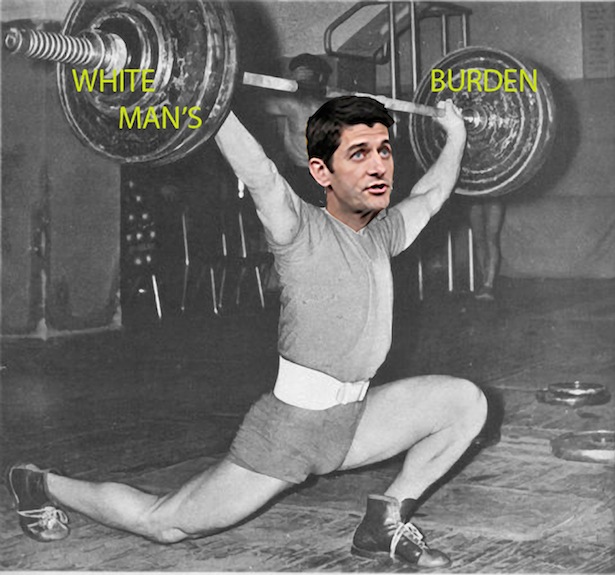 The real news isn’t Paul Ryan cutting off an interview; it’s the racist comment he made just before.

Ryan volunteered the phrase "inner cities" out of nowhere, except his own preconceptions about the link between violent crime and inner cities—i.e. where poor blacks and Latinos live.

Internet pundits made hay today over a clip released by BuzzFeed that shows a “testy” Republican vice presidential candidate Paul Ryan aborting an interview segment with Michigan’s ABC12 News. The Ryan campaign sought to short-circuit the criticism by saying Ryan made an appropriate response to a “weird question” by the local ABC reporter.

But what Paul Ryan said before that termination makes weird look like a virtue. Ryan’s comments about solving inner-city problems were unabashedly racist.

The answer is a textbook “pivot”– a technique candidates use to slip by the actual question in order to choose a controlled response that is on message.

But in expanding on his pivot, Ryan jumped mouth first into a briar patch of racist stereotypes. After saying the United States has “good, strong gun laws” that just need better enforcement, Ryan defined the source of violent crime problem and offered his solution:

Nobody calls Park Avenue, Hyde Park or Rodeo Drive the “inner city.” And even though Sarah Jessica Parker and Donald Trump live in urban centers, no one refers to her West Village brownstone or his gilded penthouse as inner-city digs.

“Inner city” is code for impoverished black and Latino urban neighborhoods; inner city is a euphemism for ghetto.

Nor did anyone ask Ryan about inner cities in the interview segment posted on BuzzFeed. Ryan volunteered the phrase out of nowhere, except his own preconceptions about the link between violent crime and inner cities—i.e. where poor blacks and Latinos live. He proposed alleviating their poverty and preventing crime by helping teach inner-city people good discipline and character. For, according to Ryan, that is what constitutes “civil society.” As for the roles of education, health care, jobs, veterans’ benefits, child care and decent food? Shucks, the “best thing” is to just leave it to charities, civic groups and churches to teach those inner city people to control their urges.

Until then, hide the white womenfolk and the good silver from the inner-city denizens, who lack the “discipline” to resist violent crimes or the “good character” to get out of poverty.

Oh, I’m sorry. Were we talking about the gun problem?