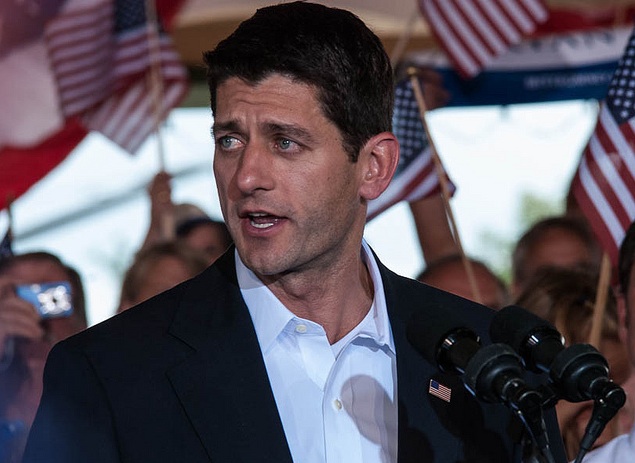 Will Paul Ryan dare again to frame the GM shutdown as a black eye for Obama?

As if guided by the ghostly spirit of his über-capitalist guru Ayn Rand, Paul Ryan has staunchly opposed giving the assistance that would help struggling districts like those in southern Wisconsin.

When Paul Ryan accepted the vice presidential nomination at the Republican National Convention, one line stood out as particularly outrageous. Ryan blamed President Obama for shutting down the General Motors plant in Ryan's hometown of Janesville, Wis.–even though the shutdown was announced seven months before Obama became president.

That may be a trickier lie to pull off in tonight's vice-presidential debate, thanks to Brad Lichtenstein’s documentary As Goes Janesville, which aired on PBS on Monday. The film presents a stark picture of  the 2,800 GM jobs lost and additional 8,000 area workers displaced after the plant shut down in 2008, just before Christmas.

Chillingly, the film interviews local bankers and realtors who lead a local redevelopment group called Rock County 5.0 and cannot conceal their delight at seeing local wages ratcheted down by the permanent loss of 2,800 GM jobs paying $28-$29 an hour. Through the rosy glasses of neoliberalism, they see plant closings as inevitable and even positive–a useful push for communities to redirect public resources to attract corporations rather than to meet increasingly desperate human needs. As Goes Janesville examines a case in which the city council votes to devote $9 million in incentives—20 percent of their budget—to lure just 120 jobs to town.

However, As Goes Janesville itself rosily distorts reality by choosing to focus on two laid-off workers whose fates—based on both local and national data about victims of plant closings—are truly exceptional. One ultimately lands a job at the GM plant in Fort Wayne, Ind. at the same wages, although her family remains behind in Janesville. The other goes through retraining and manages to land a hospital job at 20 percent less pay (a modest cut compared with the plight of most displaced workers) and with good health benefits. Entirely neglected are the thousands of former GM workers who plunged into the local job market only to discover that openings are rare and Janesville-area employers have lowered the average wage from $23.27 in 2007 to $18.82 in 2010.

As Goes Janesville also skips the more complicated fallout from the sudden vaporization of the GM and GM-dependent jobs. As I've reported previously, rates of domestic violence, foreclosure, child abuse and neglect, child poverty and suicide have multipled in the Janesville area.

As if guided by the ghostly spirit of his über-capitalist guru Ayn Rand, Paul Ryan has staunchly opposed giving the assistance that would help struggling districts like those in southern Wisconsin. He has voted against extended unemployment benefits, higher minimum wages, children's health insurance, the Affordable Care Act and foreclosure assistance. Instead, he delivers lectures like, “We don’t want to turn this safety net into a hammock that ends up lulling people in their lives into dependency and complacency.”

Instead of hammocks, Ryan advocates bootstraps, or so one might surmise by the $300,000 in federal earmarks he secured for former GM workers to enter retraining programs. This is a point all of the candidates agree on, with both Romney and Obama advocating that workers sacrifice income to undergo job re-training for a new career.

The problem is, such retraining programs haven't worked–at least not in Janesville, according to a new report by Amy Goldstein of Pro Publica.

Goldstein quotes Robert Borresman, director of the Southwest Wisconsin Workforce Development Commission, as he ruefully surveys the results of his efforts to get displaced workers enrolled in job retraining programs. “Looking back on it, we may have trained too many people, because there weren’t enough jobs,” Borresman said with frustration. “People are experiencing a double whammy. They lost their jobs. They went to school to get skills, and they still can’t get jobs.”

For example, former GM workers Tom and Barb Vaughn both graduated from retraining programs, reports Goldstein. Yet “together, their income is slightly more than what one of them earned before.”

“We’ve probably had $9 million to $10 million in training [subsidies] in this county the past couple years,” said Borresman, exasperated with the ongoing shortage of jobs. “It’s very frustrating, because you find people who took the advice you gave them, and now you are in a situation where I don’t know if their life is necessarily better.”

Given this, is there any hope for Janesville? One possibility could be converting the empty plant to a productive new use, such as building buses or other mass-transit equipment. Unfortunately, As Goes Janesville fails to explore this avenue.

But one revelation by director Brad Lichtenstein truly leaves Ryan without any GM-related stones to throw at the Obama administration–although the revelation did not actually appear in the film. In a recent interview with Milwaukee’s Shepherd Express, Lichtenstein recalled a plan Ryan had for the defunct GM plant: Knock down the huge, modernized factory and turn it into a Superfund site–a hazardous waste site slated by the Environmental Protection Agency for cleanup.

“I remember talking to him one time about what to do with the GM site, that it’s a Superfund site waiting to be declared,” Lichtenstein told Shepherd Express journalist Lisa Kaiser. “And he said that what he’d like to see is for us to be able to obtain it from GM for a dollar—‘us,’ meaning Janesville, the municipal or county government. Then it would be eligible for Superfund dollars, which could trigger the cleanup.”

This plan reveals Ryan as a hypocrite on at least two fronts. First, in his supposed concern for GM workers and others who depend on the GM plant and the promise of manufacturing jobs it still provides. Second, in the sincerity of his attacks on the EPA. As Lichtenstein noted:

So the guy right now who is on the campaign trail talking about how the EPA over-regulates coal and other pollutants and wants to do away with any subsidy programs for wind and solar, and points to [solar panel manufacturer] Solyndra as the reason, is also completely willing to talk about EPA cleanup of the General Motors site in his district.