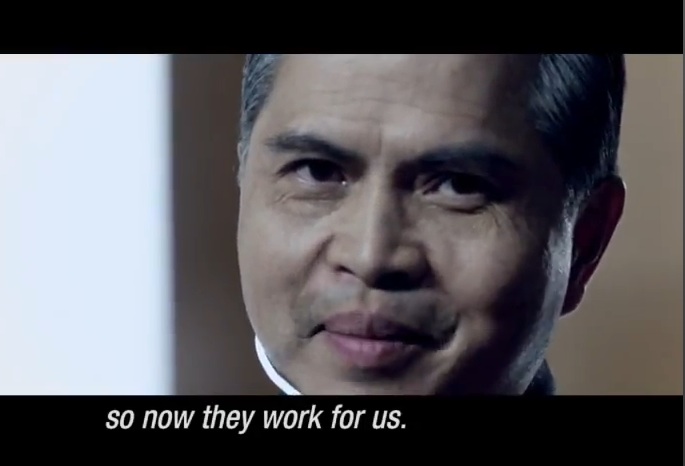 Super-PACs have spent millions on mostly negative ads, such as this one sponsored by Americans for Prosperity, which shows a Chinese professor gloating about Obama's economic policies.

With the election approaching, Americans are being spun like pinwheels, and media fact-checkers are struggling to keep up.

With less than two weeks to go before the elections, dark-money groups—Super PACs and 501(c)4s funded mostly by Republican backers—are hitting voters with propaganda flashier and more sophisticated than that of the old Soviet news organization Pravda.

It's 2:05 p.m. on a Friday. My phone rings. “Hello, this is Crossroads GPS calling. Elizabeth Warren says she's a champion of the middle class, but did you know…” Blah, blah, blah.

I hang up. I know what Crossroads GPS is: the 501(c)4 arm of Karl Rove's Super PAC, American Crossroads. I know its agenda is to make sure the Senate goes to the Republicans in November. Since Elizabeth Warren is challenging Massachusetts Republican Sen. Scott Brown, I know that whatever Rove’s caller is saying about her is probably 100 percent baloney.

But would my mother know Crossroads’ agenda well enough to hang up the phone, or to mute a Crossroads-funded commercial? My guess is that most people in the United States have no idea what American Crossroads is, or what a Super PAC is for that matter, and yet their political views are increasingly swayed by such groups. Both Kantar Media’s Campaign Media Analysis Group and a Wells Fargo analyst have projected political advertising spending to exceed $3.3 billion this year, a record.

The traditional role of the media, the Fourth Estate, is to offset propaganda with cold hard facts. So how are the media countering Super PACs’ influence on voters?

Last month, the media-policy group Free Press published a report on political programming, called “Left in the Dark.” The report looks at whether TV news programs that run political ads are balancing them with coverage of the role money is playing in this year’s elections.

The report focused on five mid-market media cities: Charlotte, Cleveland, Las Vegas, Milwaukee and Denver. It found that in August, election-related advertising increased in all five markets, providing viewers with a steady stream of political propaganda. For instance, the Tampa affiliates of the big four networks–ABC, CBS, NBC and Fox—aired an average of 200 political ads per day in the month leading up to the Republican National Convention.

To its credit, Tampa station WTSP, a CBS affiliate, thoroughly fact-checked an ad by Koch brothers-funded 501(c)4 Americans for Prosperity that had aired locally. The WTSP segment featured PolitiFact Florida’s Katie Sanders, who found that the ad made false claims about President Obama and the national debt.  “On the Truth-o-Meter this got a false,” Sanders told WTSP co-anchor Heather Van Nest.

But in Wisconsin, the hundreds of hours of local news that aired in the two weeks prior to the June 5 recall vote included no stories on the 17 groups most actively buying political-ad time on Milwaukee’s news channels. Yet these stations found time to air 53 local news segments on Justin Bieber.

Cynics will tell you that political speech is now a luxury product, not for riff-raff who live paycheck to paycheck. I’m squarely in their camp. The 2012 presidential election is yet another example of the toxic mix of money, politics and a cash-strapped media that is either no longer interested in disclosing the facts or too overwhelmed. We now rely on outside organizations like Factcheck,org to do it. Yet most voters will never hear their findings on the local news.

Overall, while many TV stations are covering local and national races, they are largely ignoring the ever-expanding role of money and the media in these contests, as Karr wrote in the report’s executive summary. Print is doing a bit better: A handful of papers are dedicating columnists and reporters to “ad watch.” The Washington Post provides an excellent service on its Campaign 2012 website by publishing up-to-date ad data from Kantar.

Although the Obama campaign is the biggest ad spender this election season—with $245 million spent to Romney’s $118 million as of mid-October—right-wing PACs such as American Crossroads and Restore Our Future outnumber and outspend left-wing ones. So far, $199 million has been dished out for pro-Romney ads by the 34 top-spending PACs, compared to $34 million for pro-Obama ads.

However, despite the spending gap, the Right and the Left employ the same disingeunous tactics in their ads: complete falsehoods mixed with basic assertions that would come to pass anyway. For instance, a Romney campaign ad in early September lambasted President Obama's jobs plan and claimed Romney would create 12 million jobs. The media, to their credit, went after this one like a school of sharks. According to the Congressional Budget Office, the U.S. would have created 9.6 million by 2016. Moody's forecasts 12 million in that time, regardless of who wins the election. So is Romney's plan a plan? Or is it taking credit for something that will probably happen regardless?

Broadcasters are already operating on a shoestring. But they absolutely need to expose the money that's influencing voters, and to offer factual corrections to political ad claims.

Here is the bottom line:  Do we want Super PACs or do we not? If around 50 percent of the ads or spending comes from pro-Democratic groups and another 50 percent or so comes from pro-Republican causes, then we still have an even playing field in the universe of political propagandizing.  But, as the data shows, if one type of political voice is dominating the scene and those ads are left unchecked, then the United States begins to look more like the old Soviet Union than the country we think we know.

This reporting is supported by The Media Consortium.

A longtime reporter and foreign correspondent for Dow Jones and the Wall Street Journal, Kenneth Rapoza is an In These Times columnist who writes about the news business. His work has also appeared in The American Prospect, The Nation and at Salon.com. He can be reached at ken@inthesetimes.com.