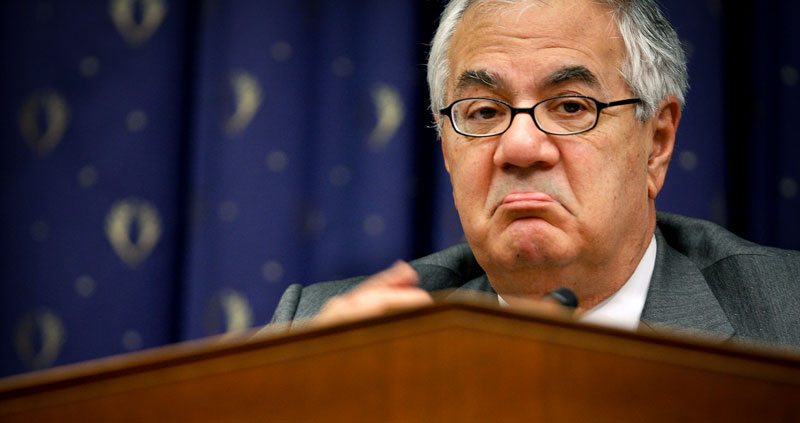 “On what planet do you spend most of your time? ... Ma’am, trying to have a conversation with you would be like trying to argue with a dining room table. I have no interest in doing it.” —Barney Frank at a 2009 public forum on healthcare reform, in response to a woman in the audience who referred to the Affordable Care Act as a “Nazi policy"

Barney Frank retires at the end of 2012; we will miss his Capitol wit.

Frank’s perseverance has paved the way for others. Today, he serves in the House with two openly gay colleagues, both Democrats: Reps. Jared Polis (Calif.) and Tammy Baldwin (Wis.)—who moves legislatures in January to become the first out Senator.

After more than three decades as the self-proclaimed only “left-handed, gay, Jewish congressman,” Barney Frank (D-Mass.) will retire in January.

When I was names Gay, Lesbian, Bisexual Program Manager at the Department of Agriculture in 1993, I immediately notified Frank’s office of my appointment. It was a good thing I did, as Sen. Jesse Helms (R-N.C.) soon attacked me for using government re- sources to support “a homosexual agenda.” Frank’s staff gave me early warning of Helms’ action and assured me I would be safe in my position.

Washington, D.C., is a difficult town to survive in personally and professionally, especially if you want to accomplish something. Everyone has an agenda; it can be dangerous to stick out one’s neck. Thus, it must have been a difficult and agonizing decision for Frank to come out of the closet in 1987, becoming the second openly gay man to serve in the U.S. Congress.

Another Massachusetts Democrat, Gerry Studds, was the first Congress member to come out, in 1982. The next year, Studds was involved in the House page scandal and censured for having a relationship with a 17-year-old. Studds retired from Congress in 1997 and died in 2006.

In the 1990s, two Republican members of Congress came out of the closet, or rather, were dragged out—Wisconsin Rep. Steve Gunderson by colleague Bob Dornan (R-Calif.), and Arizona Rep. James Kolbe by gay-rights activists upset that he voted for the Defense of Marriage Act. After a successful but bruising run for reelection as the first openly gay Republican candidate, Gunderson retired from Congress. Kolbe, too, announced in 2005 that he would not seek reelection; the next year he was investigated for “acting inappropriately” on a 1996 camping trip with two teenage pages (he was eventually absolved of any wrongdoing).

Among these gay congressmen, Frank alone weathered a hostile media, personal scandal and vicious attacks from his Republican colleagues. In 1995, former Texas GOP House Majority Leader Dick Armey was caught referring to Frank as “Barney Fag.” His apology was grudging.

“I rule out that it was an innocent mispronunciation,” responded Frank. “I turned to my own expert, my mother, who reports that in 59 years of marriage, no one ever introduced her as Elsie Fag.”

Frank’s perseverance has paved the way for others. Today, he serves in the House with three openly gay colleagues, all Democrats: Reps. Jared Polis (Colo.), David Cicilline (R.I.) and Tammy Baldwin (Wis.)—who moves legislatures in January to become the first out Senator.

This has been quite a year for Frank. He celebrated his 72nd birthday in March. He married his longtime partner, Jim Ready, in July. He successfully worked to place marriage equality into the 2012 Democratic platform, which President Obama endorsed.

Even now, however, Frank is still dogged by homophobia. In the conservative Washington Times, the Tea Party’s Doug Mainwaring called Frank’s wedding “a mockery, a parody, a staggering caricature of the most fundamental and towering of American institutions.”

In a recent interview with Washingtonian magazine, Frank said he “hates being classified as ‘the gay congressman,’” as his legislative accomplishments go beyond gay rights. Indeed, Frank introduced a constitutional amendment banning gender discrimination (though it did not pass) and co-sponsored the 2010 Dodd-Frank Wall Street Reform and Consumer Protection Act.

Frank will especially be remembered in Washington for his sharp wit. He once referred to advocating for gay marriage legalization as “cruising for gay rights.” He is a writer of devastatingly funny op-ed pieces, notably for the Washington Post.

Though Frank may not want to be known as only a gay congressman, when he speaks, the LGBT community listens. If Ronald Reagan was the Great Communicator, Frank is the Great Gay Communicator. For making Congress and our country more gay-friendly, Frank deserves our thanks and best wishes for his life after Congress.

Longtime Washingtonian James Patterson writes from San Francisco. He served as the first LBGT Program Manager for the federal government during the Clinton Administration. He is a former Foreign Service Officer with the State Department and served as attaché at the US Embassy in Mexico City. His reviews, essays and journalism have appeared in The San Francisco Chronicle, The Hill, The Foreign Service Journal, The New York Times, The Washington Post, The Christian Science Monitor and many other publications.