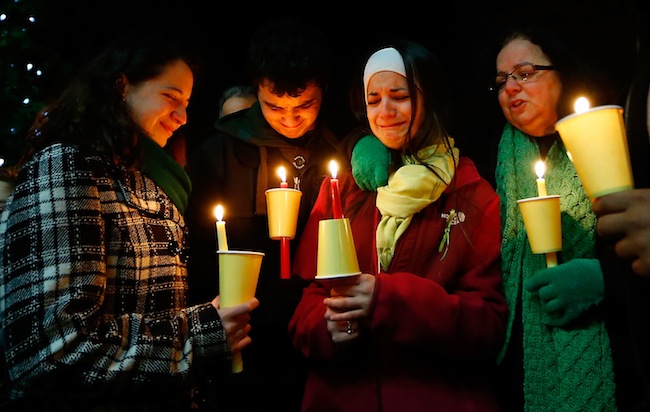 The family of Victoria Soto, a first-grade teacher killed while protecting her students at Sandy Hook Elementary, mourns at a candlelight vigil in Stratford, Conn. (Jared Wickerham / Getty Images)

After Newtown, Teachers Are the Heroes

As we honor the teachers of Newtown, let’s take a moment to honor all teachers.

“Teaching is not a lost art,” the historian Jacques Barzun once observed, “but the regard for it is a lost tradition.”

Long ago in my native homeland, Vietnam, I used to bow. As a grade school student, with arms folded, and eyes staring at my sandaled feet, I would mumble, “Thua thay!” – Greetings Teacher! – whenever I'd run into a teacher in the hallway or enter a classroom.

Such was the Old World tradition that honored and paid respect to the teaching profession.

That habit quickly disappeared, however, when I joined 7th grade in America. My way was entirely out of sync with U.S. culture. American kids were rowdy, wore colorful clothes and sometimes even swore at their teachers. And teaching was not mere instruction in America, I found. It was part babysitting, dealing with the unruliness that was the result of a society that increasingly emphasized self-esteem and individualism over achievement itself.

Teaching is still a noble profession but it’s a difficult and underpaid one, often with work overloads and a shrinking budget that results in classroom overcrowding.

With the tragedy of Sandy Hook, however, with 20 grade school students massacred by a madman and two teachers who died protecting them in Newtown, Conn., the image of the teacher in America has gone from an underappreciated chore to that of a hero.

Indeed, if TIME Magazine were to pick its Persons of the Year, it is hard to imagine that Victoria Soto and Dawn Hochsprung would not make the cut. Soto, a first grade teacher at Sandy Hook, hid her students and shielded others from the bullets of Adam Lanza, the assailant who committed one of the worse mass killings in the U.S. history. And Hochsprung, the school principal and mother of five, reportedly launched herself at Lanza, trying to overpower him. Both Soto and Hochsprung died protecting their charges.

But long before the Sandy Hook tragedy, many Americans already knew that a good teacher could, if not save, then change and inspire lives for the better.

Many luminaries from humble beginning continue to cite teachers as the main reason of their successes. Tom Hanks, for instance, thanked his high school drama teacher when winning his Academy Award for his role in Philadelphia. Oprah Winfrey is famously quoted touting the success of her elementary school teacher, Mary Duncan. “I know I wouldn't be where I am today without my fourth grade teacher, Mrs. Duncan,” she has said. “She so believed in me, and for the first time, made me embrace the idea of learning. I learned to love learning because of Mrs. Duncan.”

And James Baldwin owes much of his formative years to a white schoolteacher who recognized his talents, took him to plays and brought him books. “She was really a very sweet and generous woman and went to a great deal of trouble to be of help to us, particularly during one awful winter,” he recalled in Notes of a Native Son.

My first teacher in America was Mr. Kaeselau, a man whose compassion and kindness comforted my otherwise painful life in exile. Mr. K taught 7th grade English and spent his lunchtime tutoring me when the language was still unfamiliar to my Vietnamese ear, difficult on my tongue. He gave me my first book to read. He drove me home when I missed my bus.

But while influential teachers continue to instruct and inspire many youngsters in this country, the profession itself has taken a hit. While the media loves salacious narratives of the teachers who fail in their duties—there’s that recent conviction of the Texan teacher who had group sex with four high school students, and the ongoing saga of the Modesto, Calif., teacher who eloped with his student, abandoning his wife and kids—many potentially good teachers leave the profession for better pay.

Disaffected teachers cite the lack of parents’ involvement as a primary cause of faltering of education and overcrowding as a major cause of stress.

And even if respect is still associated with the profession, the economy is far from showing its appreciation. Many bright young people who would have gone into teaching have told me they were deterred by financial insecurity. “The only way we are going to make gains in education is if the quality of teachers goes up—and in our capitalist society, that quite simply means paying teachers more,” writes Matt Amaral, a high school English teacher. “This might be the single-biggest solution no one is talking about.”

“I would consider teaching seriously but if I ever want to own a house in the Bay Area, I might as well forget that profession,” a graduate from UC Berkeley once told me. In Silicon Valley, in order to keep talented teachers, there are now housing units being built for many who couldn’t afford a home, as the average salary for a beginning elementary school teacher is around $40,000 in a county where the median income is around $85,000.

Student-teacher relationships seem to suffer in a world defined by social media such as Twitter, Instagram and Facebook, not to mention sites such as RateMyTeacher.com. So many students now blog and tweet about their teachers, and teachers, fearful of defamation, vigilantly troll the Internet. The children’s hour has extended to 24-7 online, and this too adds to the stress of being a teacher.

“Teaching is not a lost art,” the historian Jacques Barzun once observed, “but the regard for it is a lost tradition.”

But perhaps that regard is no longer lost at this extraordinary juncture in American life, after the tragedy of Sandy Hook. The deaths of the innocents and the heroic sacrifice of the two women have ushered our nation to a turning point. Along with the collective need to reevaluate the country’s lax gun control laws, is a renewed reverence of the role of the teacher.

Many, from Peggy Noonan to Fr. Jonathan Morris, a well-known Catholic priest, now refer to ours as a “culture of death”—from gun obsession to blood-soaked video games to daily stories of gun violence to our drone wars abroad – two women stood at the door of life. If there was unspeakable carnage at Sandy Hook, there, too, was unimaginable sacrifice. What’s more noble, after all, than to give up one’s life so that others may live?

The teachers who died protecting their charges speak volumes to tender human relationships that have always been at the core of the teaching vocation. And so, almost four decades after I gave up that old tradition, to Victoria Soto and Dawn Hochsprung—to all dedicated teachers—I bow.