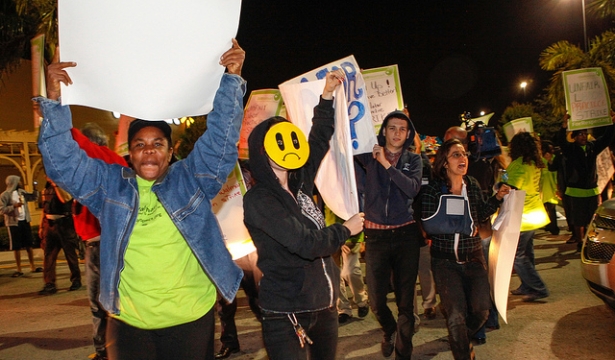 Nontraditional labor fights, like OUR Walmart's David-and-Goliath battle against the world's largest retailer, balanced a tough year for labor with some stirrings of hope. (Courtesy of OUR Walmart)

Labor certainly made news in 2012. But was it a banner year or a bruising one?

1. HOSTESS EATS ITS OWN

After the company filed Chapter 11 bankruptcy on January 10, members of the Bakery, Confectionery, Tobacco Workers and Grain Millers' International Union (BCTGM), which represents 6,600 Hostess employees, went on a monthslong struggle to maintain employee benefits that culminated in a nationwide strike in November. Unfortunately for workers, GEO Gregory Rayburn opted instead to liquidate the company and pin the blame on the union. (Photo courtesy of International Brotherhood of Teamsters) 2012 was bookended by the encroachment of right-to-work laws into the heart of the industrialized Midwest, a traditional stronghold of organized labor. Indiana Gov. Mitch Daniels led the way in his state, signing the law on January 25, and Michigan Gov. Rick Snyder followed suit in December. Such decisions have resulted in a backlash of demonstrations not only in Michigan and Indiana, but across the country . (Photo by Bill Pugliano/Getty Images) In only the third gubernatorial recall election in U.S. history, labor activists were disappointed in their hope of unseating Gov. Scott Walker on May 24. Walker had received immense criticism for passing a law to end the collective bargaining rights of state employees. Labor and supporters managed to collect over 900,000 signatures necessary to hold a recall election, but Walker held on to his post. (Photo by Mark Hirsch/Getty Images) Employees of American Airlines and American Eagle Airlines rallied outside a U.S. Bankruptcy Court in April to protest American's plans to cut jobs and labor costs. Employees of the major American airline have gone through a protracted struggle this year to retain contract rights after AMR Corp. filed for Chapter 11 bankruptcy in 2011. The labor disputes resulted in numerous flight delays and cancellations. (Photo by Spencer Platt/Getty Images) In June, NFL team owners announced a lockout of the unionized referees for the 2012 season after labor negotiations collapsed over referees’ refusal to accept a 60 percent cut in their pensions. The NFL, which takes in about $9 billion in annual revenue, hired scabs to replace the members of the NFL Referees Association. However, the NFL was pressured to end the lockout following poor performance of their replacement scabs, most notably in a September 24 game between the Green Bay Packers and Seattle Seahawks. (Photo by Belinda Hankins Miller / Wikimedia Commons) Apple–a company long lauded for its progressive and forward-thinking image–came under intense scrutiny this year when news broke in July of unfair labor practices at one of its electronics manufacturers, Foxconn. Apple quickly brought on the Fair Labor Association to launch an audit of Foxconn's facilities, such as this one in Shenzhen, China, revealing instances of insufficient overtime pay and frequent workplace accidents. (Photo by STR/AFP/GettyImages) During contract negotiations with the city, the Chicago Teachers Union shut down city schools form September 10-18—in the union’s first strike since 1987–until the city agreed to a contract that members approved. Decrying the increasing prevalence of charter schools, high-stakes testing and what CTU President Karen Lewis called “educational apartheid” in Chicago's city schools, the union has since started holding local town hall meetings across the country to bring awareness to these and other issues. (Photo by TalcottCTU / Flickr / Creative Commons) The Koch Brothers have long been funneling hundreds of millions of dollars into right-wing causes and candidates. However, an In These Times investigation revealed this past October that Koch Industries had sent out “voter information packets” to 45,000 employees at its subsidiary, Georgia Pacific, urging them to vote for candidates such as Mitt Romney who “have been supported by Koch companies or by KOCHPAC,” the company’s political action committee. Organized labor had less high hopes for Obama in 2012 than they did during his 2008 campaign. Nonetheless, unions came out to support the president, helping secure victories in vital swing states such as Nevada, Wisconsin and Ohio, where over 70 percent of union workers voted for Obama. (Photo by Jeff Fusco/Getty Images) OUR Walmart members and supporters organized the largest strikes in history against the retail behemoth on Black Friday, November 23, to draw attention to Walmart’s unfair labor practices and retaliation. The movement has since gone worldwide, with Walmart workers in 10 countries holding a global day of action on December 14. (Courtesy of OUR Walmart) A Bangladeshi Army personnel walks through the rows of burnt sewing machines in the Tazreen factory outside Dhaka, Bangladesh. The factory caught fire November 24, killing more than 110 of its 1000-plus workers. The factory was linked to such large Western brands as Disney, Sears, Dickies, Sean Comb's Enyce and Walmart's Faded Glory. Initial reports noted that the factory was ill-equipped for the fire, lacking both viable roads leading into the factory and safety exits. (Photo by Stringer/AFP/Getty Images) In what was the largest mass action ever against the $200-billion-a-year fast-food industry, two hundred workers from dozens of New York City fast-food chains walked off the job on November 29. The workers demanded a living wage of $15 an hour in addition to the right to organize a union. The campaign behind the walkout, Fast Food Forward, had been organizing New York's 50,000 fast food workers since the beginning of the year. (Photo by Spencer Platt / Getty Images) What did we miss? Overall, was 2012 a good or bad year for labor? Share your thoughts in the comments.