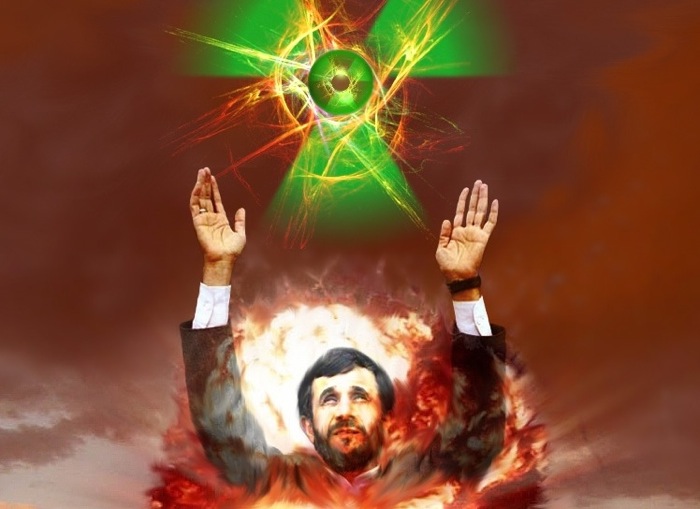 The "gravest threat" wouldn't be so grave if the Middle East was a nuclear-weapon-free zone. (Mark Rain / Flickr / Creative Commons)

The Gravest Threat to World Peace

Not everyone agrees it’s a nuclear Iran.

The "Iranian threat" is overwhelmingly a Western obsession, shared by Arab dictators, though not Arab populations.

Reporting on the final U.S. presidential campaign debate, on foreign policy, The Wall Street Journal observed that “the only country mentioned more [than Israel] was Iran, which is seen by most nations in the Middle East as the gravest security threat to the region.”

The two candidates agreed that a nuclear Iran is the gravest threat to the region, if not the world, as Romney explicitly maintained, reiterating a conventional view.

On Israel, the candidates vied in declaring their devotion to it, but Israeli officials were nevertheless unsatisfied. They had “hoped for more `aggressive' language from Mr. Romney,” according to the reporters. It was not enough that Romney demanded that Iran not be permitted to “reach a point of nuclear capability.”

Arabs were dissatisfied too, because Arab fears about Iran were “debated through the lens of Israeli security instead of the region's,” while Arab concerns were largely ignored—again the conventional treatment.

The Journal article, like countless others on Iran, leaves critical questions unanswered, among them: Who exactly sees Iran as the gravest security threat? And what do Arabs [and most of the world] think can be done about the threat, whatever they take it to be?

The first question is easily answered. The “Iranian threat” is overwhelmingly a Western obsession, shared by Arab dictators, though not Arab populations.

As numerous polls have shown, although citizens of Arab countries generally dislike Iran, they do not regard it as a very serious threat. Rather, they perceive the threat to be Israel and the United States; and many, sometimes considerable majorities, regard Iranian nuclear weapons as a counter to these threats.

In high places in the U.S., some concur with the Arab populations' perception, among them Gen. Lee Butler, former head of the Strategic Command. In 1998 he said, “It is dangerous in the extreme that in the cauldron of animosities that we call the Middle East,” one nation, Israel, should have a powerful nuclear weapons arsenal, which “inspires other nations to do so.”

Still more dangerous is the nuclear-deterrent strategy of which Butler was a leading designer for many years. Such a strategy, he wrote in 2002, is “a formula for unmitigated catastrophe,” and he called on the United States and other nuclear powers to accept their commitment under the Nuclear Non-Proliferation Treaty (NPT) to make “good faith” efforts to eliminate the plague of nuclear weapons.

Nations have a legal obligation to pursue such efforts seriously, the World Court ruled in 1996: “There exists an obligation to pursue in good faith and bring to a conclusion negotiations leading to nuclear disarmament in all its aspects under strict and effective international control.” In 2002, George W. Bush's administration declared that the United States is not bound by the obligation.

A large majority of the world appears to share Arab views on the Iranian threat. The Non-Aligned Movement (NAM) has vigorously supported Iran's right to enrich uranium, most recently at its summit meeting in Tehran last August.

India, the most populous member of the NAM, has found ways to evade the onerous U.S. financial sanctions on Iran. Plans are proceeding to link Iran's Chabahar port, refurbished with Indian assistance, to Central Asia through Afghanistan. Trade relations are also reported to be increasing. Were it not for strong U.S. pressures, these natural relations would probably improve substantially.

China, which has observer status at the NAM, is doing much the same. China is expanding development projects westward, including initiatives to reconstitute the old Silk Road from China to Europe. A high-speed rail line connects China to Kazakhstan and beyond. The line will presumably reach Turkmenistan, with its rich energy resources, and will probably link with Iran and extend to Turkey and Europe.

China has also taken over the major Gwadar port in Pakistan, enabling it to obtain oil from the Middle East while avoiding the Hormuz and Malacca straits, which are clogged with traffic and U.S.-controlled. The Pakistani press reports that “Crude oil imports from Iran, the Arab Gulf states and Africa could be transported overland to northwest China through the port.”

At its Tehran summit in August, the NAM reiterated the long-standing proposal to mitigate or end the threat of nuclear weapons in the Middle East by establishing a zone free of weapons of mass destruction. Moves in that direction are clearly the most straightforward and least onerous way to overcome the threats. They are supported by almost the entire world.

A fine opportunity to carry such measures forward arose last month, when an international conference was planned on the matter in Helsinki.

A conference did take place, but not the one that was planned. Only nongovernmental organizations participated in the alternate conference, hosted by the Peace Union of Finland. The planned international conference was canceled by Washington in November, shortly after Iran agreed to attend.

The Obama administration's official reason was “political turmoil in the region and Iran's defiant stance on nonproliferation,” the Associated Press reported, along with lack of consensus “on how to approach the conference.” That reason is the approved reference to the fact that the region's only nuclear power, Israel, refused to attend, calling the request to do so “coercion.”

Apparently, the Obama administration is keeping to its earlier position that “conditions are not right unless all members of the region participate.” The United States will not allow measures to place Israel's nuclear facilities under international inspection. Nor will the U.S. release information on “the nature and scope of Israeli nuclear facilities and activities.”

The Kuwait News Agency immediately reported that “the Arab group of states and the Non-Aligned Movement (NAM) member states agreed to continue lobbying for a conference on establishing a Middle East zone free of nuclear weapons and all other weapons of mass destruction.”

Last month, the U.N. General Assembly passed a resolution calling on Israel to join the NPT, 174-6. Voting no was the usual contingent: Israel, the United States, Canada, Marshall Islands, Micronesia and Palau.

A few days later, the United States carried out a nuclear weapons test, again banning international inspectors from the test site in Nevada. Iran protested, as did the mayor of Hiroshima and some Japanese peace groups.

Establishment of a nuclear weapons-free zone of course requires the cooperation of the nuclear powers: In the Middle East, that would include the United States and Israel, which refuse. The same is true elsewhere. Such zones in Africa and the Pacific await implementation because the U.S. insists on maintaining and upgrading nuclear weapons bases on islands it controls.

As the NGO meeting convened in Helsinki, a dinner took place in New York under the auspices of the Washington Institute for Near East Policy, an offshoot of the Israeli lobby.

According to an enthusiastic report on the “gala” in the Israeli press, Dennis Ross, Elliott Abrams and other “former top advisers to Obama and Bush” assured the audience that “the president will strike [Iran] next year if diplomacy doesn't succeed”—a most attractive holiday gift.

Americans can hardly be aware of how diplomacy has once again failed, for a simple reason: Virtually nothing is reported in the United States about the fate of the most obvious way to address “the gravest threat”—establish a nuclear-weapon-free zone in the Middle East.