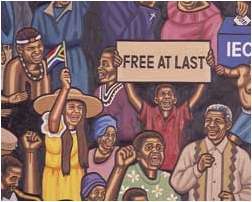 A detail from a mural, "Our History," by Sipho Ndlovu.

The Art of Law

South Africa President Thabo Mbeki will officially open Constitution Hill March 21—Human Rights Day—to coincide with his country’s 10th anniversary of democratic rule. It is the biggest urban renewal project since the end of apartheid and one of the first major public building complexes since the African National Congress took leadership in 1994. Its heart is the Constitutional Court. Through architectural design the building attempts to create a space that is open, egalitarian, diverse, uplifting, undeniably contemporary, African, and—driven by the passion of Justice Albie Sachs—filled with art.

Transitional South Africa never looks forward without looking back. In this spirit, new public buildings such as the Apartheid Museum, the Nelson Mandela Museum, the Legislative Buildings for the Northern Cape Province, the Hector Pieterson Museum, Soweto, and now the Constitutional Court Complex are becoming mnemonic aids to buried emotions. Artists who played key roles in the struggle against apartheid are creating a visual language to express the complexity and contradictory nature of locating history and vision in physical space.

This project is built on the site of the Old Fort, constructed by Transvaal Boer leader Paul Kruger’s Zuid Afrikaansche Republiek in 1899. It was designed to protect the settlement from gold-seeking foreigners and the mining village of Johannesburg below. But during the Anglo-Boer War the fort was used to hold Boer captives. It was a horrific place that functioned as a prison until 1983. Ordinary criminals as well as activists fighting oppression—including Nelson Mandela, Mahatma Gandhi, Nobel Peace Prize winner Chief Albert Luthuli, and human rights lawyer Bram Fischer—were incarcerated or detained there.

Former prisoners have been invited to take part in an oral history project by the Johannesburg Development Agency. Bheki Bhekisizwe Sibeko was detained in 1976 for terrorist activities. Of his time there he says: “This is the place where I last saw many of my friends, people whose bodies have never been found and whose relatives are still seeking answers. … We were beaten and thrown around like rugby balls.”

The dream was to transform a site thick with the injustices and brutalities of the past into a symbolic, functional and exquisite space for the present and future. Justice Albie Sachs hoped the building also would be “gentle rather than forbidding; entrancing rather than monumental; humane rather than austere; a building of the highest ideals for the humblest of persons.” The building had to have the gravitas necessary for a constitutional court but in no way flaunt the power of the state. It needed to be dramatic to usher in the new South African constitution—perhaps the most radical human rights statement yet written as a national document. The court also required “room to breathe and a certain autonomy” says Sachs, “to show its independence.” The idea itself embodied a deep signification, before it ever became a physical reality.

At a time when so much of wealthy urban South Africa is “basking in an interiorized Tuscan twilight,” as Lindsay Bremner writes, gated and suburbanized to make it “safe” and protected from those outside—Constitutional Hill is the opposite. The architects and designers have opened out the site, convinced that safety comes from creating true public space, filled with meeting places, educational locations, coffee shops, and gardens, alive with human interaction day and night. It also is essential to all those involved that the court not feel somber, but rather filled with aesthetic joyfulness, welcoming citizens as they go about their everyday life in the city.

At the core of the vision is an effort to refine this innovative court and its surroundings with the work of artists and artisans: from the finishes on the building and the designs for the sunscreens to the water pools, furniture and designated exhibition spaces. Artists from all regions of South Africa were invited to examine the 31 possible venues for artwork.

Added is the gigantic collection of art donated by many of South Africa’s most respected artists. The Dutch government contributed “The Presumption of Innocence,” three large tapestries by Marlene Dumas. Artist William Kentridge, whose father was a celebrated South African attorney, donated a very large, vulnerable painting of a naked, sleeping man (perhaps a self-portrait). The collection includes Judith Mason’s “Plastic Blue Dress” from the “Truth Commission Series” and Kim Berman’s “The Fires of Truth.” The South African National Gallery has lent the collection paintings from Gerard Sekoto’s “Paris Period” and there are a number of works from Dumile Feni.

Together the history of South Africa, in all its turmoil and pain as well as its abundant joyfulness, is reproduced. No other Constitutional Court or its equivalent has dared to incorporate so many images of the past abuses of its former legal system. It inspires great confidence to know that multiple systems of human thought can coexist, complement and embellish each other in this judicial context. It is heartening that for the new South Africa, intuition and creativity are as much at the center of what it means to be human as is the rational. The complexity and directness of this vision demonstrates that simultaneous experiences of reality exist and that true diversity can be found in their representations. Nothing has so vividly depicted the incredible psychic damage caused by apartheid to all individuals as art and literature. Nothing has so embodied the potential for healing as the enormous range of creativity South Africa manifests in multiple forms of artistic-design production. And because this legal system embraces difference, it confidently celebrates and therefore does not need to repress this range of human expression.

The choice to fill the court with art is largely due to the wisdom of Justice Sachs, who is committed to exhibiting this range of original images that have kept the South African exuberance for life alive during the country’s most horrific times. It is from this past that the new constitution has emerged. This story should be reflected on the walls of the new court with an art exhibition that, for Sachs, must be truly exciting and not “just pictures of dead judges.”

Such artistic intervention also is very much in keeping with the history of the anti-apartheid struggle. Artists and the images they created helped chronicle the horrors of apartheid for the world while mirroring them back to the nation itself. And art and artists, design and designers, are here now in this historic, exalted and symbolic context to chronicle South Africa’s new social reality.

Every inch of Constitutional Hill has been thought through with the intention of rendering the values of the constitution physical. From these values are derived what are called the site’s overriding themes: “Freedom, Equality, Dignity, Democracy, Non-Racism, Non-Sexism, Social Justice, Rule of Law, Reconciliation.” It is hoped that these ethics will be manifested in the exhibitions and pedagogical historical interventions, but also in the experiential—how the site feels and what it communicates visually. The routes by which people move around the hilly spaces, for example, have been conceptualized as winding paths as well as stairways, to simulate the switchbacks of the African landscape, so that rural visitors will feel at home in this urban setting. The courtroom itself has been designed so that the judge, the jurors and those being tried sit at the same height.

This is a building of the 21st Century, not only because the architecture is innovative but because it attempts to embody a complex set of philosophical, conceptual goals as it seeks to achieve a human scale. At every turn, those who designed the space appear to have been conscious of the obligation never to forget the blood that was spilled and the minds and lives lost on this site. And at every turn, they also have created a space that is inspiring, accessible, pedagogical and light. Once again, in South Africa, the miraculous has evolved out of the disastrous, and we are amazed.

Carol Becker is dean of faculty at the School of the Art Institute of Chicago. Her most recent book is Surpassing the Spectacle: Global Transformation and the Changing Politics of Art.