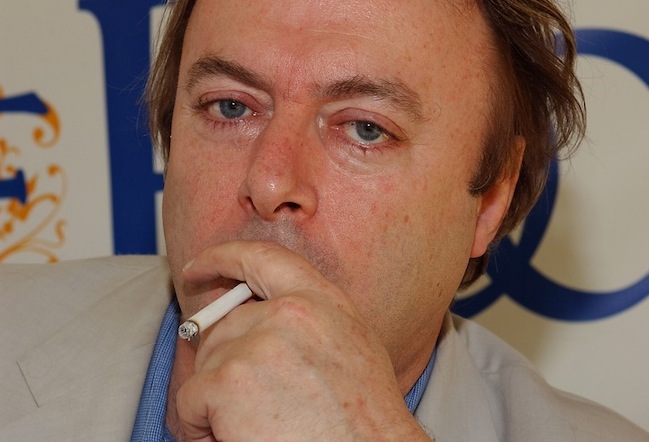 Christopher Hitchens at the LA Times Festival of Books in 2004. (Amanda Edwards/Getty Images)

With great vim and gusto, a new book dissects the ever-controversial Christopher Hitchens.

What emerges is a picture of Hitchens as an intellectually lazy poseur and a huffy racist—a man who, despite the remarkable breadth of his reading, “often lacked depth” and was “either unable or unwilling to cope with the sorts of complex ideas that he occasionally attempted to criticize.”

By the time of his death in December 2011, Christopher Hitchens had built a status perhaps outstripping that of any contemporary intellectual: His passing was considered worthy of the New York Times’ front page, and he was mourned by Tony Blair, Sean Penn, David Frum and Patrick Cockburn, among others. It is from this altitude that he is yanked down by Richard Seymour in the clever, incisive Unhitched: The Trial of Christopher Hitchens. The slim critique of Hitchen’s ouevre focuses on his engagement with British politics and literature, his work on religion and his double-armed embrace of American imperialism.

Though only 35, Seymour has made a name for himself as a thoughtful political analyst, notably in his book The Liberal Defence of Murder, on how the language of humanitarianism helps camouflage imperialism, and on his blog Lenin’s Tomb, an indispensible source for analysis of neoliberalism, the War on Terror and Islamophobia. Ironically, Seymour’s literary style often evokes that of Hitchens at his best. Some of Seymour’s turns of phrase are positively Hitchensian, such as his opening salvo in the introduction to Unhitched: “This is unabashedly a prosecution. And if it must be conducted with the subject in absentia, as it were, it will not be carried out with less vim as a result.”

And when writing in the prosecutorial mode, Seymour has, like his subject, a gift for reeling off an entire firing squad’s worth of bullets in a single sentence: “Hitchens was a propagandist for the American empire, a defamer of its opponents, and someone who suffered the injury this did to his probity and prose as so much collateral damage.” Seymour is also a Trotskyist, as Hitchens once was. But there the comparisons end, because Seymour is plainly a caliber of intellectual that his subject is not.

Accuracy, Seymour demonstrates, was not a major hang-up for Hitchens. Hitchens referred to Hugo Chávez as “the General” even though the Venezuelan never held that rank; said that Muammar Gaddafi turned over a “stockpile of WMD” although Libya never possessed even one such weapon; claimed in February 2003 that an invasion of Iraq would be justified because Abu Musab al-Zarqawi’s presence in that country demonstrated a link between Saddam Hussein and al-Qaeda even though Zarqawi was an opponent of al-Qaeda at the time and it wasn’t clear that he was in Iraq at all; and asserted that Tunisians revolted against the Ben Ali regime because they did not have to fear violent repression on the same scale that Iranian protestors face despite the fact that 224 Tunisians were killed in their uprising as compared to the 72 killed in the Iranian dictatorship’s crushing of the Green Movement in 2009.

What emerges is a picture of Hitchens as an intellectually lazy poseur and a huffy racist—a man who, despite the remarkable breadth of his reading, “often lacked depth” and was “either unable or unwilling to cope with the sorts of complex ideas that he occasionally attempted to criticize.” Here Seymour adduces Hitchens’ gross misreading of Edward Said’s Orientalism, his travestying of Marx’s view of history, and his crude theological discussions: for example, Hitchens interprets the biblical Abraham’s willingness to sacrifice Isaac as divine endorsement for the murder of children, an unpersuasive claim given that the story had precisely the opposite function in the historical context in which it was written and received.

Hitchens’ record on intellectual honesty is also rather blotchy. Seymour is not the first to note this; he points to John Barrell, who argued in the London Review of Books that sections of Hitchens’ Thomas Paine’s Rights of Man were lifted from other sources without proper attribution. Seymour contends that Hitchens’ The Missionary Position was a re-write of research done by an Indian author who does not receive credit in the original hardback, and demonstrates convincingly that Hitchens’ essay “Kissinger’s War Crimes in Indochina” borrows from Noam Chomsky and Edward Herman’s The Political Economy of Human Rights without crediting the authors.

If Hitchens was a serial plagiarist who failed to get even the simplest of facts right, was allergic to nuance, and made no scholarly contributions, one might reasonably conclude that he ought to be ignored, and that a reader’s time and Seymour’s considerable talents be put to better use. But Hitchens matters precisely because of the inverse relationship that the quality of his work has to his status. His career reveals much about the function of the public intellectual.

The familiar narrative of Hitchens’ career has it that he made an abrupt turn from Left to Right in the aftermath of the 9/11 attacks, but Seymour complicates this, noting that traces of Hitchens’ sympathy for empire could be detected much earlier in his career. As an example, Seymour cites Hitchens’ 1992 claim that European colonization of the Americas “deserves to be celebrated with great vim and gusto.” While Seymour notes that Hitchens did some important writing prior to his ideological shift, particularly in his opposition to the 1991 Gulf War, he says too little about the high-quality work Hitchens did in the 1980s on Palestine and Reagan’s wars in Central America.

That said, Hitchens’ later years and the enormous celebrity he enjoyed during that period are a case study of just how handsome the rewards are for those willing and able to serve as attack dogs for the dominant powers of their place and time. Hitchens’ main service to the American elite was to employ a combination of innuendo and character assassination to cast aspersion on virtually every high-profile figure critical of American foreign policy after 9/11—a roster that includes Julian Assange, Noam Chomsky, George Galloway, Michael Moore, Harold Pinter, Edward Said, Cindy Sheehan, Oliver Stone and Gore Vidal.

Hitchens could never have amassed such a large following—and perhaps more importantly, such a powerful following—had he not so entirely embraced American power and its corresponding ideologies after 9/11. Would Hitchens have been invited on as many talk shows if, rather than writing fawning biographies of safely institutionalized figures like Thomas Paine and Thomas Jefferson, he had taken as his exemplary subjects two others he professed to admire even near the end of his life, C.L.R. James and Rosa Luxemburg? If, instead of levying facile criticisms of organized religion primarily at the United States’ enemies, Hitchens had selected neoliberal capitalism for his most ferocious late-career critiques, is it likely that 60 Minutes would have profiled him when he was ill with cancer, or that his audience would have been extended to readers of Newsweek, much less the Weekly Standard?

Seymour’s book makes clear that Hitchens provides the best evidence one can find for Chomsky’s hypothesis that as intellectuals achieve increasing degrees of power, “the inequities of the society will recede from vision, the status quo will seem less flawed, and the preservation of order will become a matter of transcendent importance.” Nor is there a more perfect embodiment than Hitchens of Said’s argument that “Nothing disfigures the intellectual’s public performance as much as … patriotic bluster, and retrospective and self-dramatizing apostasy.”

To put the matter another way, consider Seymour’s justifiable revulsion at Hitchens’ revealing shifts in political friendships after 9/11: “It is one thing to sell out Sidney Blumenthal to the GOP, but to exchange Edward Said for Ahmed Chalabi? To smear Noam Chomsky yet endear oneself to Paul Wolfowitz?” Hitchens’ is the logic of an intellectual opportunist, of a man who has figured out the benefits of taking a clear stance with the established order: Relationships with Said and Chomsky will impress in certain circles, but they won’t get you the ear of the President of the United States or help you become chummy with the Prime Minister of England.

Hitchens was what Antonio Gramsci called an “organic intellectual”: a person who claims to speak for the interests of either a hegemonic or counter-hegemonic class. And, despite Hitchens’ protestations and pretensions of working-class sympathies, Seymour’s book makes clear Hitchens sided manifestly with the ruling class, particularly those factions of it that are concerned with foreign affairs. The most concrete expression of this was probably his joining the Committee for the Liberation of Iraq, which was initiated and headed by Bruce Jackson, a former vice president of Lockheed Martin. However, the primary task that Hitchens took up for America’s elite was to attempt to de-legitimize its opponents. In addition to his vicious but generally insubstantial attacks on critics of American empire, this took the form of him repeatedly asserting that all anti-capitalist movements were dead and that market forces are the world’s truly revolutionary force; of his sliming the alter-globalization movement and his justifying Arizona’s racist immigration laws (though these last two are among the few points that Seymour overlooks).

Hitchens thus stands in contrast to an organic intellectual of the counter-hegemonic kind—one who practices what Chomsky sees as the responsibility of intellectuals in Western democracies: to utilize “the leisure, the facilities, and the training to seek the truth lying hidden behind the veil of distortion and misrepresentation, ideology and class interest, through which the events of current history are presented to us.”

By no means is Seymour the first to call Hitchens a hack and a sell-out. In the aftermath of his full-throttled embrace of gunboat diplomacy post-9/11, unmasking Hitchens became almost a cottage industry for Left intellectuals. Among the finest of these are Tariq Ali’s chapter on his former comrade in Bush in Babylon, Clare Brandabur’s “Hitchens Smears Edward Said,” Norman Finkelstein’s “Hitchens as Model Apostate,” Glenn Greenwald’s counter-obituary, and more work by Alexander Cockburn and Terry Eagleton than I could list. But Unhitched offers a more thorough and in-depth discrediting of Hitchens than anything previously published. And in doing so, Seymour has made an important contribution to understanding the political role of the intellectual celebrity in our time.