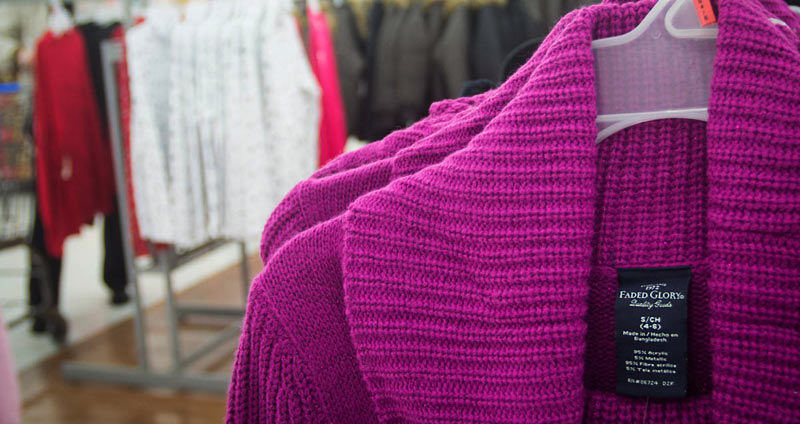 The Faded Glory display at the author's local Wal-Mart store in Berlin, Vt. (Courtesy of the author)

Clothing to Die For

Bangladesh garment workers earn an average of $43 a month, and sometimes lose their lives.

Well, isn’t that nice. A few weeks after a fabric-fueled inferno killed more than 100 locked-in garment workers at the Tazreen Fashion factory outside Dhaka, the 23rd Bangladesh Apparel and Textile Exposition gathered under a gold-colored “circular dome with dazzling lighting [like] a gala concert on a broad way [sic] theater,” the conference center’s website boasted. A minute of silence kicked off the proceedings, and then the reps and buyers turned to ensuring that Bangladesh, which has some of the world’s most poorly paid garment workers, wins the race to the bottom of low-wage countries. Last year clothing exports earned the country $19 billion, a whopping 78 percent of its total exports.

Bangladesh’s millions of garment workers average $43 a month. Like others around the world, they face not only the danger of fire, but also health and safety threats from dyes, formaldehyde, fiber dust and pesticide residue; damage to eyesight and hearing; and routine conditions, such as the unceasing noise and vibration of machinery, which promote neuromuscular and psychological disabilities.

Willi was 17 when she began working in a Bangkok garment factory for $5 a day. She sewed tiny pieces—a collar, cuff or bow—onto baby clothes for export. “When the fine dust comes out, I couldn’t breathe, and the noise hurt my ears. Even now I can’t hear a rain shower,” she says. “They don’t give ear protection. No masks. I just couldn’t breathe.”

In poorly ventilated factories around the world, workers like Willi inhale cotton dust that causes fatal byssinosis—brown lung disease. In India, as many as a third of textile workers, many of them children, suffer acute respiratory illnesses.

These expendable workers, mostly young women, cycle out when they become too infirm or, like Willi, land other jobs. Most of the health threats affect only workers, but some travel with the garments as they are exported, largely to the United States, Canada and Europe. Clothing and bedding that boasts it is “easy care,” “permanent press,” “stain resistant” or “wrinkle free” may have been treated with formaldehyde, which is embedded in the fabric. A 2010 U.S. government report found unacceptably high formaldehyde levels in clothing manufactured in Bahrain, India, China, Pakistan, Thailand and Indonesia. Samples from dozens of other countries contained “acceptable” levels of formaldehyde. In the United States, the toxin is not regulated in clothing, and “acceptable” is a fungible construct, especially when it comes to exposing infants and toddlers. Consumers who use formaldehyde-laced fabric can experience skin, eye and nose irritation and allergies.

Inhaled formaldehyde is more lethal. A known carcinogen, it is implicated in leukemia and multiple myeloma. The danger is exacerbated by dust, prolonged exposure, close quarters, humidity and heat—the very conditions that define sweatshops. Some major-brand clothing and shoes contain the toxin nonylphenol, “a persistent chemical with hormone-disrupting properties that builds up in the food chain” and is hazardous even at very low levels, Greenpeace warns. Again, workers sustain the greatest exposure.

The garment industry’s tangle of contractors, sub-contractors and sub-sub-contractors allows manufacturers and sellers to plead ignorance. When news broke that its Faded Glory brand had been manufactured in the Tazreen factory, Wal-Mart claimed it wasn’t in control of its supply line. But it and the other corporations that produced goods there—Disney, Sears and Sean Combs’ Enyce label—are quite capable of tracking the sources of their products when it’s in their interest to do so.

With China’s wages surging, and even India’s at double Bangladesh’s, Dhaka is not motivated to crack down—even though implementing safety standards would add only 10 cents to the cost of a T-shirt, the Worker Rights Consortium estimates.

A prominent display of Faded Glory brand garments at my local Wal-Mart sparked an urge to buy one, douse it with lighter fluid and set it ablaze in the parking lot—in memory of the millions of poisoned, underpaid and flammable workers who pay a high price so we can stuff our closets with cheap clothes.