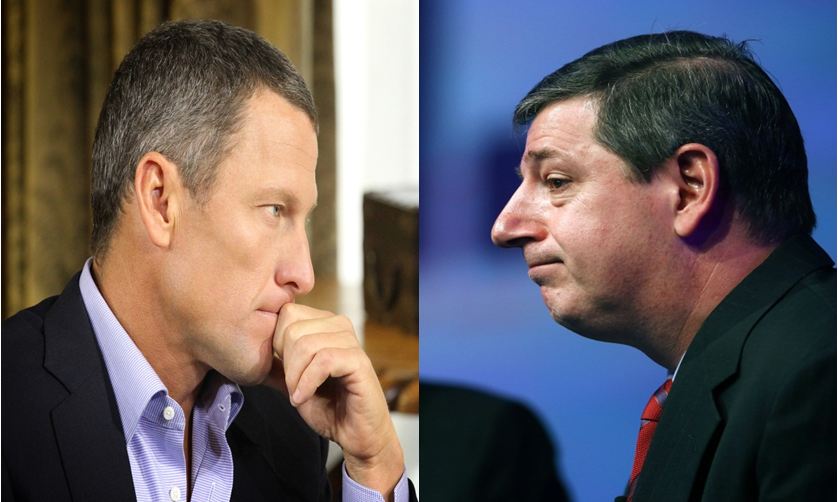 What Wal-Mart and Lance Armstrong Have in Common

After scandals, Armstrong and Wal-Mart seek redemption without remorse.

It’s their dopey concept of the atonement process.

Armstrong, already punished for misdeeds he’d denied, took to television on Thursday to finally confess. But he didn’t apologize. He didn’t follow the redemption steps: admission and regret; a pledge to reform and a plea for forgiveness, then penance. Wal-Mart didn’t follow those steps either. Its CEO made national news last week when he announced the retail giant would hire 100,000 veterans over the next five years and buy $50 billion more in American-made products over the next 10. But Wal-Mart has never admitted wrongdoing or expressed remorse.

But, like Armstrong’s admission, Wal-Mart’s announcement was met with skepticism because the retailer skipped atonement steps. Meaningless to the economy, The Atlantic wrote of the Wal-Mart promise. “A public relations stunt,” Time wrote.

Wal-Mart has much for which to atone. There is, for example, its leadership in blocking an effort to improve safety at factories in Bangladesh, where 112 workers would later die in a fire; its serial bribing of Mexican officials to circumvent regulations, and its snubbing of American warehouse laborers who are seeking better working conditions.

Let’s start in Bangladesh. There, Wal-Mart buys more than $1 billion in garments each year. The lure is the lowest garment factory wages in the world—$37 a month. But that’s not enough. Wal-Mart and other garment purchasers demand such low prices from Bangladesh factories that managers cut costs in ways that endanger workers.

After two Bangladesh factory fires in 2010 killed 50 workers, labor leaders, manufacturers, government officials and retailers like Wal-Mart met in the Bangladesh capital. A New York Times investigation found that Wal-Mart was instrumental in blocking a plan proposed at that April 2011 meeting for Western retailers to finance fire safety improvements.

A month after the fatal fire, a Wal-Mart executive promised the company would not buy garments from unsafe factories, but the giant retailer hasn’t offered any solution for improving conditions in Bangladesh factory fire traps, and a Wal-Mart executive has admitted the industry’s safety monitoring system is seriously flawed.

After being informed of the bribes by someone involved, Wal-Mart briefly investigated but then squelched that inquiry. Now Wal-Mart is under investigation by the U.S. Justice Department and Securities and Exchange Commission.

Here in the United States, workers at warehouses contracted by Wal-Mart in Southern California and Joliet, Ill., walked off the job last year protesting low pay, lack of benefits, unsafe working conditions and faulty equipment. Wal-Mart indicated it might discuss solutions with the workers, but last week, the retail giant rebuffed them.

Wal-Mart’s promise of 100,000 jobs for veterans is a good thing. Even if some of those jobs will be part-time. Even if the average Wal-Mart wage is $8.81 an hour —$15,576 a year—hardly enough for a veteran, or anyone else, to live on. Even if Wal-Mart will pay less than half those wages because the federal government will give companies that hire veterans tax credits of up to $9,600 a year for each veteran they employ.

Wal-Mart’s promise to buy an additional $5 billion a year in American-made products is a good thing. Even if $5 billion is a tiny number to Wal-Mart, which sold $444 billion worth of stuff last year. Even if Wal-Mart’s demand for ever decreasing prices from suppliers is the reason many say they moved factories overseas where laborers are overworked, underpaid and endangered and where environmental are fire safety laws are ignored. Even if Wal-Mart is buying more American not out of patriotism but because it makes sense financially with both foreign wages and transportation costs rising.

But Wal-Mart and Armstrong shouldn’t be surprised if their schemes don’t win them reconciliation with the American people. Armstrong’s failure to apologize reinforced the sense that he fessed up now only to secure the reprieve he wants from his punishment, from his banishment from certain sports. And Wal-Mart’s failure to even acknowledge that it has not been a perfect yellow smiley face of a corporation only evokes cynicism about its motives. No remorse, no redemption.