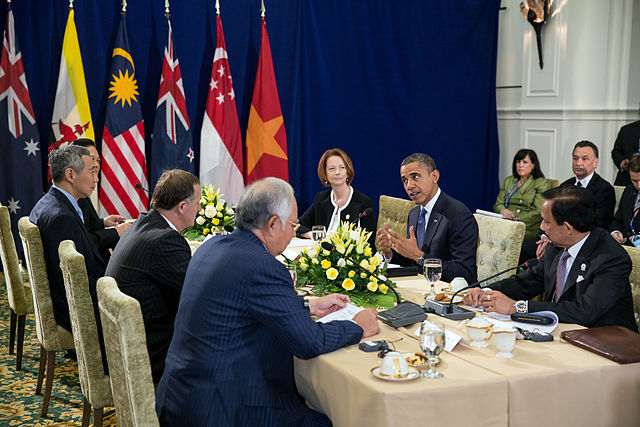 Obama talks TPP at a November 2012 summit. He plugged the trade pact in his 2013 State of the Union Address. (White House)

The Trans-Pacific Partnership is an imminent threat to American workers–and it has the Obama administration’s full support.

If the TPP were a central topic of debate in Congress and in the news, it would be certain to trigger alarm bells among a broad swath of Americans.

Updated at 10p.m. EST on February 12 after the State of the Union address.

President Obama, who disappointed workers’ rights advocates by snubbing labor in his inaugural speech, likely horrified them during Tuesday's State of the Union by not only overlooking unions again but also devoting a section of the speech to promoting the Trans-Pacific Partnership (TPP), a gigantic trade pact that has been described by Public Citizen’s Global Trade Watch director Lori Wallach as “NAFTA on steroids. ” By uniting the U.S. and 10 other nations along the Pacific Rim, the TPP threatens to spur the increased offshoring of jobs to Vietnam and Malaysia, which are increasingly being touted as even lower-wage alternatives to the miserable but rising wages prevailing in China.

Near the end of his State of the Union Address, the president announced:

We should remember that today’s world presents not only dangers, but opportunities. To boost American exports, support American jobs, and level the playing field in the growing markets of Asia, we intend to complete negotiations on a Trans-Pacific Partnership.

By pushing the TPP, Obama is fundamentally undermining his promise to build “an economy that works for everyone,” and—as Bill Clinton did with NAFTA—deeply alienating a substantial portion of his base along with much of the general public. No less than 53 percent of Americans are convinced that free trade has sapped America’s economic vigor.

Labor and allied groups such as the Citizens Trade Campaign have been working furiously to head off Obama from making the TPP a centerpiece of his second term agenda. They're endeavoring to activate the progressive wing of the Democratic Party and engage a public already furious with the flight of family-sustaining US jobs to repressive low-wage nations.

In a press call Thursday, Wisconsin Fair Trade Coalition President (and former Wisconsin state AFL-CIO President) David Newby warned that the TPP is certain to produce continued losses of US jobs while premised on the ruthless exploitation of foreign workers deprived of basic rights. “These ‘free-trade’ deals are always sold on the basis of more jobs in the U.S.,” said Newby. “But the TPP will in fact be a losing deal for US workers,” as well as for workers in other nations,” he warns.

The threat of job losses and wage cuts are no longer confined to industrial workers who have seen a loss of 4.9 million jobs and the closing of nearly 50,000 factories since Clinton inaugurated the era of “free trade” in 1994.

As highly profitable corporations seek even larger profits through outsourcing, the new casualties are professional, white-collar U.S. jobs, stressed Newby.  “We are seeing the job losses moving up the skill level of jobs,” he noted.

Moreover, democracy in America—and other nations as well—stands to be eroded by TPP’s provisions for “investor-state” lawsuits. These give multinational corporations the same status as democratically elected governments, allowing them to sue states over the costs of environmental and consumer protections. For instance, “Buy Wisconsin and “Buy American” laws could be challenged under TPP, Newby explained. These investor-to-state lawsuits are not heard in open court, but go before secretive international tribunals.

On the conference call, a number of Wisconsin union and farm leaders detailed how “free trade” deals like NAFTA—upon which the TPP is modeled—have destroyed industrial jobs and family-farm operations in Wisconsin.

Russ Krings, International Association of Machinists and Aerospace Workers District 10 director, said that IAMAW membership has dropped from 27,000 in 1994—the year NAFTA went into effect—to 11,000 currently. He says “most of that loss is due to ‘free trade ‘agreements,” which foster the relocation of jobs to Mexico and China while permitting the entry of Chinese government-subsidized products into the U.S. market.

Dave Bevers, a United Steel Workers member who lost his job when the Kimberly Paper plant closed in 2008, said flatly, “I lost my job to ‘free trade.’” The highly advanced Kimberly plant fell victim to low-cost government-subsidized Chinese paper imports and the crass machinations of the Cerberus hedge fund  that owned the plant.

As much as debate over  “outsourcing”—a more generic term for the “offshoring” of jobs—dominated the 2012 presidential campaign, the Trans-Pacific Partnership has barely been discussed in that or any other context at all. That is no accident. It reflects the secrecy in which the Obama Administration has enshrouded the proposal. Only about 600 corporate “trade advisors” have been involved in the talks over TPP, and relatively little has leaked to the press.  Even Congress has been excluded from the deliberations, prompting 132 Democratic members to fire off a letter of protest to President Obama in June of 2012.

If the TPP were a central topic of debate in Congress and in the news, it would be certain to trigger alarm bells among a broad swath of Americans. Intense opposition to “free trade” and the offshoring of jobs has spread from blue-collar workers to college-educated workers who now seem themselves as acutely vulnerable to job loss and pay cuts.

But the Democratic Party establishment—the president, key economic advisors, and of course major donors—has remained fixed in its zealous belief that “free trade” generates jobs and is ultimately beneficial to all Americans. In particular, President Obama—who campaigned fiercely against NAFTA and corporate globalization in the 2008 primaries—has now swallowed the free-trade Kool-Aid. This worldview is incessantly reinforced by elite media .

Concern over the job losses brought on by NAFTA and trade with China has been brushed aside by assurances that the “new economy” will generate new, better jobs to replace those which have been lost. This claim ignores the actual trends in new job creation: Fifty-eight percent of the jobs generated since the end of the recession in 2009 pay between $7.69 and $13.83 an hour. Re-training, another widespread “consolation prize” offered by elites in the face of working-class suffering and dislocation, has repeatedly failed to restore discarded workers to their former levels of income and job security.

While President Obama and the Democratic inner circle have been resolutely oblivious to these harsh realities, Democratic members of the House cannot afford to ignore widespread anti-offshoring sentiment among their voters, nor can they divert them with superficial blasts at “outsourcing” in campaign ads or by taking strong positions on other issues of concern, as Obama has done. A case in point is Democratic Rep. Mike Michaud of Maine, who explained his vote against three Obama-proposed “free trade” agreements in 2011 thusly, “What I am seeing firsthand is devastation that these free trade agreements can do to our communities.” (Obama won all three by gaining the vast majority of needed votes from Republicans.)

But will they raise sufficient hell to sidetrack the partnership? This question will be answered in large degree by the degree of heat that Democrats feel from labor and its global justice allies in farm, environmental and student organizations. Last year, AFL-CIO President Richard Trumka said he had endured “a snootful of that shit” from the Obama administration as it continually backtracked on issues of importance to working people, including offshoring.

To create the critical mass necessary to sway Washington, labor and other groups will need to mobilize a group that has been silent of late around trade issues: college-educated liberal Democrats. This central Democratic constituency feels some anxiety over job offshoring, but not with nearly the intensity of blue-collar workers. This group’s political identity has been heavily influenced by their concern over the moral dimensions of social issues such as racial equality, abortion and other reproductive-rights issues, and full civil rights for gays, rather than economic issues. However, for younger members of this group, economic issues have assumed more salience as they face declining job prospects and are weighed down by enormous student debt burdens, along with being deeply influenced by the Occupy movement’s influential framing of economic issues.

To reach this influential segment of the Democratic Party, labor and its allies will need to fully draw out the moral implications of the Trans-Pacific Partnership. How can President Obama speak of “shared prosperity” when the TPP will further marginalize and degrade working people in the United States? How can Obama proclaim his belief in “human rights” when the TPP—like NAFTA—is premised upon the systematic destruction of fundamental labor rights in countries such as Vietnam and Malaysia?

If the TPP juggernaut is to be stalled, labor and its friends will need to forcefully inject these questions into the public discourse. And then, of course, wait and see whether public discourse actually influences our public representatives.