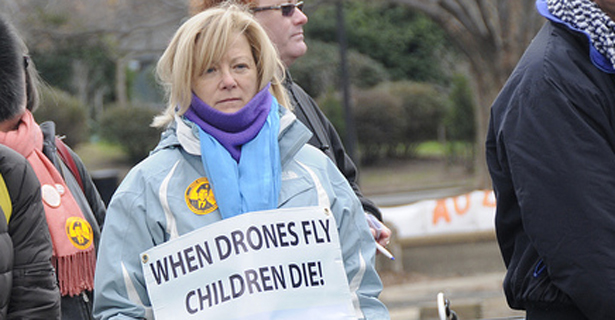 Our politicians have forgotten that the truly humane path is finding alternatives to war.

Having been told in so many ways that killing is the best and only possible policy prescription, most simply assume that our only national security choice is between drone wars and ground wars—between different forms of preemptive violence, and nothing else.

In my years reporting on the intentional narrowing of political vernacular to guarantee specific outcomes, I have encountered no better example of Orwellian newspeak than that which now dominates the conversation about America's drone war. Given that, it's worth reviewing the situation because it is so illustrative of how militarist propaganda operates in the 21st century.

As you know if you've paid attention to recent news, drone war proponents are currently facing inconvenient truths. This month, for instance, they are facing a new United Nations report showing that President Obama's escalation of the War in Afghanistan—which is defined, in part, by an escalation in drone airstrikes—is killing hundreds of children “due notably to reported lack of precautionary measures and indiscriminate use of force.” They are also facing news that the rise in drone strikes is accompanying a rise in al-Qaeda recruits, proving that, in predictable “blowback” fashion, the attacks may be creating more terrorists than they are neutralizing.

Drone-war cheerleaders will no doubt find this news difficult to explain away on the merits. And so many are trying to change the linguistic foundation of the discourse from one rooted in fact to one rooted in a sophistry that narrows the public's perception of available choices.

“Drones are a lot more civilized than what we used to do,” he told a cable television audience. “I think it’s actually a more humane weapon because it can be targeted to specific enemies and specific people.”

Designed to obscure mounting civilian casualties, King's Orwellian phrase “humane weapon” is the crux of the larger argument. The idea is that an intensifying drone war is necessary—and even humane!—because it is more surgical than violent global ground war, which is supposedly America's only other option. As New York Times columnist David Brooks summed it up: drone strikes are great because “they inflict fewer civilian deaths than bombing campaigns, boots on the ground or any practical alternative.” Or, as one drone-war defender put it on Twitter: “Drones? 160,000 pairs of boots on the ground? Hmm.”

In a country whose culture so often (wrongly) portrays bloodshed as the most effective problem solver, many Americans hear this now-ubiquitous drone-war argument and reflexively agree with its suppositions. Having been told in so many ways that killing is the best and only possible policy prescription, most simply assume that our only national security choice is between drone wars and ground wars—between different forms of preemptive violence, and nothing else.

The failure to question such an assumption represents what can be accurately described as a fundamentalist religion. After all, if faith is the belief in something without proof, then refusing to question martial assumptions represents a theology of militarism. And it’s not just any such theology—but one so willfully blind that it will not allow the realities of blowback and civilian casualties to shape its catechism.

It will not permit, in other words, a discussion of what MSNBC's Chris Hayes calls the other alternative.

“We can be a nation that declares its war over, that declares itself at peace and goes about rigorously and energetically using intelligence and diplomacy and well-resourced police work to protect us from future attacks,” he suggests.

By deliberately ignoring this particular option, drone-war proponents who employ choice-narrowing language are the militarist dogma's most destructive evangelists.

At a moment when we should be having a broader conversation about alternatives to permanent war, they are preventing that conversation from even starting. In the process, they are precluding America from making more prudent, informed and dispassionate national security decisions—the kind that might stop us from repeating the worst mistakes of our own history.