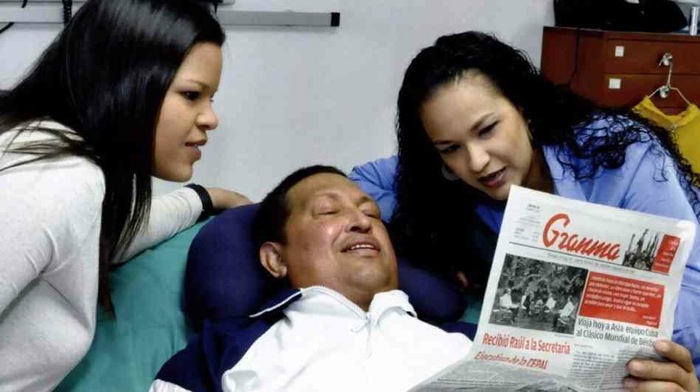 How Long Can Hugo Chavez Call In Sick?

Venezuela’s ailing president has kept the wolves at bay for 69 days, but restlessness is brewing.

The decision to disconnect Chávez from his assisted breathing machine—if he is in fact connected to one, as is widely assumed, even in Venezuela—is not one that can be taken lightly by his family and political successors.

Until the Venezuelan government released photos on Friday of Hugo Chávez reading a newspaper in a hospital bed, the president of Venezuela had not been publicly seen since Dec. 10, 2012, when he left for Cuba to undergo a fourth operation related to complications from cancer.

What exactly is happening with Chávez is a mystery because the Venezuelan government has treated his health as a state secret, and the Cuban regime, which never publicly discusses any government official’s health, has had no trouble following suit. More than 30 vague official government communiqués have been issued—mainly by Venezuelan Vice President Nicolás Maduro, Chávez’s designated successor, and Minister Jorge Arreaza, Chávez’s son-in-law—but almost all have limited themselves to descriptors such as “stable,” “delicate,” “complex” and “difficult.”

Unlike Chávez’s other trips to Cuba for medical treatment—when he maintained a presence on Twitter and appeared on TV —this time Chávez communicates through typed letters and stories from his cabinet members. “Why is a person who can sign letters, a person who can make jokes, not able to speak to the country?” demanded Henrique Capriles Radonski, the opposition’s losing presidential candidate.

Meanwhile, Venezuelans of all stripes are asking for proof of life. Chávez skipped his inauguration in January, but according to the country’s Constitution (practically dictated by Chávez), only the president can declare himself incapable of performing his duties. And if the president is, in fact, incapable of making such a declaration, well … what then?

Is there a precedent for this? Has a dying/convalescing president ever handed his fate over to the leaders of another country in quite this way? Has it ever happened before that a nation’s cabinet must meet in another country in order to run its business? Has a small, poor country like Cuba ever held so much influence over its patron?

To be clear, when the Chávez-controlled Venezuelan Supreme Court cleared the way for the president to move to Cuba indefinitely and even to skip his own inauguration, the opposition called the decision a “grave alteration of the constitutional order.” Opposition leader Maria Corina Machado spoke of “usurpation” of the legal process. The mayor of Caracas, Antonio Ledezma, said that Maduro had basically carried out a coup, not against Chávez but against the way things are supposed to work constitutionally. But Organization of American States Secretary-General José Miguel Insulza said that Venezuela’s constitutional crisis had “already been resolved by the three state branches of Venezuela, as the executive articulated the problem, the legislative considered it, and the judicial branch solved it.” Never mind that all three state branches are firmly under the control of Chávez forces.

There are, of course, all sorts of reasons to try to maintain some sort of administrative continuity, no matter what’s going on. And the decision to disconnect Chávez from his assisted breathing machine—if he is in fact connected to one, as is widely assumed, even in Venezuela—is not one that can be taken lightly by his family and political successors.

It’s also clear that Maduro and his Cuban advisors have concluded that time is needed to allow Maduro to consolidate power and improve his poll numbers before the unavoidable next presidential election. Then again, they don’t want to wait too long: Maduro could probably win an election if it were to be held soon, what with recent Chávez victories in October and again in December (by which point Chávez was already bedridden in Cuba), but the odds could turn if the election is held much later and the economic crisis brewing in Venezuela develops its own momentum.

Eight million Venezuelans confirmed Chávez’s 14 years in power in the last election, but 6.5 million—the most ever—voted against him. And no one in Venezuela—not Maduro or any of Chávez’s other political and familial heirs—enjoys, or is likely to enjoy, the near-religious ardor that Chávez has. What this means is that until Chávez reappears or is declared dead, and even beyond that, Venezuela—and Cuba if the opposition wins the post-Chávez elections and cuts ties—is in for a long period of instability.