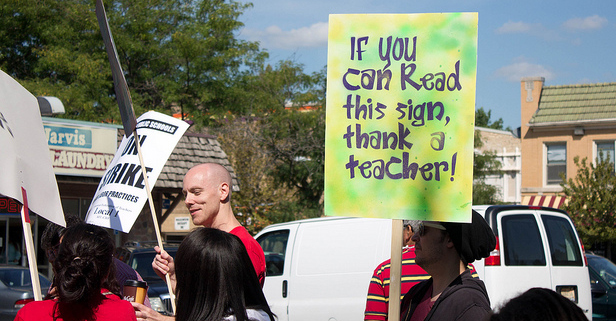 Chicago’s Board of Education creates a crisis, and charter school operators reap the benefits.

Charter operators push back on any efforts of their staffs to unionize. When public schools close and charters open, teachers unions become weaker. Teachers unions are democratic institutions with ties to the communities they serve. When the public is disempowered, the small patronage army of the mayor becomes more entrenched.

In public policy circles, crises are called “focusing events”—bringing to light a particular failing in government policy.  They require government agencies to switch rapidly into crisis mode to implement solutions. Creating the crisis itself is more novel.

The right-wing, free market vision of University of Chicago economist Milton Friedman informed the blueprint for the rapid privatization of municipal services throughout the world due in no small part to what author Naomi Klein calls “disaster capitalism.” Friedman wrote in his 1982 treatise Capitalism and Freedom, “When [a] crisis occurs, the actions that are taken depend on the ideas that are lying around”

In Klein’s book The Shock Doctrine, she explains how immediately after Hurricane Katrina, Friedman used the decimation of New Orleans’ infrastructure to push for charter schools, a market-based policy preference of Friedman acolytes. Secretary of Education Arne Duncan was the CEO of Chicago Public Schools at the time, and later described Hurricane Katrina as “the best thing that happened to the education system in New Orleans.” Duncan is of the liberal wing of the free market project and a major supporter of charter schools.

There aren’t any hurricanes in the Midwest, so how can proponents of privatization like Mayor Rahm Emanuel sell off schools to the highest bidder?

They create a crisis.

Each year, Chicago Public Schools (CPS) projects a billion dollar deficit. The announcement grabs headlines and the Board of Education announces that they must make serious cuts. These cutbacks are never at the top. The Board cuts education programs, after-school activities, and forces more classroom costs onto its employees.

School closings are announced tangentially to the deficit announcement. In years past, the manufactured budget crisis was used as an excuse to lay off teachers. People were fired, class sizes swelled to epic proportions and—after the budget was reconciled—CPS miraculously found a surplus. This past year’s final audited budget showed a surplus of $344 million.

The Chicago Board of Education announced that it must close “underutilized” schools and consolidate students into “receiving schools” to save the district from the projected deficit. The Board argues that some schools simply do not enroll enough students to stay open. A local teacher and parent published ten questions to Chicago Public Schools regarding how much can actually be saved by closing these schools. The Board’s responses revolved around the idea that previous administrations have let the problem get so bad they must act fast and close these schools or else the district will fall over a fiscal cliff—sorry, wrong manufactured crisis—but you get the idea.

So now we have a crisis. Schools closed and students shifted around the city. Many of them may have to cross gang territories to get to their receiving schools. School violence spikes. As Rahm Emanuel said in 2008, “You never want a good crisis to go to waste.”

If only there were a solution “lying around” to attach to this crisis.

At the end of 2012, the Chicago Board of Education approved additional charter schools. The Walton Family Foundation provided seed money for some of these schools. Charter school proliferation can take part of the blame for schools being “underutilized,” as they draw students from other schools, but the Board’s metric for calculating utilization is also suspect.

Charter schools become the “solution” lying around for parents who want to keep their students close to home in a school that will not be closed the following year. Many charter schools have been infused with additional resources, making their facilities look shiny and new. Parents, through the market-based “choice” system (which is revered by Friedmanites), may enroll their children in these new schools. That is, unless their children have special needs, are learning English, or are simply bad at taking tests. Reuters recently published a report that showed how charter schools “cream” students to get the kids they want.

Charter schools that invest heavily in public relations campaigns receive positive press, but when stacked against magnet schools, which are public schools (staffed by union teachers) with barriers to access, they do not outperform.

Students with special needs, limited English proficiency, or without a regular place to call home are forced to fight over limited resources in the public schools.

This scene is playing out at school closing hearings held by CPS, underwritten by the Walton Family Foundation. School communities are forced to make the case for keeping their schools open. At a recent meeting on Chicago’s north side, schools that take in homeless students from the blighted Uptown community were pitted against schools with programs that address special needs. Some observers likened the scene to the young adult novel-turned-film The Hunger Games, where children are forced to fight to the death for the amusement of the 1%.

In real life, our rulers don’t bother to stick around and watch the fruits of their policy. But they’re more than happy to benefit. The Chicago elites’ charter schools are self-perpetuating gifts. The recent UNO Charter School Scandal shows how people connected to charters can dole out contracts to friends and family. The UNO network was the recent recipient of $98 million in state aid to build more schools.

The head of UNO, Juan Rangel, was co-chair of Chicago Mayor Rahm Emanuel’s election campaign. Members of Rangel’s organization are now in the business of installing Illinois state representatives, the very people who hold the purse strings of these state grants. This is the face of the new municipal political machine.

Charter operators push back on any efforts of their staffs to unionize. When public schools close and charters open, teachers unions become weaker. Teachers unions are democratic institutions with ties to the communities they serve.  When the public is disempowered, the small patronage army of the mayor becomes more entrenched.

The sale of public schools to charter operators cannot be done slowly. The fast pace of crisis management obscures the graft from the public. UNO specifically needs to operate under these crisis management conditions.

UNO operates under $67,800,000 in outstanding debt. The $98 million state gift cannot be used to pay back this debt because it has been earmarked for capital projects, namely building or improving schools.  The only way to keep the UNO patronage train rolling is by continuously expanding and opening schools, with construction contractors serving as potential allies come election time.

The free-market think tank American Enterprise Institute recently praised this particular brand of charter school. The use of patronage in government hiring was a major argument Friedmanites used for privatizing public services. AEI praises UNO’s “assimilationist” philosophy of teaching immigrant youth so perhaps AEI finds more merit in diluting non-European cultures than in ending patronage. I’m not exactly sure where that fits into the free market orthodoxy, but then again, the contradictions in the philosophy far from end there.

Friedmanites often criticize redistributive policies as “picking winners and losers.” From the manufactured schools crisis to the market-based solution of charter schools, it appears that the “free market” model picks winners and losers; the winners being the politically connected and the losers being the rest of us.

This article was reprinted with permission from Jacobin.