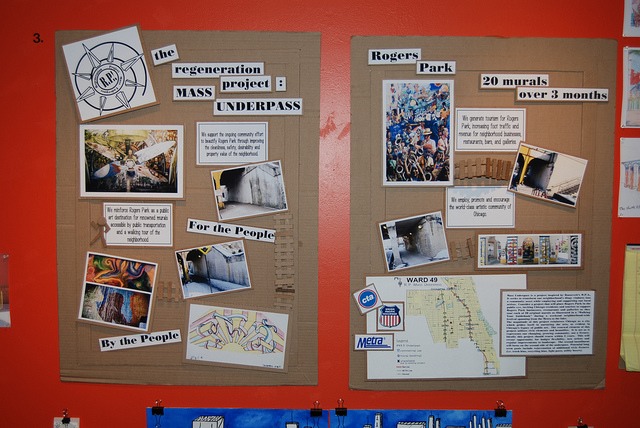 The Regeneration Project was one of several possible projects that residents of Chicago's 49th ward voted on last year as part of the participatory budgeting process. This year the 5th ward will become the first on the city's South Side to implement participatory budgeting. (Samuel A. Love/ Flickr / Creative Commons)

Budgetary Power to the People

An experiment with direct democracy on Chicago’s South Side.

If the process is seen as a failure, it could further alienate Chicago citizens, many of whom are already wary of local politics. But if it’s successful, it could encourage further political engagement and a greater sense of what’s possible.

It’s a January night in the 5th Ward of Chicago, and a small group of ward residents have gathered at Alderman Leslie Hairston’s office in the South Shore neighborhood to evaluate a long list of ideas on how to improve the ward’s transportation system. All can agree that something needs to be done about the dangerous intersection near a neighborhood club on 55th street, where drivers can’t see pedestrians in the walkway until after they’ve accelerated around a curve. As they discuss the different options—pedestrian crossing signs? a stop sign? a roundabout?—they estimate how much each would cost, and consider complicating factors, like the fact that the eastern edge of the intersection is located in the neighboring ward.

The meeting is part of the 5th Ward’s attempt at implementing participatory budgeting, a process that allows citizens to choose how municipal funds could be best spent in their communities. In this case, the funds are the ward’s so-called “menu money”—the $1.3 million allotted annually to every ward to spend on small infrastructure projects, like fixing pot holes or installing pedestrian walkways. In the past, aldermen and ward staff have had full discretion in deciding what projects to fund. But this May, for the first time, 5th Ward residents will have the opportunity to vote directly on how the money should be spent.

The vote in May will be the culmination of a near yearlong process during which community members brainstorm potential uses of the money, narrow down the options and develop detailed project proposals. The ward is currently in the second stage: paring down over 170 ideas to create 32 proposals that ward residents will ultimately vote on.

The three community representatives gathered in Alderman Hairston’s office are members of the transportation committee, one of six committees tasked with evaluating ideas and developing proposals. (The other five committees are arts and culture, parks and recreation, centers and spaces, public safety and streets.) A total of 40 ward residents have volunteered to serve as community representatives, choosing which committee to join based on their individual experience—for example, Robert Daniels says he joined the transportation committee because he takes public transit everywhere he goes. But as the transportation committee discusses the project ideas residents have submitted—more benches at bus stops, sidewalk repairs, disability access ramps on walkways—they’re finding that many may fall under the jurisdiction of city agencies like the Chicago Transit Authority, a condition that Alderman Hairston says makes them ineligible for ward menu money. By the end of the meeting, the transportation committee has narrowed the list of ideas down to three: replacing broken reflective poles at a bike path, connecting two independent bike paths and installing a stop sign at a notoriously dangerous pedestrian crossing.

When the concept of participatory budgeting was created in 1989 in Porto Alegre, Brazil, by the Brazilian Workers’ Party, it represented a radical step forward for democracy in a city, and country, long-oppressed by the military government that had ruled by force for two decades. Every year, fifty thousand Porto Alegre citizens collectively determine the budget for many of the city’s services and infrastructure projects. Once plagued by severe income inequality and ubiquitous slums, Porto Alegre has benefitted significantly from participatory budgeting. As David Lewit wrote in YES! magazine in 2002, “In seven years, housing assistance jumped from 1,700 families to 29,000. In 12 years, the number of public schools increased from 29 to 86, and literacy has reached 98 percent.”

By 2007, the concept had spread to over 1,200 cities across the world, but in the U.S. it has only been attempted in specific neighborhoods in New York City and Chicago. Until last year, participatory budgeting in Chicago had been limited to a single ward, the 49th, where Alderman Joe Moore introduced the process in 2009. Since then, his constituents have voted for projects that range from the mundane but necessary—like street resurfacing—to more colorful proposals like murals and a dog park. Meanwhile, Moore has been proselytizing to other city council members, and this year, three other wards—the 5th, 45th and 46th—are jumping in.

Alderman Hairston and 5th Ward residents became interested in participatory budgeting after Alderman Moore visited a 5th Ward meeting in 2011 to share how it worked in his Rogers Park neighborhood. Hairston says, ” I have a very active community, people employed in all walks of life—in the park district, in community issues—so I wanted to share the decision-making with them.”

Still, $1.3 million can only go so far, and the 5th Ward—the only South Side ward to try participatory budgeting—faces unique challenges. The ward, which includes parts of the Hyde Park, Woodlawn, Greater Grand Crossing, and South Shore neighborhoods, is home to the University of Chicago and lakefront condominiums, but also includes blighted, impoverished inland blocks. The housing crisis may be slowing in other areas in Chicago, but the 5th Ward continues to struggle with foreclosures. (According to a February report by the Woodstock Institute, in 2012, foreclosure auctions in the 5th Ward jumped 62.7 percent from the previous year.) The range of project ideas that community members have come up with so far speaks to the diverse priorities of ward residents—some want luxuries like a heated driving golf range, others simply want more street lights so they can walk more safely at night.

The ward is also confronting an education crisis perpetuated by the city’s so-called reform agenda, which shutters public schools in favor of privately run charter schools. In recent years, four area public schools have closed, and currently, Mayor Rahm Emanuel and the Chicago Public School system are considering closing up to 12 of the ward’s remaining 21 schools.

$1.3 million isn’t going to do much toward ameliorating the ward’s most pressing problems. But in a city not inclined to involve the public in decision-making—Mayor Emanual has attacked both the idea of having an elected school board and a budget oversight committee—the democratization of ward menu money is a small step, but a significant one. As Pat Wilcoxen, a member of the 5th Ward’s leadership and transportation committees, puts in, “Anything that adds more transparency and involvement of the citizenry is a good idea.”

Bumps in the road

On Valentine’s Day, when the transportation committee held its next meeting, it received bad news: All 23 of the committee’s ideas had been designated as “service requests,” which means they fall under the responsibility of other city agencies. Alderman Hairston says she doesn’t want the 5th Ward to spend its limited menu money to fund the work of other agencies. So effectively, the transportation committee now oversees zero projects.

Wilcoxen was discouraged by the development. “I think we owe it to all those people that came out to the community meetings—if you want those people to get back to us again, you have to show them something, because why would they believe all this rhetoric if nothing comes of it?”

Wilcoxen’s concern points to a larger truth about the participatory budgeting experiment: There’s more at stake in this project than the $1.3 million in menu money. If the process is seen as a failure, it could further alienate Chicago citizens, many of whom are already wary of local politics. But if it’s successful, it could encourage further political engagement and a greater sense of what’s possible.

Elliot El-Amin, a South Shore resident and a representative on the 5th Ward’s Centers and Spaces Committee, already sees positive developments emerging from the process. El-Amin has helped weed out some of the more elaborate and prohibitively expensive ideas. Though the menu money won’t fund a youth center or a skating rink, he sees a promising future for his ward in the collective discussions that have been taking place. “We had an idea of a dance and art center, and of course we couldn’t fund it, but that person [who came up with the idea] got together with a group of artists and dancers that normally wouldn’t have known each other,” El-Amin says. And while residents may not get to vote to spend the menu money on bus stop benches or the other ideas the transportation committee discussed, now at least they know what community members want, and the committee plans to follow up with city agencies to make sure residents’ service requests are being heard.

Overall, despite these setbacks, most of the participating ward residents so far seem happy with the process. “Before, the alderman might get input from people who might want things done on their blocks,” says Robert Daniels, from the transportation committee. “And now this gets people more involved.” El-Amin sees participatory budgeting as a small start to a new way of making decisions. “There’s an alarming trend nowadays where you have a lot of influence from folks that are up top—but once we really look at what the community needs, you see that the best way to find that out is to go to the community and ask them.”

This article is the first in “Direct Democracy in Chicago's 5th Ward,” a 5-part series that will follow the participatory voting process in the 5th Ward. This series is supported by a grant from the Local Reporting Initiative of the Chicago Community Trust.