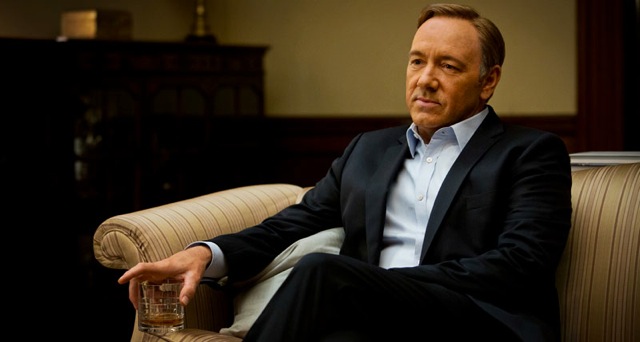 House of Cards and the Liberal Imagination

The agonizing death of American liberalism hasn’t been fun to live through, but it’s starting to make for good art. Take Netflix’s new series House of Cards, starring Kevin Spacey as Francis Underwood, a South Carolina politician scheming his way to the heights of power. It’s not only entertaining, but informative. Not for its accuracy—the series’ vision of American politics is skewed beyond recognition—but for what it gets wrong. House of Cards is a Freudian trip into the deep recesses of the liberal imagination.

Underwood is a Democratic majority whip on the warpath against his own party after losing out on an expected Secretary of State appointment. “Never again,” he tells his chief of staff, “will we allow ourselves to be put in such a position.” Outwardly Underwood takes his snubbing in stride—but he plans a political rise, destroying anyone standing in his way.

Like Tony Soprano or Breaking Bad’s Walter White, Underwood is a high-functioning sociopath who somehow keeps viewers rooting for him. The show makes clear, however, that its star isn’t tainting an otherwise pristine political environment, but rather playing by its perverse logic. Underwood meticulously plots, extorts and manipulates without any semblance of ideological motivation or political loyalty. It’s striking that a performance this cynical resonates so well just a few years after Obama’s hopey-changey revolution.

The depiction of American politics as dominated by corporations and awash in corruption has a certain progressive appeal. It’s a healthy antidote to the West Wing, also now streaming on Netflix. That Aaron Sorkin-created series, dripping with respect for the American presidency, served as a therapeutic fantasy for liberals during the dark years of the Bush administration. Every few scenes, a double-door swings open and President Josiah Bartlet (Martin Sheen) limps in and says something idealistic. An inspired staff springs to action. Tough choices are made as to whether or not to bomb this-or-that Third World country. Compromises are happily reached on domestic issues. Liberal House members offering any sort of resistance are portrayed as charmingly naïve. The Republicans who control Congress are thorny, but loyal, opponents. At the end of each episode the viewer is reminded that we are, indeed, all Americans after all.

After Obama’s election, liberals tried to make over Washington in The West Wing’s image—post-political, free of legislative rancor, fixed to the will of a single charismatic president. But they’ve run into a roadblock, an obstructionist Congress unbound by Sorkin-style civility.

No wonder so many liberals eat up the seediness in House of Cards. Underwood is a leading member of the House of Representatives, an institution beset for decades by low approval ratings and lurid scandals. It’s not just legislative policy that is called into question by House of Cards, but the motivations of those doing the legislating.

But today’s Congress is no place for a corrupt lone wolf. The Republican-led House is cohesive and earnestly political. It’s no surprise liberals find this confusing: They’re generalizing based on trends within their own Democratic Party. After the lean years of conservative advance in the 1980s, Bill Clinton’s “New Democrats” offered a policy vision fit for the neoliberal age—post-ideological, market-friendly and less wedded to entitlement programs.

This new brand of liberal politics relies not on consent through rigorous debate, but rather the charismatic leadership of centrists like Bill Clinton and Barack Obama. Supporters within and outside of Congress are mobilized to pursue and carry out the executive’s agenda, even when that agenda—like Clinton's welfare reform—runs counter to long-standing progressive values.

In contrast, the Republican majority in the House is a disciplined operation. Grover Norquist told the Conservative Political Action Committee last year that the next GOP president’s job will be simply to sign bills prepared by a Republican Congress. The Gingrich revolution that began two decades ago has taken effect. Earnest and politically motivated activist Republicans have turned the House of Representatives into a legislative body more parliamentary than at any time since Reconstruction. In the wake of the Tea Party revolution, there is no place for Underwood-style mercenaries, only foot soldiers for God and country.

House Republicans bind themselves to an ideological code, ironically enforcing a set of standards reminiscent of European parties—in which dues are paid, vows made and members occasionally expelled. Oaths like Norquist’s “Taxpayer Protection Pledge” unite Republicans in Congress while a network of think tanks, political action committees, and organizations at the state level (where Republicans control the majority of the governorships and assemblies) keep the conservative project setting the national discourse, even as demographics continue to skew in the Democratic Party’s favor. Votes simply can’t be bought by the highest bidder like they are in House of Cards.

Still, much can be excused in the name of compelling drama, even when it stretches the limits of believability.

But easy cynicism shouldn’t be mistaken for considered political critique. House of Cards’ message is simple: Bad men and women inhabit Capitol Hill. It’s superficially progressive. Like the series’ creators, liberals have a tendency to see the structures of American political life—our Constitution, for example—as being inherently sound instruments of the popular will, rather than systems meant to protect against mob rule. The shortcomings that do exist can then be attributed to the callous intentions of a few who are unwilling to put the national interest above their own personal whims. House of Cards plays into that narrative, promoting a vapid anti-establishmentism that poses no real threat to the status quo.