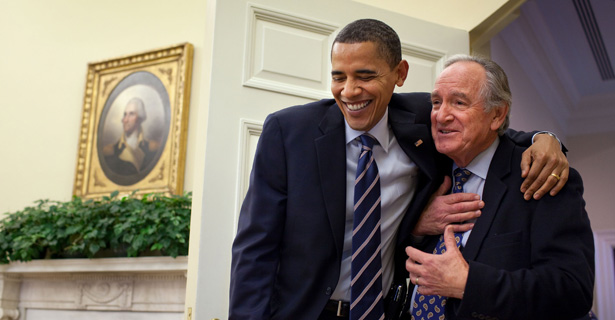 Sen. Tom Harkin (right) and Rep. George Miller have proposed raising the minimum wage to $10.10 per hour, but the White House will not say whether the Obama administration supports the measure. (The White House/Wikimedia Commons/Public Domain).

“If the minimum wage had kept up with inflation since 1968, it would be worth approximately $10.56 per hour today… Increasing the minimum wage to $10.10 per hour will increase GDP by nearly $33 billion over the course of three years as workers spend their raises in their local businesses and communities.”

WASHINGTON, DC—When President Obama proposed raising the federal minimum wage from $7.25 to $9 an hour in his State of the Union speech on February 12, the call came as a surprise to many wage-increase advocates.

Jen Kern, the minimum wage campaign coordinator at the National Employment Law Project, one of the largest advocacy groups on wage issues, says that her organization was consulted only “two hours ahead” of the State of the Union speech.

“We had been pushing him on this for years, since he mentioned it in his campaign in 2008, and never really heard anything from him,” says Kern. “So, yeah, we were surprised.”

“We were given little advance notice,” says Bill Samuel, government affairs director for the AFL-CIO, labor’s main coalition. “I think this is a strategy that the White House has often employed before a State of the Union. I believe that was intentional. It wasn’t a bad motive. I think they decided this should be good news.”

In another indication that the president didn’t consult with allies before selecting the $9-an-hour figure, Congressional Democrats Sen. Tom Harkin (Iowa) and Rep. George Miller (Calif.), who proposed an increase to $9.80-an-hour in last year’s legislative session, were already at work on a new bill to raise the minimum to $10.10. They issued a joint response to the State of the Union applauding the president’s move but questioning the $9-an-hour figure, saying: “While we believe the president’s proposal is lower than what is needed, there is no question that last night he threw the doors open for a robust discussion on the importance of raising the minimum wage.”

Harkin and Miller, who serve as the ranking Democrats on the Senate and House committees with jurisdiction over wage increases, officially introduced their $10.10 proposal on March 5. According to a press release issued by Harkin’s office, “If the minimum wage had kept up with inflation since 1968, it would be worth approximately $10.56 per hour today… Increasing the minimum wage to $10.10 per hour will increase GDP by nearly $33 billion over the course of three years as workers spend their raises in their local businesses and communities.”

The $1.10-an-hour difference between the president’s proposal and Congressional Democrats’ plan would have a cumulative effect. Under both plans, once the minimum wage rate is set, it will thereafter be adjusted as a percentage of inflation, and is unlikely to make a jump as big as $1.10 an hour in one year.

The lack of coordination between labor, the White House and Congressional Democrats appears to continue in the wake of the Miller-Harkin bill. The AFL-CIO isn’t sure whether the White House supports the increase to $10.10 an hour. “I have not heard anything positive or negative. It’s my assumption they are fine with a higher number if it’s possible in the House or Senate,” says the AFL-CIO’s Bill Samuel.

The White House would not respond to inquiries about whether it supports the Miller-Harkin proposal. However, in a blog post for The Huffington Post on Thursday, Acting Secretary of Labor Seth D. Harris reiterated the president’s call to raise the minimum wage to $9 an hour. White House spokesperson Matthew Lehrich told In These Times by email, “The President applauds Senator Harkin, Representative Miller for getting this debate started in Congress. He stands ready to work with Congress to pass legislation to increase the minimum wage as soon as possible—both parties should agree that hard-working families should not be living below the poverty line.”

Meanwhile, four weeks after the State of the Union, the President’s grassroots political advocacy arm, Organizing for America, has yet to meet with the AFL-CIO to discuss how to coordinate mobilizations on the state level to win the minimum wage fight.

“We haven't talked specifically about their strategy, but we will soon,” says Samuel. “We have a meeting coming up with OFA where I am sure this will be discussed, but we have not had any formal meetings. There has been some talk about using their grassroots structure of OFA and we are certainly preparing to use our grassroots structure.”

Organizing for America did not respond to request for comment.

Despite the apparent lack of coordination so far, labor is optimistic that the president will genuinely push for a minimum wage increase.

“The president is taking on the conservatives and most of the Republican Party to do this,” says Samuel. “It’s always exciting to be in a fight that certainly if we win can help so many people. I think they are serious about it.”