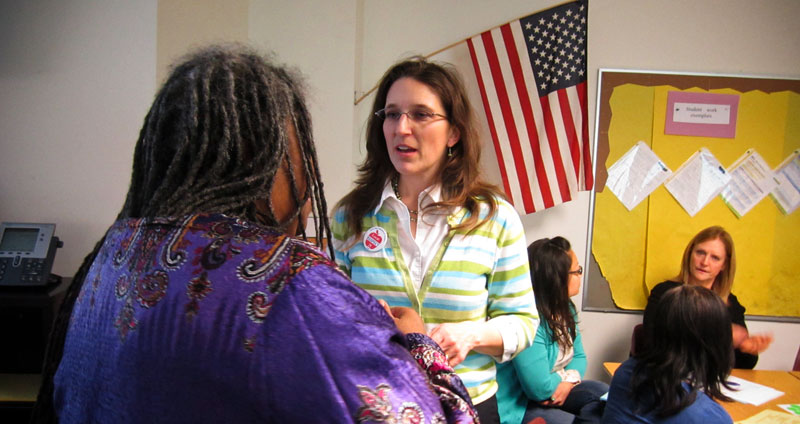 Inspired by Chicago, teachers unions across the country are looking to parents and communities for support.

'The idea behind the home visit is that you come as a guest in their home,' says Ricker. 'You start by asking only two questions: "What are your hopes and dreams for your child?" and "How can we support you?" '

On a Saturday afternoon in early March, some 60 people packed into a classroom at a technical high school north of Saint Paul, Minn., to discuss the strategic course of Saint Paul Federation of Teachers (SPFT) Local 28’s upcoming contract negotiations. The remarkable thing is that most of them were not card-carrying union members, or even teachers. They were students, parents and community activists concerned about their schools and the attack on public education.

The answers from the two groups mirrored each other. They called for wages and working conditions that sustain a teaching career and long-term professional growth, smaller class sizes, a focus on interdisciplinary and experiential learning, an emphasis on teaching over testing, and time set aside to allow students to learn, process and grow.

The session reflects what SPFT President Mary Cathryn Ricker calls the “new model” of community involvement, “with teachers, and parents, at the center of advocating for their profession, as opposed to teachers standing on the sidelines.”

The success of the 2012 Chicago Teachers Union (CTU) strike emboldened and inspired other teacher organizations such as the SPFT by demonstrating what strong community alliances can do. “We’re very conscious of the false narrative in our society—that what teachers want is different from what parents and communities want,” says Paul Rohlfing, an SPFT member who joined the Chicago strike and worked with 12 schools on the South Side. He witnessed Chicago teachers engaging their communities and explaining to parents the consequences of the war on public education. That engagement paid off: Even as the national media and mainstream politicians maligned the seven-day strike, polls showed Chicagoans supported the union, 55 percent to 40 percent. This support helped the CTU hold firm until a contract agreement could be reached.

Such alliance-building strategies are not entirely new—for years, unions from Saint Paul to Chicago to Oakland have been building relationships with community organizations. In the past, these relationships have been mostly transactional, such as buying a table at an annual fundraiser. But today’s existential threat to organized labor adds a new sense of urgency, as unions realize they must deepen community relationships as bulwarks of defense.

SPFT has been ahead of the curve. Since 2011, the union has embraced Minnesota’s open meetings law—which makes teacher contract negotiations open to the public—and encouraged the community to attend and testify. As many as 100 community members attended sessions of the SPFT’s last round of contract negotiations, which ended in January 2012. Community members influenced the final contract by securing a cap on class sizes.

The local is gearing up for its next round of negotiations in May, encouraging parents and activists to take part in these meetings as a way for teachers to learn from community members what their children need at school and for the community to understand what teachers need in order to help.

This strategy is spreading. The American Federation of Teachers (AFT) is now holding similar community town halls in 12 cities, and AFT has invited three community members and two union teachers from each of those cities to speak at its national conference in April.

Because SPFT believes community involvement must be reciprocal as well, the union hasn’t just been inviting parents into its territory; the union has also been inviting its teachers into their students’ lives outside of the classroom. “When an educator looks at an issue, we can almost always draw that line to how improving conditions [in the home environment] will improve teaching and learning conditions,” says Ricker.

A major validation of this approach came in 2007 when then-Republican Gov. Tim Pawlenty signed his “Cover All Kids” bill into law, which expanded healthcare access to approximately 40,000 more Minnesota children. Among those urging the legislation had been SPFT school nurses testifying at the Capitol about setting up triage care in their offices to deal with otherwise treatable afflictions, such as pinkeye, impetigo and even head lice.

SPFT is also working with housing justice groups such as Neighborhoods Organizing for Change to push for a legal moratorium on evicting families with school-age children during the school year, and teaming up with the Second Chance Coalition and TakeAction, Minnesota’s “Justice 4 All” campaign to emphasize rehabilitation, civic engagement and reintegration for criminals, instead of prison and punishment.

Local 28 has also partnered with the Parent/Teacher Home Visit Project, which began in Sacramento, Calif., 15 years ago and has since blossomed nationwide. “The idea behind the home visit is that you come as a guest in their home,” says Ricker. “You start by asking only two questions: ‘What are your hopes and dreams for your child?’ and ‘How can we support you?’”

If the Chicago teachers’ strike and SPFT’s previous contract negotiations are any indication, the community will reciprocate by supporting their teachers and public education system in the battles to come.