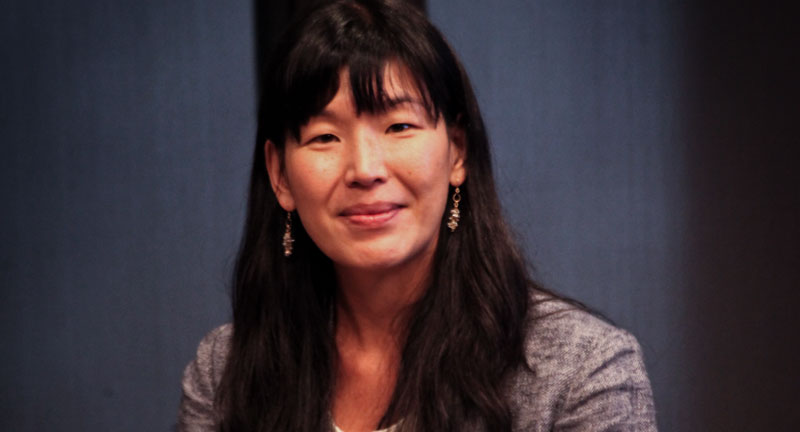 In organizing domestic workers, a feat once thought impossible, Ai-jen Poo has transformed the labor movement.

The way that we think about leading with love is through a deep connection to everybody’s fundamental human dignity. There’s a real power in that, and a power in human relationships that are built on respect and recognition of one another’s humanity.

Real-life nannies have never had much in common with Fran Drescher’s “flashy girl from Flushing.” The domestic workforce is overwhelmingly composed of women of color, many of them immigrants. Care workers often labor for long hours under grueling conditions. In many states, they lack even basic workplace protections, a result of their exclusion from collective bargaining under the 1935 National Labor Relations Act.

Ai-jen Poo, director of the National Domestic Workers Alliance, is out to change much more than labor law. Poo grew up watching her Taiwanese immigrant parents struggle to balance work and family, and she believes that good jobs for domestic workers would also help solve what she calls the nation’s “care crisis.”

Poo leads a 10,000-member strong coalition of nannies, caregivers and housecleaners whose accomplishments include passage of the nation’s first Domestic Workers Bill of Rights in New York in 2010. Named one of TIME’s “100 Most Influential People in the World” last year, Poo made her mark by transforming perceptions of what labor organizing should look and sound like—she speaks unabashedly, for example, about the importance of “organizing with love.” Poo spoke with In These Times from her New York office.

Domestic workers have long been thought impossible to organize. What’s allowed their movement to catch fire?

Domestic workers are a critical connective element—they have ties to their own families and communities, as well as the families and communities that they work for. In New York, it took almost seven years to finally have the [Domestic Workers Bill of Rights] signed. And domestic workers were at the core of the movement, but children also marched with signs that read, “Respect My Nanny.” Doormen, who see every day the long hours the nannies and housekeepers are working in their buildings, came out to support them. Many young people and LGBT organizations supported us from the beginning. Since then, we’ve gained power as elected officials who have mothers or grandmothers who are domestic workers have joined our coalition.

You also involve employers in your coalition, which is somewhat unusual for a labor organization. Is this ever controversial?

In a campaign for human dignity, there’s no such thing as an unlikely ally. We believe in creating the context for people to do the right thing. We assume that most people, if given the opportunity, will choose justice and equity and fair treatment.

Do you see the interests of domestic workers and employers overlapping?

Absolutely. In the care sector, one of the overarching problems that affects both workers and employers is that our economy has never fully accounted for [domestic] work. Caring Across Generations, the national campaign that we co-anchor with Jobs with Justice and several unions, is bringing Americans together to say, “Families need support, and workers need to have sustainable living-wage jobs.” We need a broader movement recognizing that care is fundamental and that we should all have access to it—including the workers who do this work and also have children who need care.

What experiences from your own life have led you to value care work?

My grandmother is my hero. She raised me when I was very little, and she taught me most of the values that have been important in my life. She lives independently in her own apartment and has a very good quality of life because she’s supported by a caregiver named Mrs. Sun. And after my grandfather had a stroke, Mrs. Sun also took care of him until he passed away. She helped him through a period where he was half-paralyzed and dealing with depression. She made life bearable for him. I see what an incredible gift it is to have somebody really committed to providing care for your family.

The idea that domestic workers are “just part of the family” often serves as a justification to deny them basic workplace protections. Is there a tension, when organizing domestic workers, in whether or not to employ sentimental rhetoric that could reinforce the idea that nannies or housekeepers are working out of love for the family?

Love isn’t necessarily soft, right? Martin Luther King Jr. said, “Power without love is reckless and abusive, and love without power is sentimental and anemic.” The way that we think about leading with love is through a deep connection to everybody’s fundamental human dignity. There’s a real power in that, and a power in human relationships that are built on respect and recognition of one another’s humanity. Love and anger aren’t opposites, either. Sometimes you have to draw the line and fight, and that’s also about love.

Domestic workers are at the forefront of a surge of creative organizing by low-wage workers. Right now this is happening primarily outside of traditional union structures. But do you see formal union recognition as an eventual goal for domestic workers?

The reality is that the traditional model of collective bargaining under the National Labor Relations Act framework doesn’t quite fit for our workforce. Even if we weren’t excluded from the NLRA, there’s no collective, and there’s no one to bargain with—none of the traditional kinds of assumptions are there.

In the 90s, when I first started organizing with domestic workers, it was seen as a shadow, marginal workforce. But as we look around, more and more of the American workforce is dealing with some of the very same dynamics: isolation, part-time and contingent work, vulnerability and job insecurity. And so if we can figure out the models that work for domestic workers, we can contribute that to a broader conversation about reinventing the labor movement for the 21st century.

Likewise, what can the greater visibility of care workers contribute to feminism? Some feminists have been criticized for focusing on professional women who rely on the help of domestic workers, rather than on those workers.

We need a new economic vision in this country and around the world, period. Any vision for the future really needs to revalue two types of resources—the planet’s natural resources and the work that goes into caring for families. These resources have been undervalued and exploited, and it’s hurtling us into crisis.

The unsustainability of the economy is being borne by women, at multiple levels. They’re now more than half of the paid workforce, and they’re still responsible for the lion’s share of family caregiving and management. By making visible all the ways that women are currently holding things together, we can also tell the story of the kind of economy that we need: more workplace flexibility, paid leave and universal childcare.

So I think this is an opportunity not just to rebuild the women’s movement, but to position women’s experiences of a very unsustainable economy at the center of a new economic vision.

A report co-published by your organization last year found that 35 percent of domestic workers are noncitizens, and 46 percent are foreignborn. What impact could immigration reform have on the movement?

I believe this is the biggest organizing opportunity of generations—the potential for 11 million undocumented people to come out of the shadows and the potential to bring millions and millions of workers into the labor movement. For many domestic workers, not living in fear of raids or deportation would be game-changing.

You’re regarded as a visionary in the labor movement. That’s not an easy feat for a young woman of color. What advice do you have for young organizers?

I’ve been very fortunate to have mentors who were willing to share lessons, give me some historical perspective and remind me that nothing worthwhile was ever easy. The highs are only as high as the lows get. I think it’s also important to take a step back every so often and remember that it’s a long road. But things will take shape when you trust in the power of workers and a vision for a more dignified, caring world for all of us.