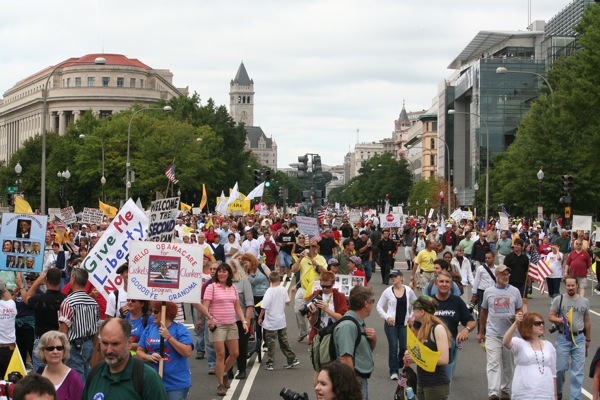 Progressives are too quick to believe that the Tea Party hurts Republicans.

Liberal strategists fail to appreciate that the Tea Party’s ideological discipline, nurtured by Republican incumbents’ fear of being 'primaried,' has turned the Boehner House into a formidable and effective obstacle to Democratic initiatives.

On February 18, Richard Viguerie, the godfather of the New Right, announced the creation of the “Liberty Prize”—a $10,000 award for the Tea Partier with the best plan to wrest control of the G.O.P from “establishment big government Republicans.” Viguerie’s website, ConservativeHQ.com, explains: “Limited government, constitutional conservatives … at the grassroots level have the ideas and principles, as well as the numbers, political skills and talent to run the GOP. What we have lacked is a coherent, well-thought-out blueprint for taking over the Republican Party.”

But these liberal strategists fail to appreciate that the Tea Party’s ideological discipline, nurtured by Republican incumbents’ fear of being “primaried,” has turned the Boehner House into a formidable and effective obstacle to Democratic initiatives. Republican intransigence may disaffect some voters, but it excites both the Tea Party faithful and the wingnut donor class.

Still, the Koch brothers, Viguerie and the Tea Partiers understand that the coalition that elected and then re-elected Barack Obama president poses a threat. Were this alliance—composed of a majority of women, young people, the poor, LGBT Americans, Latinos, African Americans, Jews and the highly educated—to get serious about challenging the GOP for control of Congress, the Republican future would look bleak.

To prevent this, the Right is working to make the act of voting so arduous that potential Democratic voters will choose to stay home. Meanwhile, the conservative media paints Congress as so dysfunctional—and our elected leaders so ineffective—that disillusioned citizens will decide to tune out. A Public Policy Polling survey in early January found that 85 percent of Americans have an “unfavorable” opinion of Congress. Indeed, of those polled, 67 percent had a “higher opinion” of head lice than of Congress.

Unfortunately, Democratic leaders in the White House and on the Hill play into the GOP’s hands by ceding discursive ground to the enemy; Obama and his lieutenants failed to fight for the healthcare public option, and many powerful Democrats seem disturbingly amenable to regressive tinkering with Social Security. The left wing of the Democratic Party often attributes these stances to spinelessness—but it may be time to admit that many Democratic bigwigs simply aren’t inclined to defend progressive politics.

For proof that the Democrats have alienated a segment of their base, look no further than an August 2012 poll by USA Today and Suffolk University of citizens who said they were unlikely to vote on Election Day. That survey found that those who were registered to vote—but were not planning to—would have supported Obama over Mitt Romney by two to one, if pressed. Yet 59 percent of all those who said they were planning to stay at home explained that they didn’t “pay much attention to politics” because “it’s a bunch of empty promises.”

The one bright spot: The Congressional Progressive Caucus, as Cole Stangler reports in this issue's cover story, is committed to bringing a progressive grassroots vision to the mainstream.